"Words have no power to impress the mind without the exquisite horror of their reality." -- Edgar Allen Poe

"Mission Accomplished!" That's what President Trump tweeted in announcing missile strikes against Syria. Yes, the mission was accomplished -- tactically. Missiles were launched and targeted sites were hit. But strategically, the more likely outcome is "Mission Prolonged!"

The United States seemed poised only a few weeks ago to exit the Syrian theater of operations. But if you listened to French President Emmanuel Macron on Sunday, he inferred that the allies had been able to convince Trump to reverse that decision and remain in Syria for the longer haul.

Trump indicated on Sunday that the United States will soon expand sanctions against Russia for its support of Bashar al-Assad's regime in Syria. Nikki Haley, the U.S. Ambassador to the United Nations, said as much as she hit the Sunday morning talk-show circuit.

But do you know what else? Syrian military forces have allegedly already resumed their bombing of Syrian people in the aftermath of those American, French and British missile strikes. Of course, hopefully, our missiles destroyed all of the chemical weapons. Hopefully.

The Russian ruble has taken it in the teeth Monday morning, dropping more than 1.5% against the U.S. dollar. Analysts expect Russia to respond to the West's moves with sanctions of its own. Some observers even feel that a Russian response will be asymmetrical -- think "Internet hacking."

Financial markets are already or will react in a couple of ways:

My personal thoughts on this are that although French President Macron might feel he's convinced Trump to remain in Syria, Trump is a populist rather than an ideologue. He's never married to one idea past its point of usefulness. The longer we stay in a bad neighborhood, the greater the chances that we make a mistake.

So, I'll wait for my spots if we do see weakness in defense and energy. But I'm far more likely for the time being to add to my holdings in these sectors rather than take profits.

Schlumberger (SLB) plans to report earnings prior to the opening this Friday, and there's no more honest an assessment of oil prices and industry trajectory that I know of than CEO Paul Kibsgaard's communications around earnings. Stay tuned on this.

Macro will remain front and center this week after last week's Consumer Price Index left the probability of a fourth U.S. rate hike this December at an elevated 36%, according to future markets.

Attention will now turn to Monday morning's March retail-sales data as much as anything else. Analysts expect a nice rebound in this space, at least at the headline.

Keep in mind that the retail-sales data measure U.S. consumer health as much as anything else does, but that this number has printed either flat (after revision) or contracting for three straight months.

Tuesday will bring March numbers for U.S. housing starts and industrial production (which is coming off of a very hot February). As something of a macro trader, my focus with industrial production will be on capacity utilization and just how far it falls. An ability to hang on to 78% here would seem incredibly encouraging.

Of course, this week will also be about earnings. Investors reacted in a negative way to what looked like positive headline data Friday from Citigroup (C) JP Morgan (JPM) , and Wells Fargo (WFC) .

I know it's nitpicking, but although I found JPM's trading revenue encouraging enough to justify my long of Goldman Sachs (GS) , I also found Citi's investment-banking results to be a touch of a kick in the pants. The truth is that financials haven't acted all that well since their last quarterly earnings releases, and then they sold off Friday on what looked like positive information overall.

My instinct tells me that as earnings season progresses, these names will heal themselves and rally in gradual fashion as long as the broader market performs better on earnings season than these banks did. Still, it might be wise to cover your banking longs with some long-dated out-of-the-money calls if you notice acceptable premiums.

Why be positive here? Easy -- earnings are growing across the market. Yes, I know that company managements are beating us half to death with their glorious expectations. But more important than that will be announcements about new stock buybacks and dividend hikes. Such moves are "bankable," unlike earnings growth that's based on U.S. tax cuts or synchronized global growth that might not be permanent.

U.S. corporations bought back $525 billion of their own stock in 2017, and JPMorgan analyst Dubravko Lakos-Bujas recently wrote that "we are expecting record buyback announcements during this earnings season given further clarity on tax reform, equity multiples are broadly attractive, and companies likely to replenish buyback programs after the recent sell-off."

Lakos-Bujas expects that U.S. companies will repurchase roughly $800 billion of shares this year while ramping up dividend payments to a record $500 billion. This might be more important than anything else -- and the single-best reason to maintain a net-long portfolio. Rock on!

Chart Of The Day: Netflix

Netflix (NFLX) reports earnings Monday after the bell, and the industry is looking for $0.63 in earning per share. Whisper numbers are running a penny higher than that, but it won't be about the EPS number, gang. It's all about revenue and subscriber growth for this firm. 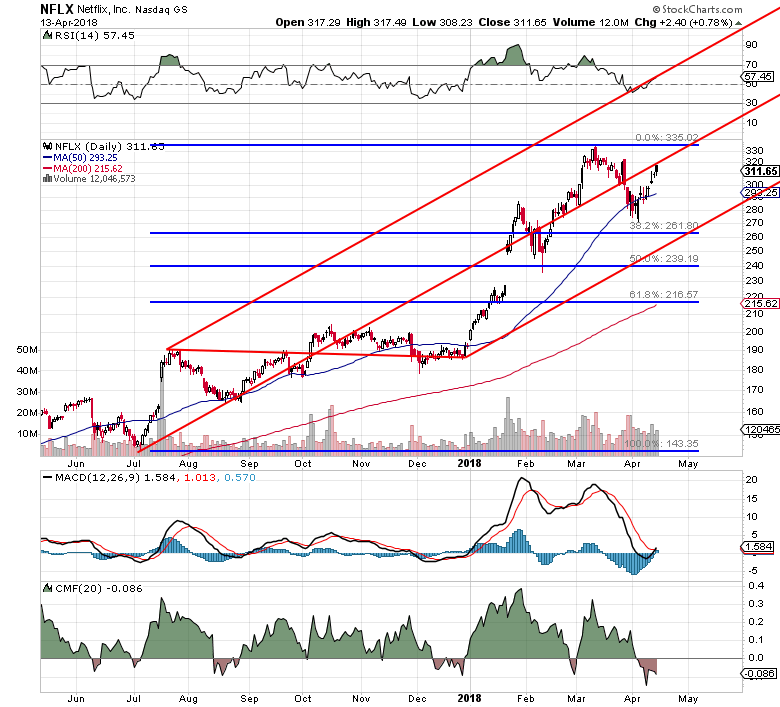 The stock's early April bounce for the most part bounced to where it was supposed to. What I see now is the central trend line on the pitchfork pattern above acting as a pivot rather than as support or resistance.

Add it all up and my thought is that Netflix becomes unpredictable in response to nice earnings. (Lousy earnings would be easier to predict.)

My warning to small investors would be this: Although I'm often a proponent of writing options rather than buying them, Netflix offers tremendous potential get yourself run over.

If you go the options route, I think using strike prices at least $30 away from the last sale and settling for three of four bucks would be more prudent than keeping it tight and trying to score $14 or $15. However, a simple equity stake in Netflix might be less risky for the retail trader than selling even one April 20-dated option.