We have not reviewed the charts and indicators of FMC Corp. (FMC) since September, where we wrote, "prices are still pointed up but with bearish divergences from our momentum indicator. I want to "be prepared," not in the Boy Scout sense, but in the sell-stop sense. I would recommend raising sell-stops to a close below $81..." Prices struggled to post new highs in January and then corrected lower into late March. It looks like we can have a decent recovery rally in the weeks ahead. Let's review some updated charts now.

In this daily bar chart of FMC, below, we can see that the retracement of the past three months started with a gap to the downside with heavy turnover or volume as prices broke below the flat 50-day moving average line. Prices rebounded later in January and then failed at the underside of the 50-day average line. The weakness continued and the 200-day moving average was broken and bounces to the underside of that indicator also failed.

The daily On-Balance-Volume (OBV) line, above, declined in January and February signaling more aggressive selling. The OBV line has improved since early March, suggesting more aggressive buying at these lower price levels. FMC managed to find some support in the $75 area in late March and early April -- this area was a former area of resistance back in June and July.

In the bottom panel is the 12-day price momentum study showing a bullish divergence with equal lows in February and late March even though prices made lower lows. This divergence is foreshadowing a potential price recovery in the weeks ahead.

Meanwhile, in this weekly bar chart of FMC, below, we have mixed signals. Prices are below the flattening 40-week moving average line. The weekly OBV line has been steady in recent months even as prices weakened and this suggests that buyers back in 2015 and 2016 have largely stayed with those long positions. In the lower panel is the Moving Average Convergence Divergence (MACD) oscillator which is below the zero line in bearish territory but it has begun to narrow to potential cover shorts buy signal.

In this Point and Figure chart, below, we have just price changes to look at -- no volume and no gaps. This chart is currently projecting an upside price target of $94.19. This is not a new high or breakout but it is a recovery rally. We can re-evaluate things again when or if we reach the $94 area. 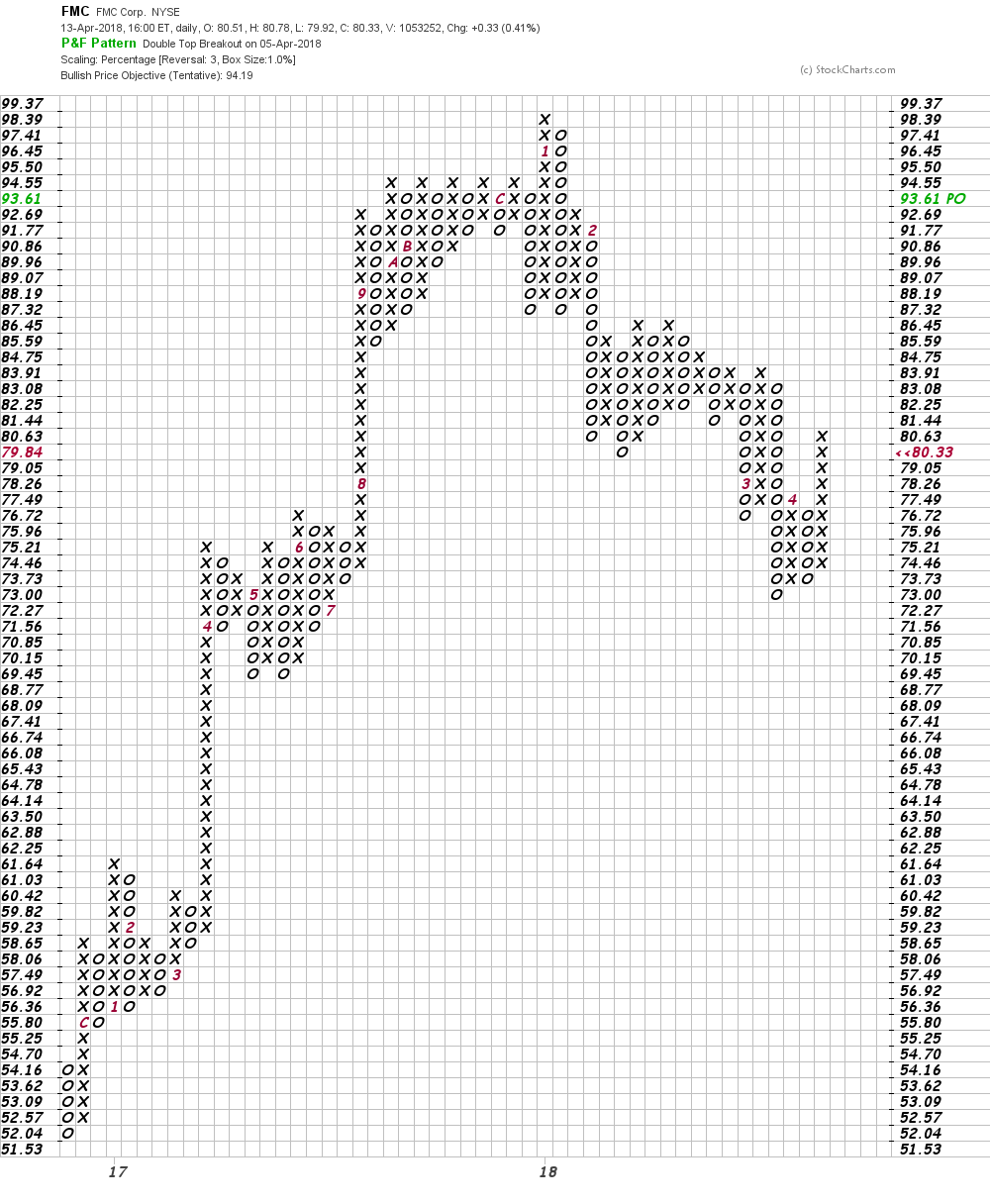 Get an email alert each time I write an article for Real Money. Click the "+Follow" next to my byline to this article.
TAGS: Investing | U.S. Equity | Basic Materials | Consumer Staples

China Is Selling State Reserves, So What Is It Trying to Tell Us?

China buys low and sells high when it comes to commodities, which makes its latest moves worth watching for telltale economic signs.