Investors can own a basket of successful Japanese robotics firms through two exchange-traded funds writes Tony Daltorio, editor of Investors Alley's The Market Cap and frequent contributor to MoneyShow.com.

When most of us think of robots, we think of the friendly pair of R2-D2 and C-3PO in Star Wars. Or more darkly, of dangerous androids from the Terminator movie series.

The reality is that the Age of Robotics is already upon us... the future is here. Robots of all kinds are already among us. Think Alexa, drones and driverless cars.

And let's not forget about the tiniest of robots that are reminiscent of the 1966 science fiction film Fantastic Voyage. In February, researchers from Arizona State University and the National Center for Nanoscience and Technology of the Chinese Academy of Sciences injected nanobots made from a folded sheet of DNA into the bloodstream of mice. These nanobots targeted the blood vessels around cancerous tumors, injecting them with blood-clotting drugs to cut off their blood supply. According to the study, published in Nature Biotechnology, the treatment was successful in shrinking the tumors and inhibiting their spread.

There are also a growing number of robot co-workers known as collaborative robots or cobots. Consider Amazon (AMZN) and its many fulfillment centers around the world. In 2012, it bought robotics start-up Kiva for $775 million. Today, there are more than 100,000 of Kiva's machines globally working in conjunction with Amazon employees, alleviating not only mundane but also potentially hazardous tasks such as lifting a heavy load.

It isn't a stretch to think that cobots will become the norm in many industries around the world. But that doesn't mean people will lose their jobs. The industry with the highest usage of robots - the automotive industry - continues to have rising employment globally.

There is a certain logic to this. Researchers at MIT found that robot-human teams were about 85% more productive than either humans or robots alone! And the robot technology manager at the Danish Technology Institute, Søren Peter Johansen, says that automating the simplest 80% of a production process is significantly cheaper than a fully automated solution. The remaining 20% of the work will be done by human co-workers.

Adding robots to the workforce will turn out to be a win-win situation.

Robots: The Next Generation

The old-school robots have been used mainly by the auto industry, with little uptake from other types of manufacturers. That's why sales of cobots are still a very small part of overall global industrial robot sales, accounting for only about 5%.

I don't have to tell you that this means there is a very large remaining market that is wide open for the introduction of next-generation cobots. That line of thought is supported by a 2017 study from Research and Markets that forecast that the cobot market will grow by more than 40% annually over the next five years.

This growth will be sped along by the continuing drop in price for industrial robots. According to research from ARK Invest, by 2025, robot costs will drop by about 65% to only $11,000. All thanks to technological advances in machine learning, machine vision and connected sensors.

Some question whether falling prices for robots will adversely affect companies selling robots. Based on history, the answer is no. During the past decade, robot prices have dropped by about 40%. Yet, gross margins for the world's leading robot manufacturers such as ABB (ABB) , Fanuc  (FANUY) and Yaskawa Electric (YASKY)  have actually been stable to improving.

Not surprising to me is the fact that China is leading the way in this robot revolution. Robotics is one of the industries among the government's ambitious Made in China 2025 program whose aim is to position the country at the forefront of new manufacturing technologies.

Despite the recent imposition of U.S. restrictions on technology transfers to China, the country is feverishly automating its factories in response to a labor shortage, rising wages and growing macroeconomic confidence. A forecast from the International Federation of Robotics predicts that from 2018 to 2020, sales of robots in China will jump between 15% and 20% annually.

The main driver of this growth in China is its electrical and electronics industries. Among these industries are the semiconductor and battery manufacturing sub-sectors, which are also a focus of the Chinese government's Made in China 2025 plan for its economy's future.

However, at the moment, China is not the leader in robot technology and neither is the U.S. The leader, as it has been for decades, continues to be Japan.

According to a November 2017 report from the International Federation of Robotics (IFR), Japan delivers 52% of the world's supply of industrial robots. The production capacity of Japanese suppliers hit 153,000 units in 2016, the highest level ever recorded. Japan also exported a record number of robots (115,000) in 2016 that were worth an estimated $2.7 billion.

Many of these robots were exported to China. That country, since 2013, has become the largest buyer of industrial robots. In 2016 alone, sales soared by 27% to 90,000 units -- a single country record. The IFR estimates that robot sales in China will rise to 160,000 units in 2019. In other words, China's automating of its factories has been and continues to be a bonanza for Japanese robotics companies.

In 2018, thanks to China, Japanese production of industrial robots will grow by 10% and hit for the first time ever the 1 trillion yen (about $9 billion) level. This follows a very robust 2017 when output soared 30% to about 900 billion yen. Robot exports from Japan to China soared nearly 58% to 227.5 billion yen, accounting for 40% of all of Japan's overseas robot exports.

These numbers come from the Japan Robot Association. Its chairman, Fanuc CEO Yoshiharu Inaba, said in January, "Output could reach 2 trillion yen in three to five years if things go smoothly." He added, "Demand will expand for more than five years. The 2 trillion yen mark is probably just a checkpoint." By the way, Fanuc is the world's largest maker of industrial robots. 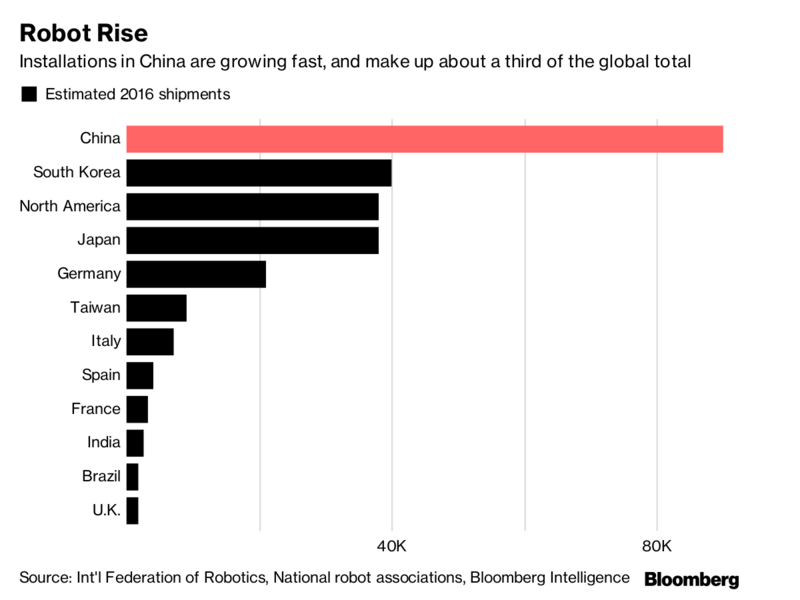 For example, let's look at Yaskawa. China currently supplies a quarter of its consolidated sales, yet the company plans to grow its Chinese presence even more. Besides selling its own robots, Yaskawa will sell machine controllers and servomotors (key components for robot control) to several leading Chinese robot manufacturers. This program will be similar to the Intel Inside campaign in that Yaskawa is considering allowing Chinese firms to use the Yaskawa brand and sales channels when they sell robots containing its parts abroad.

Importantly, as part of this program, Yaskawa will offer controllers and servomotors for the types of robots that the company does not build, such as SCARA (selective compliance assembly robot arm) robots, as a way to prevent competition with its own products.

You may be wondering what is the best way to invest into this fast-growing sector. One good option is to buy a company like Yaskawa Electric. Even though it trades over-the-counter here in the U.S., its ADRs (American depositary receipts) are fairly liquid.

The other option is to own a basket of these Japanese robotics firms through an exchange-traded fund. Two such ETFs are the Global X Funds Robotics & Artificial Intelligence ETF (BOTZ) and the ROBO Global Robotics & Automation Index ETF (ROBO) .

The most important difference between the two are the differences in their portfolios. BOTZ has a more concentrated portfolio, with only 29 stocks versus the 93 stocks in the ROBO portfolio.

Another major difference is the geographic exposure of the two funds -- with my preference for exposure to the leaders in the industry, which are Japanese -- here BOTZ has the upper hand with about 51% of the fund in Japanese stocks versus only 28% for ROBO.

However, when it comes down to the actual stocks in the portfolios, both are outstanding. Here are the top 10 positions for each ETF:

Over the past year, the two funds have gained 38.52% and 29.88%, respectively, both easily outperforming the S&P 500 index. With the bright future I see for the robotics industry, I expect the outperformance to continue for many years.

-- This article was originally published on April 12.

Get an email alert each time I write an article for Real Money. Click the "+Follow" next to my byline to this article.
TAGS: Investing | U.S. Equity | Technology | ETFs | Funds | China | Markets | How-to | Stocks