The position of some of the technical indicators for Enbridge, Inc. (ENB) could allow for a rally in the next few weeks. Let's drill down on the charts to see how things look today.

The daily On-Balance-Volume (OBV) line has improved the past six weeks and tells us that around the $30 area buyers have become more aggressive. The 12-day price momentum study in the lower panel shows a pattern of rising momentum lows which is a bullish divergence when compared to the lower price lows from February to late March.

In this weekly bar chart of ENB, below, we can see that prices are below the declining 40-week moving average line. The weekly OBV line has been in a decline since early 2017 and tells us that sellers of ENB have been more aggressive for a while now.

The trend-following Moving Average Convergence Divergence (MACD) oscillator has been in a bearish mode below the zero line since last April but the two moving averages that comprise this oscillator have begun to narrow. A cover shorts buy signal could develop in the weeks ahead.

In this Point and Figure chart, below, we can see an upside price target of $36.52. 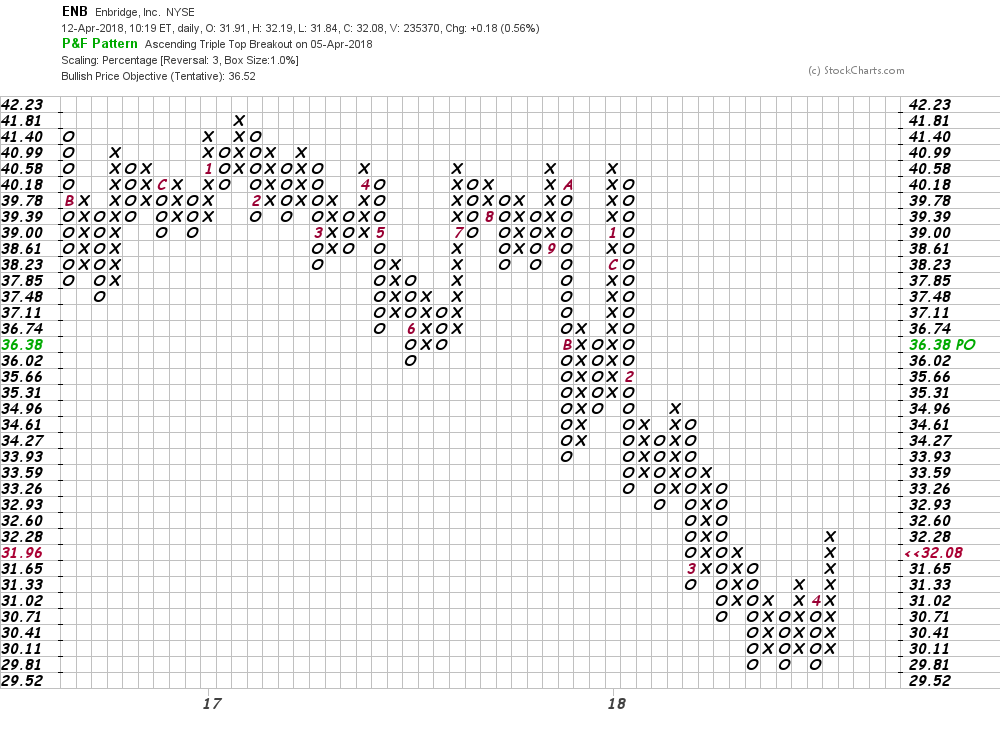 Bottom line: ENB is extended on the downside with some improving technical indicators. This points to the potential for ENB to stage a rally back to the $37 area. Aggressive traders who are comfortable with acting on a "counter-trend rally" could probe the long side of ENB risking below $29.50.

Get an email alert each time I write an article for Real Money. Click the "+Follow" next to my byline to this article.
TAGS: Investing | U.S. Equity | Energy | MLPs | Stocks

A Failure to Recognize the Obvious Truths

Prices for everything are rising and it's a vicious, vicious circle. Here's where to invest now.