Looking at the performance of my benchmark for MicroCaps, the Russell Microcap Index RUMIC, shows a very mixed picture depending on the timeframe one selects. 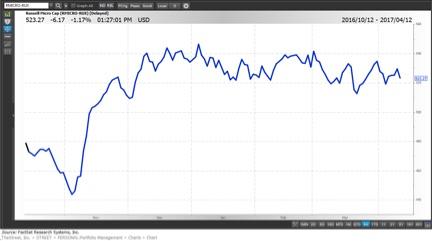 The risk-on attitude of the "Trump Jump" powered microcaps in the days following the election. Like most sugar highs, though, that wore off, and if we narrow the timeframe slightly -- using the beginning of 2017 instead of Election Day as our base point -- we see a totally different picture. Thus far in 2017 the RUMIC has posted a slight decline -- (-0.86%) -- versus the solid 5.1% gain for the S&P 500 and the torrid 11.0% gain posted by the NASDAQ. 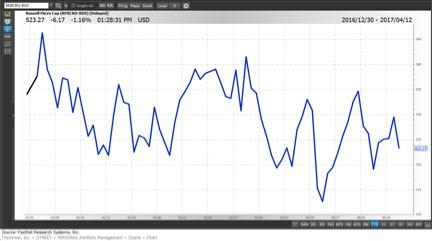 So, what happened? Have investors suddenly lost their tolerance for smaller stocks?

Actually, the RUMIC has outperformed the other averages in the past month, so it was really the period in January through early March that saw the most pronounced risk-off sentiment in the markets. That was, to me anyway, a clear case of "fear of the Fed." Yes, the waiting is the hardest part, but in reality the FOMC's decision on March 15th to raise by 25 basis points and signal two more hikes for the balance of the year was not terribly hawkish.

So, if the Fed's statement itself didn't take away the punchbowl, there were some rumblings in that meeting's minutes of a potential for the Fed to begin trimming its enormous balance sheet. The Fed's assets have grown to an almost incomprehensible $4.23 trillion as of last week's report.

The possibility of more supply of Treasuries in the market plus a few soft macro data points, including the March non-farm payrolls report, have changed the shape of the yield curve. That's the key factor to follow, not the Fed Funds rate. Looking at a chart of the spread between 2- and 10-year Treasuries shows a pronounced move during the week of the last FOMC meeting. The bond markets had been steadily pricing in a 115-130 basis point 2-10 spread for the first 10 weeks of 2017. But the air of complacency was shaken by the Fed and by the Trump Administration's inability to push its American Health Care Act through Congress.

So, the 2-10 spread has contracted dramatically in the past few weeks, and now sits at 108 basis points. Granted, this is still higher than the 80-100 basis points that prevailed in the second and third quarters of 2016, but remember simple economics. A steepening yield curve means the bond markets are expecting economic growth to accelerate, while a flattening yield curve shows that growth expectations are being tempered.

That's exactly what has happened, isn't it? In January and February, the Trump Jump was telling us tax reform would get done quickly and smoothly on the heels of the passage of the AHCA, and that would allow corporate profit growth to accelerate. While I believe that meaningful reform of the tax code (for the first time in 31 years) will in fact happen this year, the AHCA drama taught us that nothing in Washington DC ever happens as fast as the markets want it to.

So, that brings me back to my contrast of the markets' performance since the election and since mid-March. I described the RUMIC as the star performer between the election and today, but there is actually one sub-index that outperformed even that torrid performance. Since November 8th, the iShares Financial Sector Select SPDR  (XLF) has returned 17.1%. Blue Chip financials such as JPMorgan Chase (JPM) and Goldman Sachs (GS) went parabolic in the early days of the Trump Jump, but those stocks follow what happens at the Fed's digs in the Eccles Building much more closely than they do the machinations of the White House.

So, as the 2-10 spread has narrowed sharply, bank stocks have absolutely gotten crushed. The XLF has fallen 5.7% in the past month, which makes its post-election gain all the more remarkable. I always follow the second derivative, though, and it is clear that the game has changed for financial stocks with a more-responsive Fed and less hope of a Trump-starting of U.S. economic growth.

In tomorrow's column I will drill down into the impact of flattening yield curve on the MicroCap sector.

Get an email alert each time I write an article for Real Money. Click the "+Follow" next to my byline to this article.
TAGS: Investing | U.S. Equity | Regulation | Markets | Treasury Bonds | Rates and Bonds | Financial Services | Economy | Politics | Funds

Watch Out Below, Mastercard Is Breaking Support

Do not fight the tape.

Visa ranks as the ninth most important stock in the benchmark.