HCA Healthcare, Inc. (HCA) made a nice upside rally in the fourth quarter of 2017. Prices have traded sideways so far in 2018 and the question becomes, "what's next for HCA?" Let's put on our airy gowns and check out the charts of this hospital stock recently mentioned by Jim Cramer in his 15 Sectors to Buy on a U.S./Chinese Trade War article on Real Money.

In this daily bar chart of HCA, below, we can see a sideways to lower trend from last April to October. Prices spent as much time below as above the 200-day moving average line and the 50-day line had a negative slope from August through November. In December the chart strengthens with closes above both moving averages and the 50-day line turning up. In early January the shorter 50-day average crosses above the flat 200-day average for a bullish golden cross. Currently, HCA has pulled back and has been trading below the rising 50-day line.

The daily On-Balance-Volume (OBV) line made a low in October and continued higher into March, confirming the price gains and telling us that buyers of HCA were more aggressive. The OBV line has softened since mid-March along with prices. The trend-following Moving Average Convergence Divergence (MACD) oscillator crossed to the downside in February with a take profits sell signal and fell below the zero line last week for an outright sell signal.

In this weekly bar chart of HCA, below, shows a pattern of higher highs and higher lows from early 2016. Prices are above the rising 40-week moving average line but some weak spots are showing on the indicators. The weekly OBV line has declined in the past month pointing out more aggressive selling. The weekly MACD oscillator has crossed to the downside from above the zero line for a take profits sell signal on this longer time frame.

In this Point and Figure chart of HCA, below, we can see a pattern that could go either way right now. Prices have meet an upside price target of $101 but chart support around $95 could hold. A rally above $104 would open the upside again. If $95 is broken then more support lies around $90. 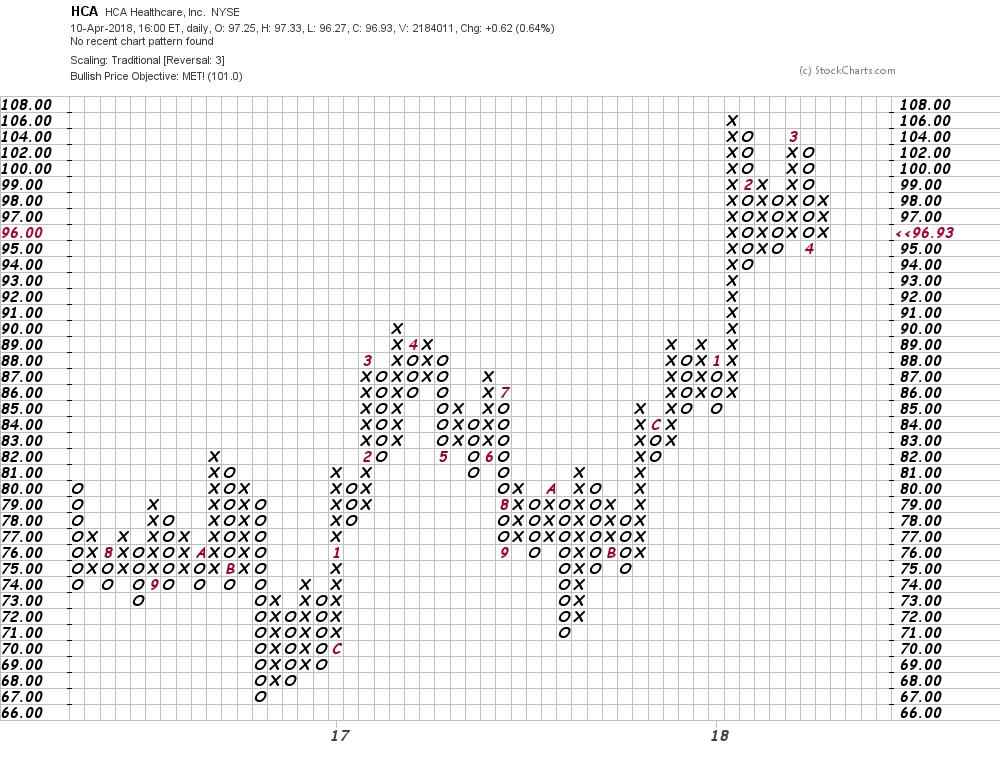 Bottom line: The major long-term trend for HCA is up but we could have a correction within that trend to around $90. Investors could consider that pullback as an opportunity to add to existing long positions. Short-term traders should wait to buy strength.

Focus on price action but increase vigilance. Be ready to react if fundamental issues start to hit the market in a more systematic way.

Check out the Dow Transports and the Dow Industrials.

A Day Late and a Dollar Short?

With all this chatter about the buck, why didn't anyone notice there was no lower low in the Dollar Index on Wednesday vs. last week?

In my hunt for new buys, there were simply too many charts that required too much chasing.