When you look at the movement of stock prices too closely you sometimes miss trades or investments. For example, you need to look at the bigger picture on Tenet Healthcare Corp. (THC) to see the base formation and a pullback as a potential buying opportunity. Join me this morning in looking at Tenet, which was mentioned by Jim Cramer in his "15 Sectors to Buy on a U.S./Chinese Trade War."

In this daily bar chart of THC, below, we can see a strong rally beginning in December. It looks like prices stalled last month and have begun to correct to the downside. Do we liquidate longs from lower levels? Or will this be a pullback within a longer-term move? Continue.

The daily On-Balance-Volume (OBV) line was steady from August through November when the price to THC was weak telling us that whatever selling was going on, others found reasons to become buyers. The OBV line turned up in early December signaling that buyers had become aggressive.

The trend-following Moving Average Convergence Divergence (MACD) oscillator moved above the zero line in December for an outright go long signal and is still above the line in bullish territory.

In this weekly bar chart of THC, below, you get the bigger picture. Prices turned down from $60 back in 2015 but they have been bottoming in the $15-$10 area since late 2016. The volume of trading has been heavy around the lows of 2017 signaling a shift in ownership. The weekly OBV line bottomed in April of 2017 and has been on the rise ever since -- a strong sign of new accumulation. The weekly MACD oscillator gave a third cover shorts buy signal this past December and is now in buy territory.

In this Point and Figure chart of THC, below, we can see the base pattern and breakouts at $21 and $22. Prices have reached an upside price target of $22.50 and may need some further consolidation or sideways price action before further gains. 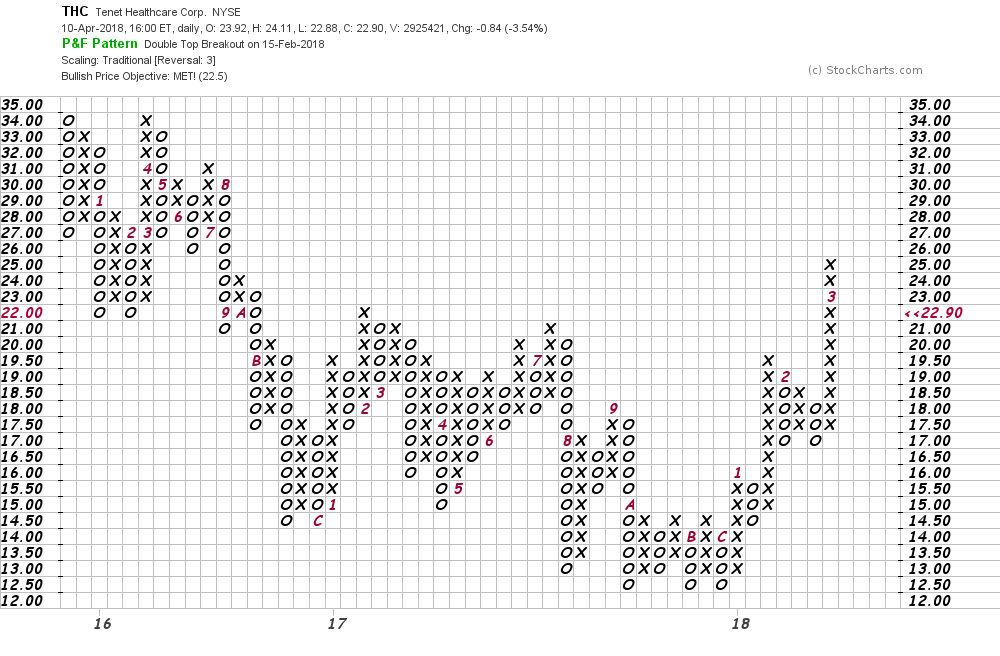 Bottom line: In the short run THC could correct further to the downside, perhaps to fill a gap in the $21-$19 area. THC is likely to stay above the rising 40-week moving average line making, the base pattern bigger and thus able to support a larger rally in the future. Risk below $17.