In this daily bar chart of UAL, above, we can see prices are below the declining 50-day moving average line. UAL did not break this trend-following indicator today -- it broke below at the beginning of March. A rally/bounce in UAL from mid-March stopped at the underside of the declining 50-day moving average this month. The daily On-Balance-Volume (OBV) line has been soft since early March. The Moving Average Convergence Divergence (MACD) oscillator gave an outright sell signal last month when it declined below the zero line. A cover-shorts buy signal happened two weeks later but the MACD oscillator is still below the zero line.

In this weekly chart of UAL, above, we have mixed signals. Prices are above the rising 40-week moving average line. The weekly OBV line is neutral. In the lower panel is the weekly MACD oscillator, which crossed at the end of February to a take-profits sell signal. 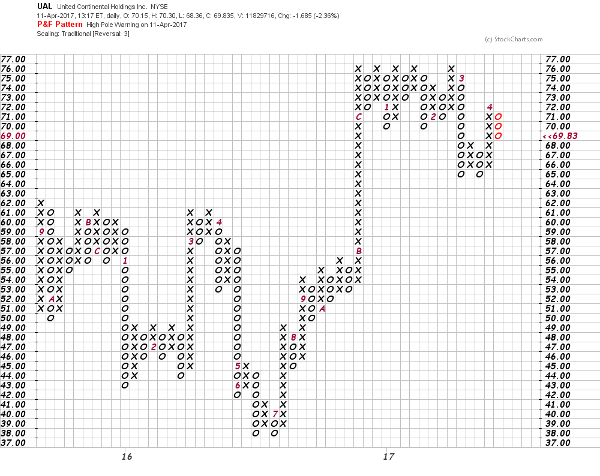 In this Point and Figure chart of UAL, above, we can see there is a considerable amount of resistance overhead for UAL in the $73 to $76 area. There is a little support in the $67-$65 area but not a lot.
Bottom line: In this age of social media, it is an open question if people vote with their feet in reaction to UAL's current controversy, but regardless of how this plays out, it looks like UAL is vulnerable and could retest the $65 level with the possibility of a deeper decline toward $60.
Get an email alert each time I write an article for Real Money. Click the "+Follow" next to my byline to this article.
TAGS: Investing | U.S. Equity | Transportation

The EV market is nowhere near saturation yet. I believe we'll have some additional expansion before we begin to see takeovers.