This commentary originally appeared on Real Money Pro at 08:30 on April 11. Click here to learn about this dynamic market information service for active traders.

It was a public relations nightmare. A video of a man being forcibly removed from a United Airlines flight spread like wildfire across social media yesterday. United apologized for having to "re-accommodate" the passenger, who was dragged away, limp and bloodied, as horrified passengers looked on. Let's just say it didn't look good.

Worse, this man wasn't a terrorist, or even a particularly bothersome passenger. He'd merely purchased a ticket on an overbooked flight. United sold the ticket to him, allowed him to board, and then asked him to leave. When he refused, a wild scene ensued. The situation was handled poorly, to say the least.

You'd think shares of United Continental (UAL) would fall on this news; instead, the stock popped to a one-month high yesterday. United broke out of a cup-with-handle pattern (semicircles), and traded above its 50-day moving average (blue) for the first time in a month before backsliding late in the day. UAL trades well above its 200-day moving average (red), currently located near $61. That's an impressive performance for a stock under duress. 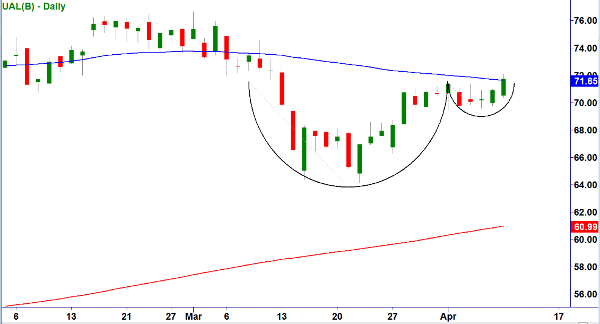 I've learned to pay attention to stocks that plow right through bad news, as it usually means good news is on its way. Sure enough, yesterday United raised its forecast for flight capacity; the company now expects capacity to grow by 2.6%, vs. its prior projection of a 1-to-2% increase. The stock was lower in pre-market trading this morning, but that could represent an opportunity. Here's why:

Southwest Airlines (LUV) might be forming a bearish head and shoulders pattern. Spirit Airlines (SAVE) and Hawaiian Holdings (HA) have been trending lower since December. Even Alaska Air Group (ALK) , perhaps the strongest name in the sector over the past four years, appears weak when compared to United.

What is the market telling us about United? This is a serious situation, made worse by the fact that the company's apology seemed to excuse its behavior. The damage from the "re-accommodation" controversy can be repaired, but first the company needs to reassure the public that what they saw in that video in no way represents company policy. United needs to work hard, right now, to regain the public's trust and save its reputation.

Get an email alert each time I write an article for Real Money. Click the "+Follow" next to my byline to this article.
TAGS: Investing | U.S. Equity | Transportation | Markets | How-to