"Headlines, in a way, are what mislead you because bad news is a headline, and gradual improvement is not"

Equity markets rallied hard last Thursday. That night the president unveiled his ideas on expanding tariffs on Chinese imports. Friday morning, markets opened deep in the hole, and kept on going. Treasury Secretary Mnuchin spoke out, and markets got even worse ... until around 3 p.m. ET. Markets then promptly rallied sharply into the closing bell. Traders waited on Sunday evening. All expected that China might drop a couple of sharp words on the Sunday night futures markets, in order to amplify their intent. Nope. Not to be. Equities then roared into the new week. Huzzah, Monday was a "risk on" session... until around 2 p.m. ET.

The worm turned yet again. Stocks sold off hard into the closing bell. The catalyst for this particular bout of selling? The president's personal lawyer had just seen his office, home and a hotel room raided by the FBI. Uh oh.

Wait !! There's more. Overnight, in a much anticipated address, China's President Xi, while not mentioning the United States or President Trump, announced that plans are now under way to increase the economic liberalization of China. Xi struck a conciliatory tone, referencing greater foreign access to his nation's financial, and manufacturing sectors, while reducing tariffs on imported vehicles. Is now the time when China finally embraces the protection of intellectual property rights? That is, after all, the core of the quarrel at hand. Everyone back in the pool!! Equity index futures once again took off, this time to the upside.

It would appear in 2018, that long gone are what traders used to consider to be either "up days" or "down days." The terms "risk on" and "risk off" are used to describe moves in the modern era, not days or even more ridiculously... weeks. Headline risk comes hand in hand with a volatile administration in Washington, that regularly rattles the cages of some investors. Now, throw in, ever-changing responses from the Chinese government, pervasive geo-political risk that is currently centered on Syria, and the circus that seems to be landing squarely on Facebook's (FB) Mark Zuckerberg. Traders are left wondering just what matters right now.

A great deal of the current state of volatility obviously has to do with the withdrawal of monetary accommodation. This may not be the catalyst for volatility, but this is the environmental change that no longer subdues market volatility. As the Fed tries to normalize, there is more and more reason to watch headlines. It's not just us humans watching. Not even close. Automated trading has easily taken the lead in these markets, and will pick up on keywords, making the 24-hour news cycle the dealer of speed, and the catalyst of over-reaction.

I do not see any way to put this particular monster back inside the box. Oh, Pandora. A stabilizing force could... should be earnings. Wall Street looks for another quarter of double-digit earnings expansion. The belief is that we will see more revenue growth, but more importantly thanks to the implemented tax cuts on top of a regime that supports deregulation, it will be margin expansion that investors watch closely.

I wish that I could tell you that earnings will matter more so than swirling headlines. The fact is that earnings will matter on a case by case, or maybe even a sector by sector basis. That will come with the power to improve investor sentiment (or hurt it), but those headlines will continue to cause the seismic shifts (rotations) that we have seen in market behavior.

How to deal with this? One must, in my opinion, anchor one's portfolio. One must also learn how to hedge through the options market, as well as through diversification. One must also become more comfortable with a heightened level of intra-day volatility. There is no way around that one, other than exiting the marketplace. In other words, if the suddenly larger swings in your P/L ratio bother you, then you are playing this game deeper than is your tolerance for risk.

Fortunately, this a problem easily handled. Getting this condition under control is as easy as cutting back on one's open positions even if this is not the right price. At what price I ask, the quality of life? Precious, I would think.

Dawn of The Season

Once upon a time, I used to fancy myself a trader that focused on the financials. As a professional, I morphed into other arenas by necessity. The tech space became my darling, After that, it became aerospace and defense that caught my fancy. However, a piece of my heart still looks back at the banks, and sees them in the way an old beau might look at a picture of someone they used to know.

That said, I never completely abandoned the space. I remain long Citigroup (C) , I am flat KeyCorp (KEY) , having managed to maximize that trade earlier this year. Recently, your pal even reloaded his Goldman Sachs (GS) long after having trimmed that position appropriately. That, friends, is based on my belief that volatility will allow this legendary firm to reclaim its reputation. This one, I'll watch with great anticipation. They report on Tuesday, April 17. My trigger finger itches now.

What if a trader wanted to "play" this Friday's earnings? I've already told you that I am long Citi. That long position is there for strategic reasons, namely the firm's pledge to return $20 billion to shareholders this year. Nothing playful about that. Know who I haven't held in a long time, and kind of missed the boat on? JPMorgan Chase (JPM) , that's who. Hmm.

One can see that the name currently trades about two bucks below its 50-day simple moving average, and below where it has traded for most of the year. Technically, the stock has fallen below trend and has seen resistance at the lower bound of its broken Pitchfork model. Relative Strength is mediocre. The daily MACD (moving average convergence divergence) looks poised for some short-term positivity, but Money Flow remains dreadful. 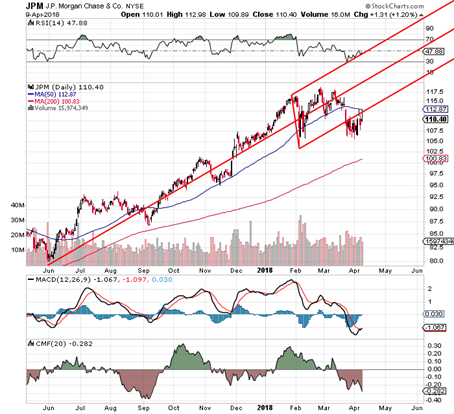 Obviously, markets are volatile, and these last sales, or strike prices may have to be adjusted once the bell rings, but to simplify, I am using Monday's closing prices, and we'll use minimal lots for the example.

Of course, to avoid that scenario, the trader might also buy back the options positions as time premium withers.

The beauty of this trade is that the stock price would have to drop by nearly ten bucks for the trader to actually net lose money. Even wrong, the trader would still have eight months to be right, all the while the short options positions, in theory, would not lose any value over time other than the difference between the strike prices and the equity last sale. Food for thought.