American steel producer Nucor  (NUE) has been in a bull phase since early 2016 and the rally is likely to carry further in the months ahead.

Let's check the charts and indicators for clues to see if the latest consolidation will resolve itself on the upside.

In this daily chart of NUE going back the past twelve months, below, we can see that rallies in the first half of 2016 and in November have been followed by multi-month corrections. The moving averages are giving us mixed signals at the moment, with NUE testing the flat 50-day moving average line from below, but comfortably above the rising 200-day moving average line. Notice the successful tests of the 200-day average line in September and October.

The daily On-Balance-Volume (OBV) line has been positive for much of the past year, but more importantly, the OBV line has turned up since early February -- signaling increased buying enthusiasm, and perhaps foreshadowing a breakout over $66. The Moving Average Convergence Divergence (MACD) oscillator is poised for a bullish crossover below the zero line, which is a cover-shorts buy signal (the way I apply this indicator).

In this weekly chart of NUE, above, we can see that prices are above the rising 40-week moving average line. The weekly OBV line has been in a strong up-move since the beginning of 2016 and suggests strong accumulation. The MACD oscillator on this timeframe has been above the zero line since last April -- and could be narrowing towards a fresh go-long signal. 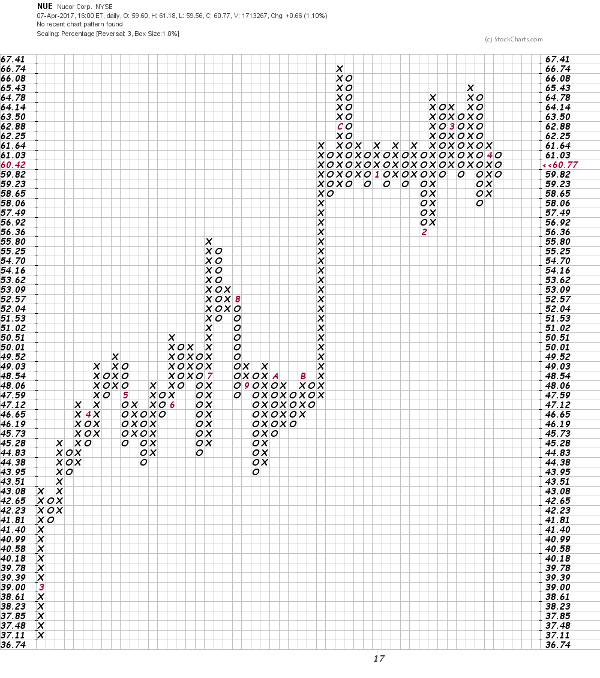 In this Point and Figure chart of NUE, above, we can see the most-current consolidation pattern. Prices are in a down column (Os) but a rally to $62.25 improves the short-term picture and a rally to $66.08 is a more important breakout.

Bottom line: Traders could probe the long side of NUE here and on strength above $62 and $64, risking a close below $56 (the intersection of the rising 200-day average line).