Verizon Communications Inc. (VZ) is another telecommunications name highlighted by Jim Cramer as not to be affected by the daily swings of U.S.-Chinese trade tension. Someone has been buying VZ shares on weakness and higher prices are likely to be seen in the weeks ahead. Let's make a proper review of the charts and indicators to see where we might get long VZ.

In this daily bar chart of VZ, below, a broad sideways to higher trading pattern the past 12 months. Higher lows can be seen in July, November and February. Higher highs are visible from June to January. A rally above the January peak is needed to restore or refresh the uptrend.

VZ is below the declining 50-day moving average line, above, and just slightly below the flattening 200-day line. The daily On-Balance-Volume (OBV) line shows a positive pattern from the middle of November. Prices go up sharply in November and December and the OBV line rises. The line continues to improve even as prices decline from late January. A rising OBV line is a sign of aggressive buying and can foreshadow a rally.

In this weekly bar chart of VZ, below, we can see a three-year sideways trading range bounded by $43-$42 on the downside and the $56 area on the topside. More recently we can see that prices are just below the rising 40-week moving average line. A small rally could put prices above this indicator. The weekly OBV line shows a decline the past three months which is different from the daily pattern. The weekly MACD oscillator is in a decline to test the zero line but the two moving averages that comprise this indicator have begun to narrow which is the first step to a possible crossover.

This Point and Figure chart of VZ is interesting in that it goes back to 2008. The long-term pattern is bullish even though the current column is bearish (O's). A rally to $55 would refresh the uptrend and open the way for a possible $76 price target. 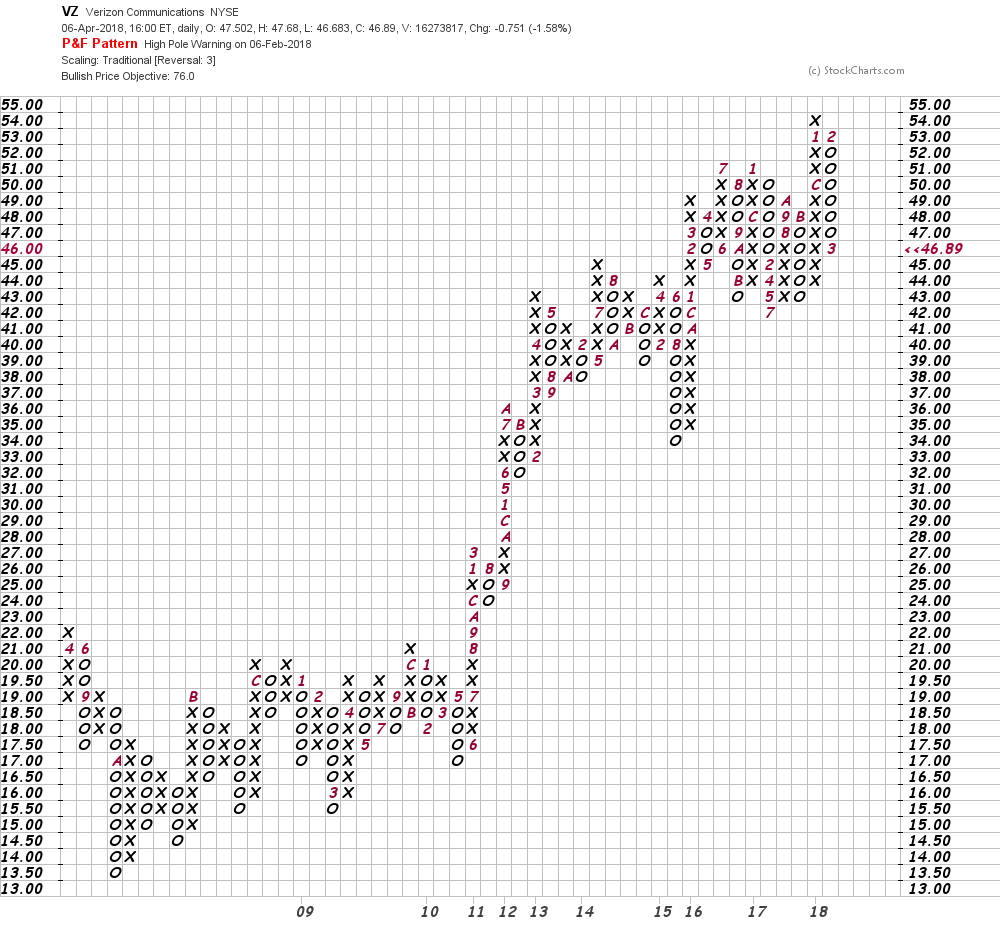 Bottom line: Aggressive traders and traders who want to be defensive could consider going long VZ on strength above $49.50 risking below $46.

Get an email alert each time I write an article for Real Money. Click the "+Follow" next to my byline to this article.
TAGS: Investing | U.S. Equity | Telecom Services | China | Markets | How-to | Politics

The technical signals of the video communications company indicate sellers of its stock have been more aggressive than buyers.

As this name is set to report earnings, the charts look bearish.

Roku Plunges and We Have a New Price Target

T-Mobile Looks Pretty in Pink After 'Beat and Raise' Quarter

We have new price targets for this move up.

A Close Look at Apple Ahead of This Week's Key Earnings

Let's drill down on the charts and see what they tell us.