Last year the stock price of CenturyLink, Inc. (CTL) was slashed in half from over $27 in June to near $13 by the end of November. Not pretty. The volume of trading became heavy in October, November and early December, suggesting a fair amount of capitulation or "throwing in the towel" selling.

Prices have stabilized from that November low and could improve further in the weeks ahead. Let's see what all the charts and indicators point to.

In this daily bar chart of CTL, below, we can see the bid decline and the subsequent sideways pattern since late December. Prices have crossed above and below the 50-day moving average line and the slope has shifted a couple of times. CTL is below the declining 200-day line but a rally to $19 would change that quickly.

The daily On-Balance-Volume (OBV) line declined from June to late November but it has improved since then. A move above the December high will improve the picture.

The trend-following Moving Average Convergence Divergence (MACD) oscillator crossed to the upside last week for a cover shorts buy signal. A move above the zero line would be an outright go long signal.

In this weekly bar chart of CTL, below, we can see a long decline for the shares of CTL, but that trend looks to be over. Prices are below the declining 40-week moving average line but a strong close above $18 would break this moving average.

The weekly OBV line shows a low in November and then a four-month improvement and this could be pivotal. The weekly MACD oscillator shows a cover shorts buy signal in December and the indicators is making its way back to the zero line of a possible outright go long signal.

In this Point and Figure chart of CTL, below, we can see a lot of price history. Prices are still in a multi-year downtrend but a $25 price target is seen. A rally to $19.00 would be bullish. 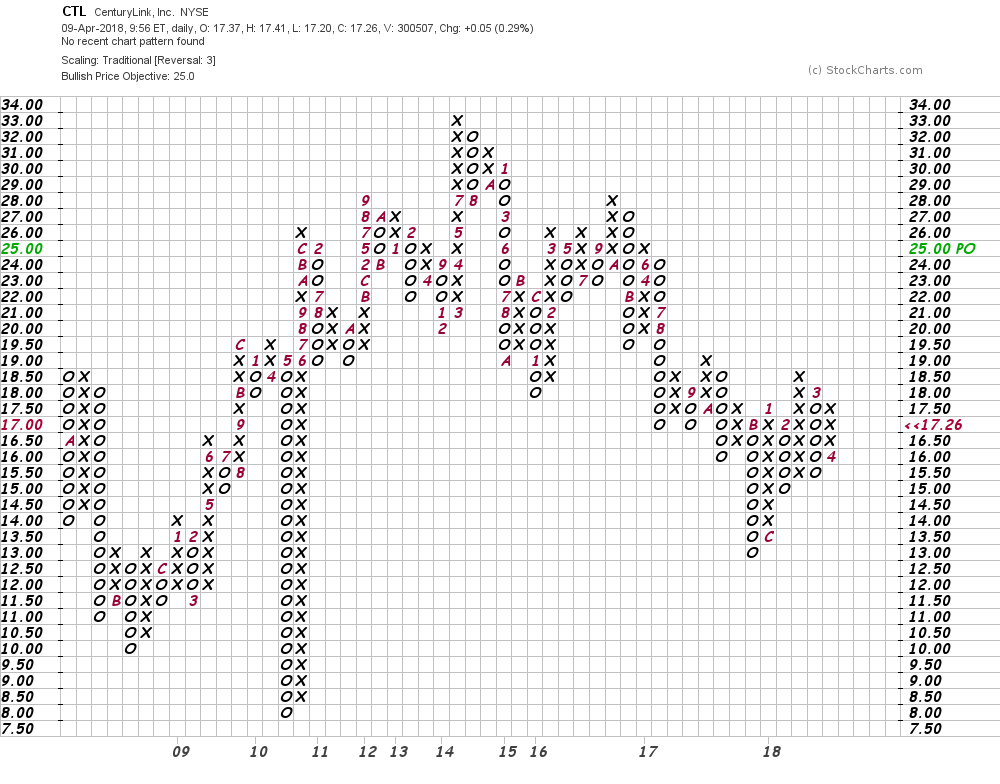 Bottom line: CTL might continue to trade sideways in a $15-$19 range but an upside breakout seems to be a when and not an if situation. Aggressive traders could go long CTL above $19 risking to $15 and looking for gains to the $24-$26 area.