(This commentary originally appeared on Real Money Pro on Friday. Click here to learn about this dynamic market information service for active traders.)

I love a good party, and the post-election rally has been a great one. Stocks, especially the so-called "Trump stocks", have had an incredible run. However, the shine is coming off some of those names, as doubt creeps in about which of the President's policies and plans will make it through Congress. According to the charts, it may be time to take some money off the table on select Trump stocks.

For example, shares of U.S. Steel (X) doubled in just over a month, opening at $17.20 on Nov. 2 and closing at $37.49 on Dec. 7. A forgotten name for years, U.S. Steel became the ultimate Trump stock: an infrastructure play that stood to benefit greatly from potential tariffs on imported steel.

However, U.S. Steel has done little lately; in fact, the stock is actually trading lower today than it was on Dec. 7. During the intervening months, the stock has formed a topping pattern. Within that pattern, a series of lower highs (LH) and lower lows (LL) have emerged. 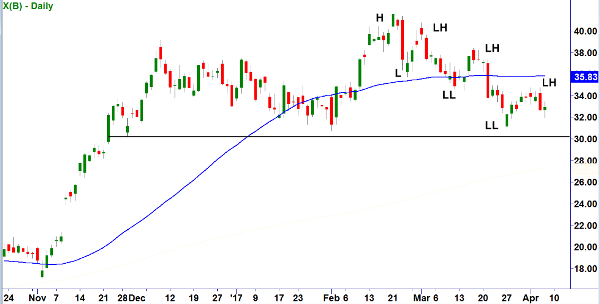 Notice also that the stock is now trading below its 50-day moving average (blue). If U.S. Steel closes beneath the Nov. 29 low of $30.24 (black line), I'd consider closing some or all of the position, as more sellers could be drawn into the trade.

Another Trump stock that has stalled is Cliffs Natural Resources (CLF) . This mining and natural resource company managed to double in a short time, opening the month of November at $5.65 and printing an intraday high of $12.37 by mid-February.

However, Cliffs has now formed a topping pattern that looks similar to that of U.S. Steel. Like that stock, Cliffs Natural Resources is trading below its 50-day moving average (blue) and has formed a series of lower highs (LH) and lower lows (LL). A close below $8 could send this stock over the edge. 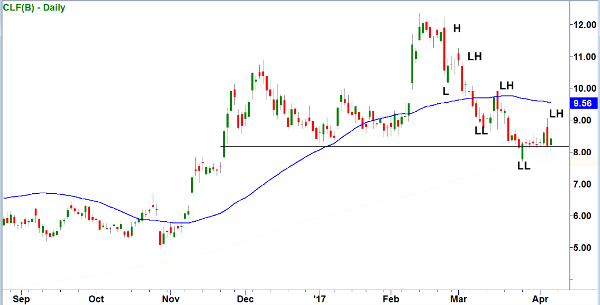 This doesn't necessarily mean that the party is over, as there are still plenty of Trump stocks that have attractive charts. Defense names like Lockheed Martin (LMT) and Boeing (BA) still look good, which comes as no surprise as Trump's proposed budget is heavy on defense spending.

Some banks, like Citigroup (C) , still have attractive charts. Again, this comes as no surprise as Trump frequently mentions his intention to overhaul Dodd-Frank and other financial regulations.

However, some of the names that saw the quickest gains may have gotten ahead of themselves. They could be due for a correction.

(What will move markets this quarter and how should investors position themselves ahead of time? Jim Cramer sat down with four of TheStreet's top columnists recently to get their views. Click here to listen to his latest Trading Strategies roundtable with them and read their advice for stocks, bonds, forex and gold.)
Get an email alert each time I write an article for Real Money. Click the "+Follow" next to my byline to this article.
TAGS: Investing | U.S. Equity | Financial Services | Industrials | Markets | Politics | Stocks

As the steel maker makes an upside breakout -- here's where traders should look to buy the dip.

Here's why the institutional stewards of capital who are taking back control of the market are salivating over a dirty old iron company.

I'm Looking to Buy Manitowoc on a Pullback

Here's my strategy on MTW shares.