Energy Transfer Partners  (ETP) looks like it will be stuck in neutral for the intermediate term.

In this daily chart of ETP going back 12 months, above, we can see a sideways market. ETP reached a peak in early August and twin lows in November and December and prices have meandered sideways between those to extremes. Prices have crossed above and below the 50-day moving average line a few times and ETP is currently below the declining 50-day line. ETP is also below the declining 200-day moving average. The On-Balance-Volume (OBV) line moved lower from August to early December, telling us that sellers were more aggressive with more volume of shares being traded on down days. The OBV line has only made a modest recovery from the December low, so the upside on ETP looks limited. In the bottom panel is the Moving Average Convergence Divergence (MACD) oscillator, which just crossed for a cover-shorts buy signal.

In this weekly chart of ETP, above, we can see a similar neutral trend as we saw in the daily chart. Prices are crossing above and below the 40-week moving average line. The OBV line on this timeframe has been neutral since early 2016 and the MACD oscillator has "flat lined" on the zero line, suggesting there is no trend strength. 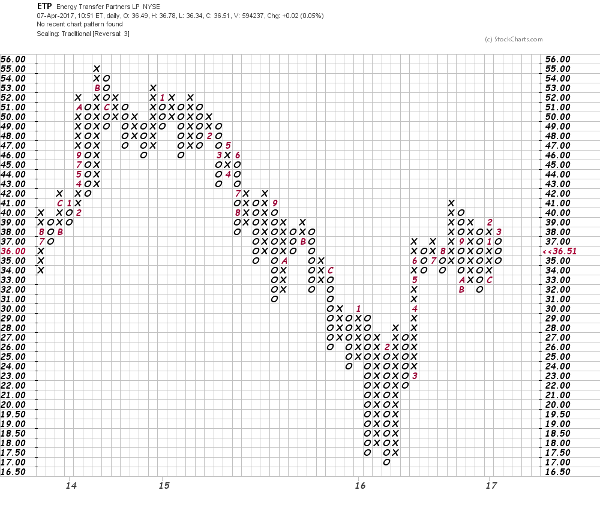 In this Point and Figure chart of ETP, above, we can see the sideways price action, which looks pretty balanced to me. Unless the balance shifts, I would anticipate more sideways price (in)action from ETP.