The trading in Accenture (ACN) in the past year has been choppy -- sharp rallies followed by deep retracements or pullbacks. Prices are slightly higher from where they were a year ago but it hasn't been easy sitting through the up-and-down swings. We do not currently see major sell signals, but heavier volume last month as prices declined suggests that we should pay closer attention.

In this updated daily bar chart, below, we can see that ACN failed for the third time to break above the $124-$126 area. The first attempt was in late September, the second was in December and the latest was this past month. Different from the other declines, prices gaped lower twice.

ACN is below the still rising 50-day moving average line but holding/testing the 200-day moving average line. The 200-day average line was tested in September and January/February and managed to rally back. The daily On-Balance-Volume (OBV) line has been going up the past year telling us that buyers of ACN have been more aggressive. In the lower panel is the 12-day momentum study which does not show that the downside move is slowing.

In this weekly chart, below, we can see how ACN has tested the rising 40-week moving average line several times in the past three years. Prices are sitting right on that moving average now. The weekly OBV line has been rising since late 2014 and is not showing any signs of more aggressive selling. In the lower panel is the trend-following Moving Average Convergence Divergence (MACD) oscillator, which has been above the zero line for much of the last three years but is currently giving a take profits sell signal.

In this Point and Figure chart of ACN, below, we look at just the pure price movement with no indicators. An uptrend is clearly visible. If prices moved up to a new high of $128 it would open up the possibility of a potential upside price target around $150. The chart also shows that $116/$114 is support. 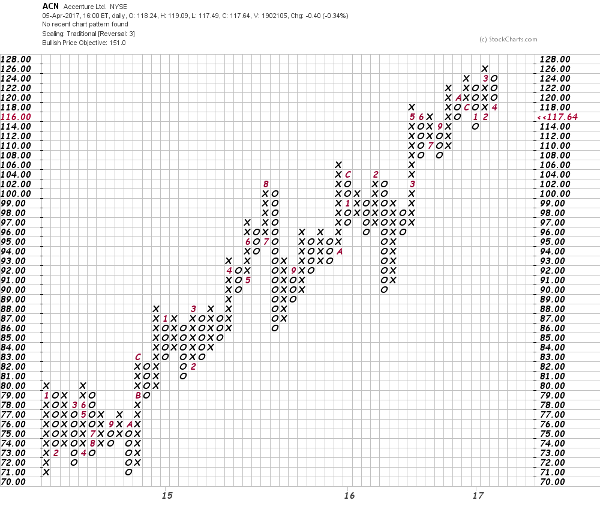 Strategy: The increased volume as ACN declined in recent weeks is a warning shot. I do not currently see enough weakness in the indicators to say that ACN should be sold, but I will say we should keep closer tabs on things. A close below $112 would be bearish and tip the scales in favor of the bears.