Ford Motor Co. (F) was reviewed almost one month ago, and I summarized the charts this way: "The price of F has been flirting with new lows recently and without strong signals that buyers are being aggressive. I would remain defensive on Ford." F has been stuck in a one dollar range the past month but buying has developed. Let's see what has changed on the charts.

In this daily bar chart of F, below, we can see that prices are above the 50-day moving average line but the line is still pointed down with a negative slope. The daily On-Balance-Volume (OBV) line has risen modestly the past two months and shows that buying interest in F has increased. The daily Moving Average Convergence Divergence (MACD) oscillator is up to the zero line and could give us an outright buy signal soon.

In this weekly bar chart of F, below, we can see that prices are below the still bearish 40-week moving average line. The weekly OBV line has inched up the past two months but the MACD oscillator is still bearish. It has narrowed recently but it is still a ways from a cover shorts buy signal.

In this Point and Figure chart, below, we can see that for a number of years F has been in a sideways pattern. A trade up to $13.50 would be positive while a decline to $10.00 could weaken the picture. 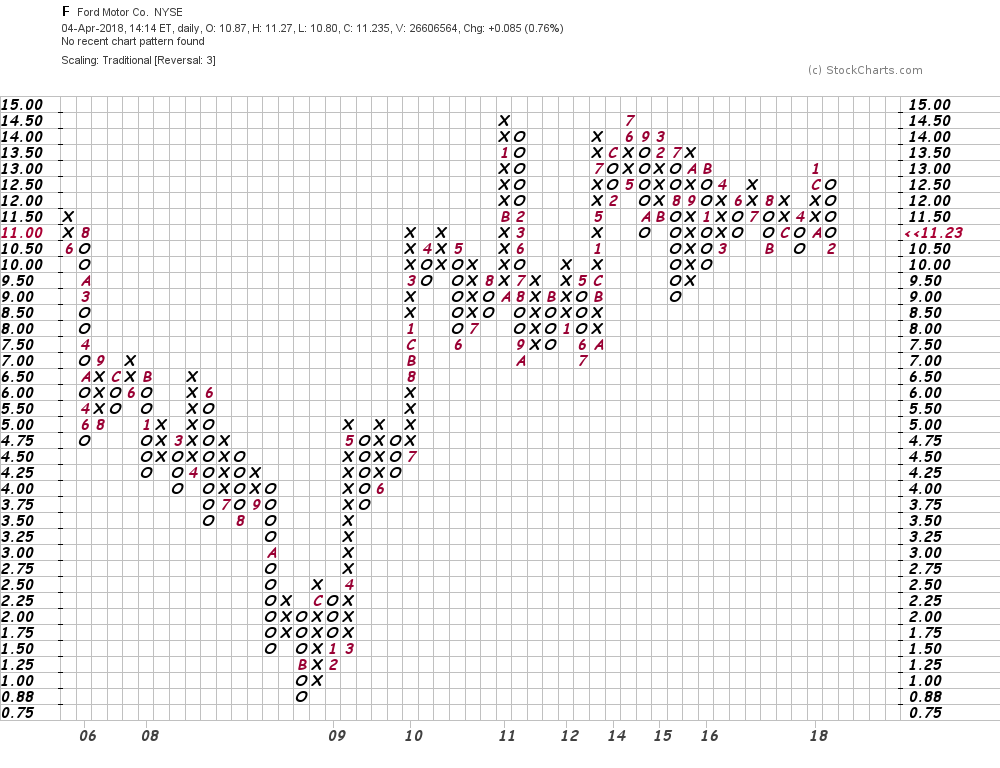 Bottom line: F has shown some improvement over the past two months but it doesn't look like a sustained rise is ready to begin.

Get an email alert each time I write an article for Real Money. Click the "+Follow" next to my byline to this article.
TAGS: Investing | U.S. Equity | Consumer Discretionary | China | Markets | How-to | Politics

Investors Could Clean Up With Procter & Gamble, According to These Charts

Poor earnings could drain some of the momentum, but otherwise a brush with $140 looks clearly possible.