The PHLX Semiconductor Sector Index ($SOX), popularly known as the SOX, was one of the pillars of the bull market. While the S&P 500 peaked on Jan. 26, the SOX continued to climb, reaching its pinnacle on March 12. Every market has leaders and laggards, and the semiconductors have consistently acted as leaders for the past several years.

Looking at the weekly chart of the $SOX, we can see that major support lies at 1205 (black dotted line). That support hasn't been broken yet, but the semiconductor index is steaming right toward it.

Note that the index recently made a series of higher highs (green line), but at the same time, its MACD (moving average convergence divergence) indicator formed a series of lower highs (red line). This is a classic example of bearish MACD divergence; the expectation is that the price will now follow the direction of the indicator. This means that the price should break lower. Therefore, a break of support at 1205 is likely. 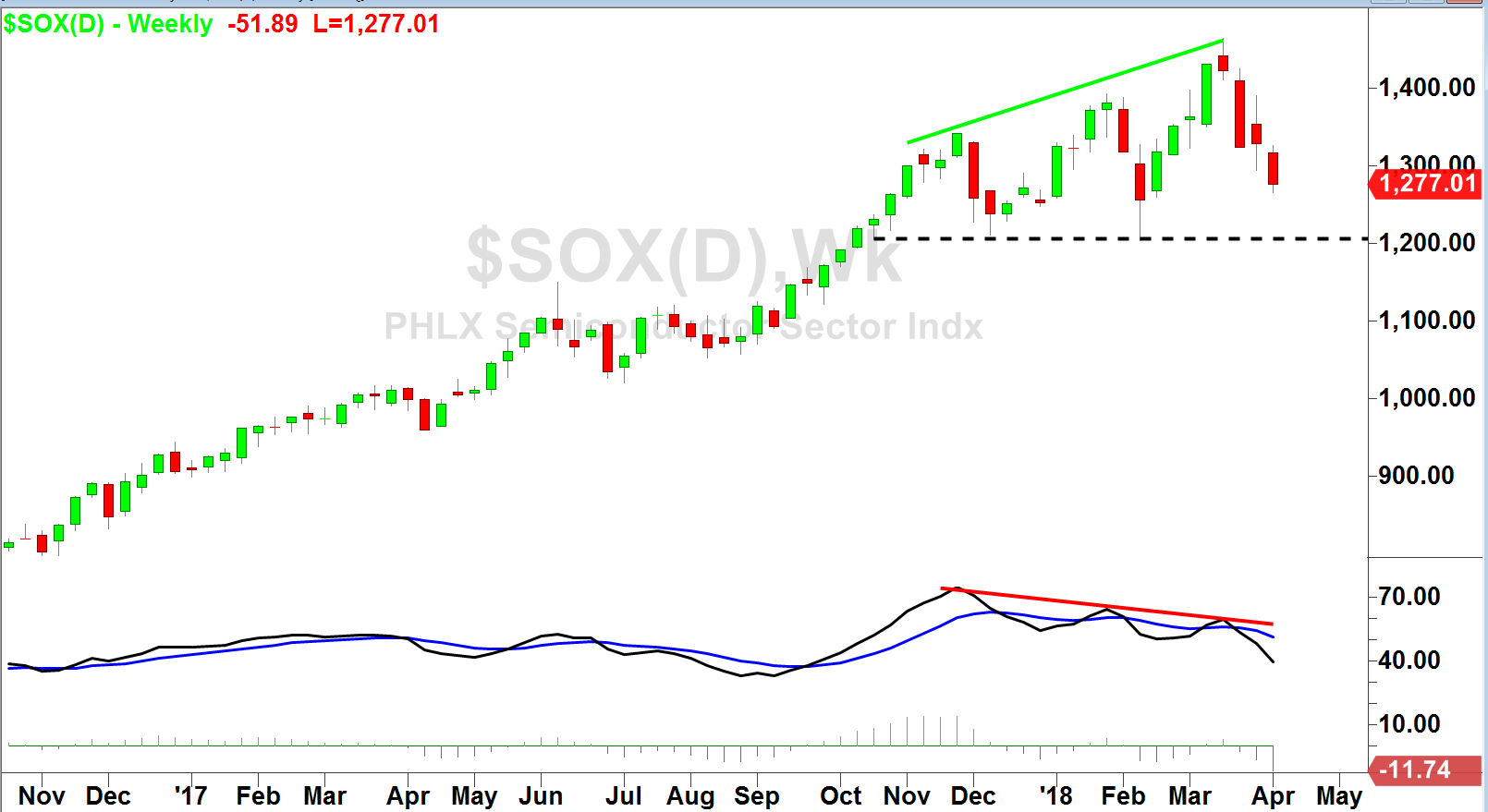 While the SOX hasn't broken down just yet, some of the names within that index are right on the edge. For example, Advanced Micro Devices (AMD) closed at its lowest price since 2016 Monday. In doing so, that stock broke through major support at $9.62 (dotted line).

Bearish MACD divergence is evident on AMD's weekly chart. The stock's MACD indicator has been sloping downward for the past year, and now the stock is finally following its path lower. 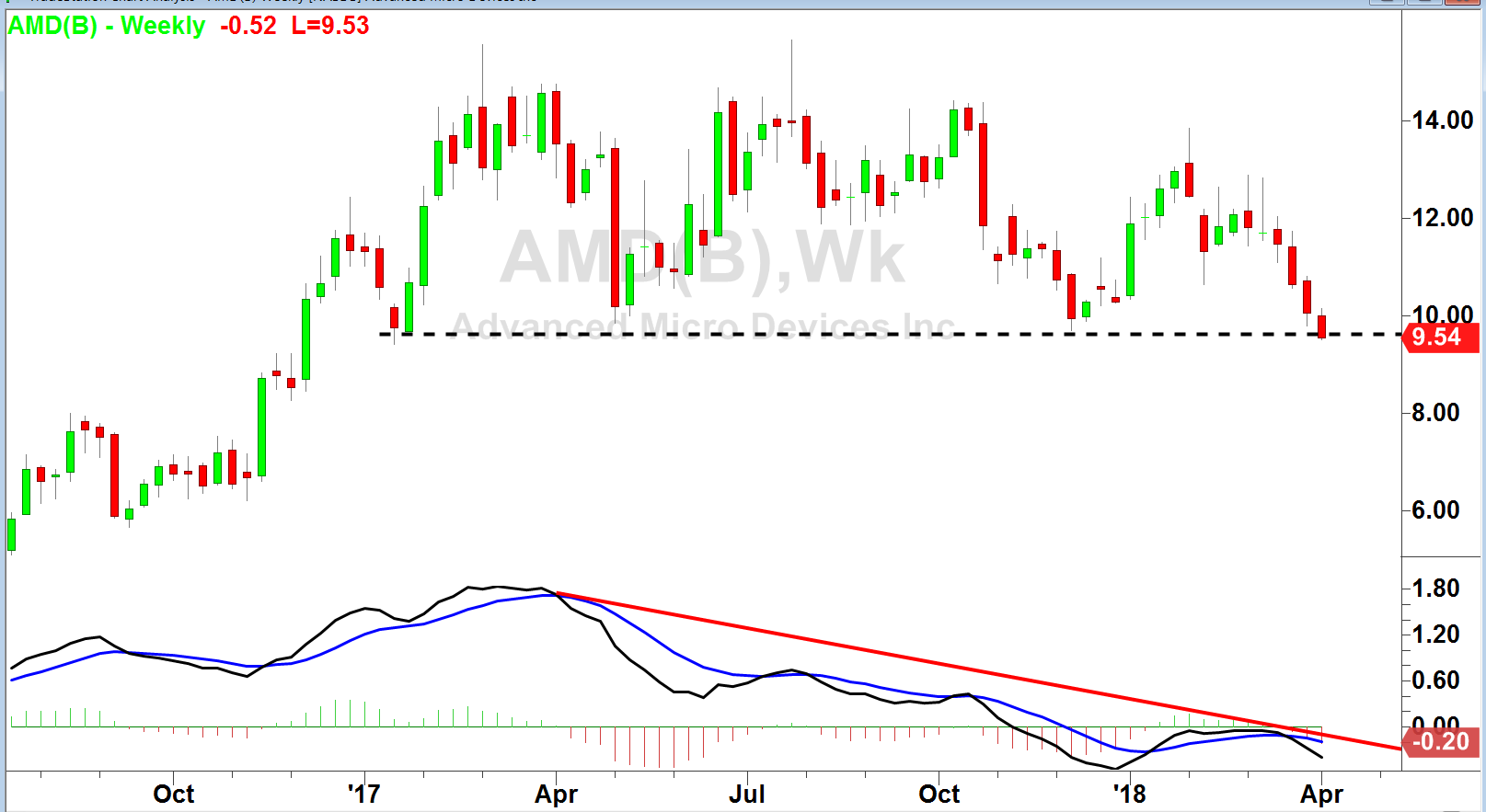 Another chart in peril is that of Integrated Device Technology (IDTI) . This stock has formed a triple-top pattern (semicircles) over the past six months. The lowest weekly close over that time period is $28.24. A weekly close below that figure opens the door to $24 (measured move). However, true support for IDTI lies at $23, which was the sight of numerous bounces during the first half of last year (black dotted line). 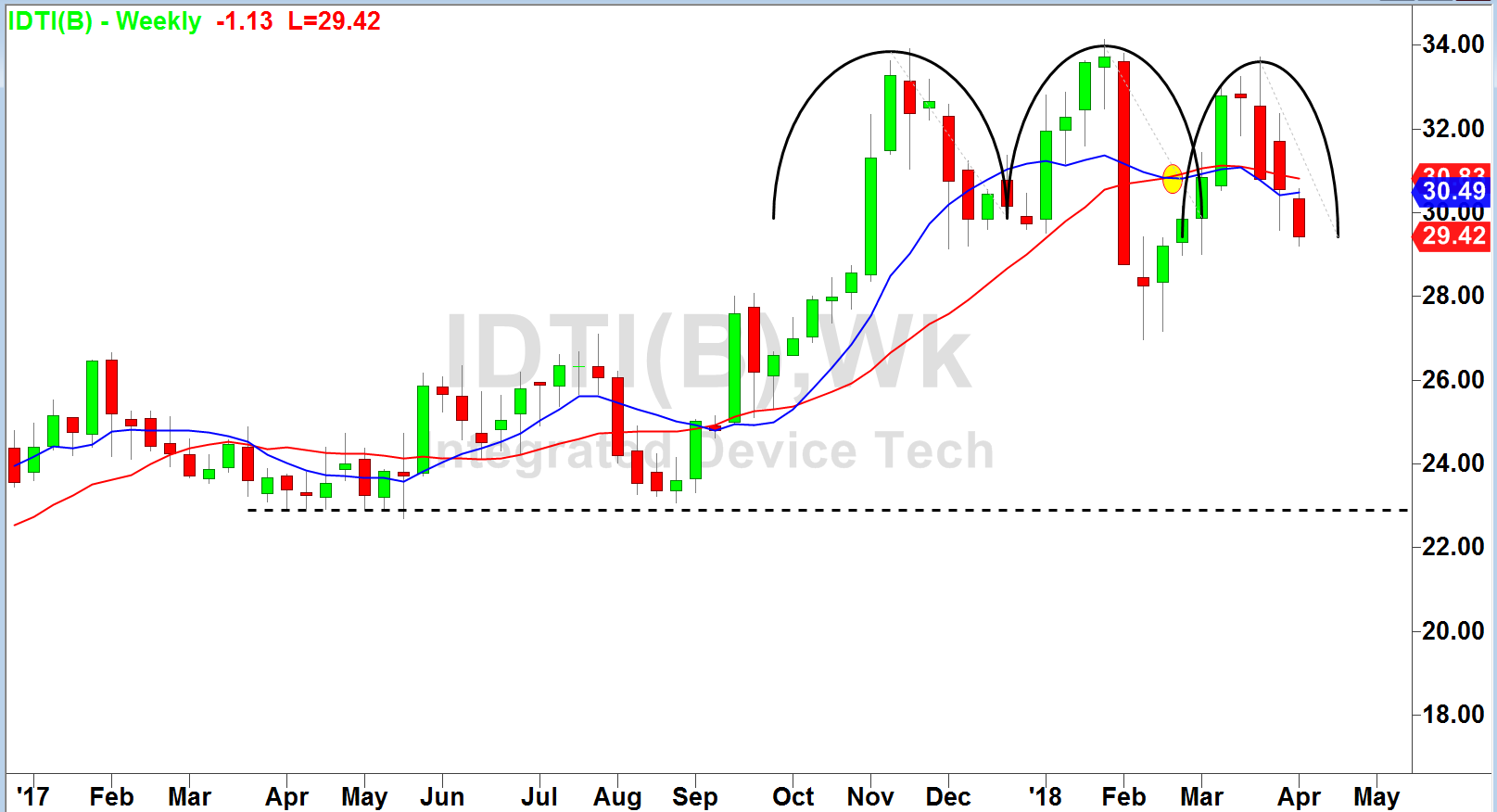 Because the semis have been big winners over the past few years, some investors are sitting on large profits in this sector. The charts are telling us that the time has come to ring the register and take semiconductor profits off the table.

This commentary originally appeared on our sister site Real Money Pro. Click here to learn about this dynamic market information service for active traders and to receive daily columns from Ed Ponsi, Paul Price, Bret Jensen and others.

Get an email alert each time I write an article for Real Money. Click the "+Follow" next to my byline to this article.
TAGS: Investing | U.S. Equity | Technology | Markets | How-to | Stocks Under $10