"Bravery is the capacity to perform properly even when scared half to death." -- U.S. World War II Gen. Omar N. Bradley

We've come to the point where stocks are seeing the repricing of forward earnings multiples. Both investor sentiment and momentum have turned from friend to enemy thanks to a number of forces negatively impacting price discovery.

Some might blame trade issues with China, but markets already expected the anti-U.S. tariffs that Beijing announced Monday. Is the U.S. trade relationship with China fair to America? Of course not, but correcting it will have a short- to medium-term negative impact on stocks (and on the U.S. consumer).

Not surprisingly, an adjustment to forward P/E ratios has started in tech -- a space where there was more room to the downside, and which has the deepest and most robust Chinese-revenue exposure.

But wait, there's more. Markets must also deal with a clown car full of tech CEOs. Apple (AAPL) is trying to differentiate itself from Facebook (FB) , while President Trump is in a public war with CEO Jeff Bezos of Amazon (AMZN) .

And perhaps most incredibly of all, one completely unbelievable April Fool's "joke" of a tweet by CEO Elon Musk of Tesla (TSLA) caused his own investors to lose some serious capital. Nice job there, Slick.

Short-term LIBOR has already gone against the marketplace. Do we know how this shakes out in the equity space in real time?

No, and that certainly increases uncertainty. Add to that a Federal Reserve that's already draining liquidity through balance-sheet reduction while simultaneously raising rates and we're staring at a recipe for a major policy error.

Just slow down on the rate hikes you say? Seems easy, but inflationary pressures are threatening their own release from the depths of Hades.

This is why the Fed will remain on course. Fed Chairman Jay Powell understands that all that the quantitative easing and artificially low interest rates of the past merely delayed some necessary pain.

The piper has not yet been paid, but is patient. So, U.S. interest rates will be higher in the second half whether warranted or not.

The Importance of Beating Earnings

First-quarter earnings season begins next week, with expectations for the S&P 500 just as dandy as they were for the fourth quarter. S&P 500 companies solidly beat analysts' earnings-per-share expectations in 2017's fourth period, with aggregate 13.5% year-over-year earnings growth and 8.5% average revenue increases.

Analysts predict aggregate S&P 500 earnings will grow an even-steeper 15.9% in the first quarter, with revenues forecast to add 7.3%. After all, this will be the first quarter to display actual results from the Trump administration's tax reform.

Market watchers expect energy to lead the way higher, but banks will report first. A pop in profitability there will set the tone -- and perhaps slow the market's bleeding (or at least the recent volatility).

The bulls have other friends here. For instance, it would appear that oil has stabilized in the low $6's per barrel.

On top of that, the Atlanta Fed's GDPNow model currently has first-quarter U.S. economic growth running at 2.8%, up from 1.8% only a couple of weeks ago. Even 1.8% would have been a strong headline number for a first quarter given what the U.S. economy has been through over recent years.

How I'm Playing This

The bottom line is that uncertainty will certainly reign for the time being, and the only reasonable way for stocks to react is to reduce their forward-looking multiples.

What this means is that expected timelines for certain events based on historical patterns are useless. It also means that markets are likely going to overshoot in both directions before we get where we're going. The machines will most likely increase the very market inefficiencies that they were created to decrease.

My response to all of this has been to reduce my stock-market exposure and just try to figure out where to hide. Regular readers know I went to an increased cash level in January, and I'm even higher in cash now (36.9%).

However, cash doesn't grow our portfolios; it just keeps them from eroding in nominal terms. So, while I've reduced my exposure to some of my favorite tech names, I've repurchased others at a discount.

I also keep searching for new ways to tackle this changing environment. One place I'm going is to Vietnam, via the VanEck Vectors Vietnam ETF (VNM) .

Vietnam isn't even considered an emerging market; MSCI classifies it as a "frontier" one.

However, expectations for the country's 2018 economic growth run from 5% to 6%. And if U.S.-Chinese imports and exports are disrupted or at least slowed down due to a trade war, who's likely to benefit?

If you watch the news, you've seen the U.S. Navy making port calls in the Vietnamese port of Da Nang, a major America military base during the Vietnam War. You've also seen President Trump's big defense budget and China's response (an 8% increase over last year).

So, not only is Vietnam a place where U.S. manufacturers could turn for goods, but it's also a potential military ally -- not to mention a member of the original Trans-Pacific Partnership trade agreement that America never ratified.

I'm playing the country via VNM, which owns firms either based in Vietnam or that derive at least 50% of their sales from the country. The fund is diversified, with its largest exposure in staples, financials and real estate.

Let's look at its chart: 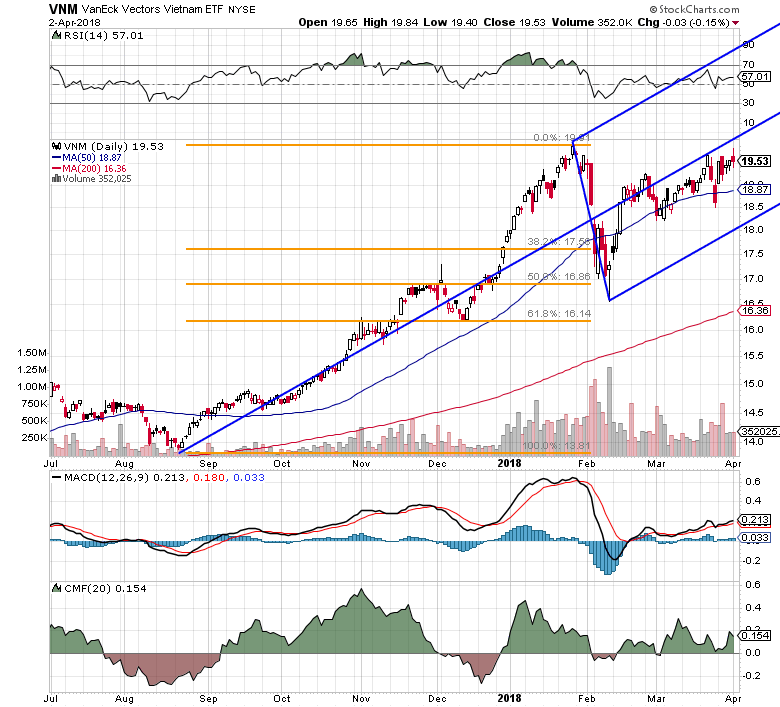 This chart displays the sharp contraction that was felt across many markets in early January/February. However, it shows none of the recent volatility associated with any potential U.S.-Chinese trade war, nor with the U.S. "tech wreck" in general.

Rather, VNM still finds support at the 50-day simply moving average (marked "MA (50)" above). Its Relative Strength Index (marked "RSI"), daily Moving Average Convergence Divergence oscillator ("MACD") and Chaikin Money Flow ("CMF") all look to be in good shape, too. Additionally, VNM seems to have responded well to what looked to be a "Buy" signal coming out of that cup-and-handle pattern above.

What now? Well, the Pitchfork in the chart above clearly stakes out rising resistance -- but that's a whole lot better than the "kidney punch" that you're getting everywhere else.

Add it all up and I've recently gotten into this name. VNM might not get you rich, but it might preserve your capital while you wait for better days on Wall Street. And heck, the fund might even toss you a little capital appreciation in the process.

Retirement Is Coming. It's never too early -- or too late -- to plan, save and invest for the retirement you want and deserve. Let TheStreet's new premium subscription newsletter,Retirement Daily, give you the insider's edge on how to maximize and protect your most important investment, your retirement savings. Learn more about Retirement Daily and get a free trial subscription.