Broadcom (AVGO) is testing/breaking key support. AVGO broke down in late January and early February but then rallied back smartly in March. In the past couple of weeks AVGO has reversed directions and is now retesting its early February lows. A close below this key chart point is not a healthy sign.

In this daily bar chart of AVGO, below, we can see that after a large ten-month sideways trading range that AVGO is now poised to break to the downside. The 50-day moving average line crossed below the 200-day line in the middle of March for what is commonly called a dead cross. This bearish technical signal is typically late and we can see that prices peaked back in late November. The 200-day average line is rolling over and that adds to the bearish signals. The daily On-Balance-Volume (OBV) line has been very weak the last month, continuing the pattern of the last three months. The daily MACD oscillator is below the zero line now for an outright sell signal.

In this weekly bar chart of AVGO, below, we can see that prices are now below the flattening 40-week moving average line. The weekly OBV line has been "jagged" but did turn lower in March. The weekly MACD oscillator is in a bearish mode and ever so close to crossing below zero line for an outright sell signal.

In this Point and Figure chart of AVGO, below, we can see a large distribution pattern. A trade down at $222.48 will be bearish and the chart already shows a $199.20 price target. 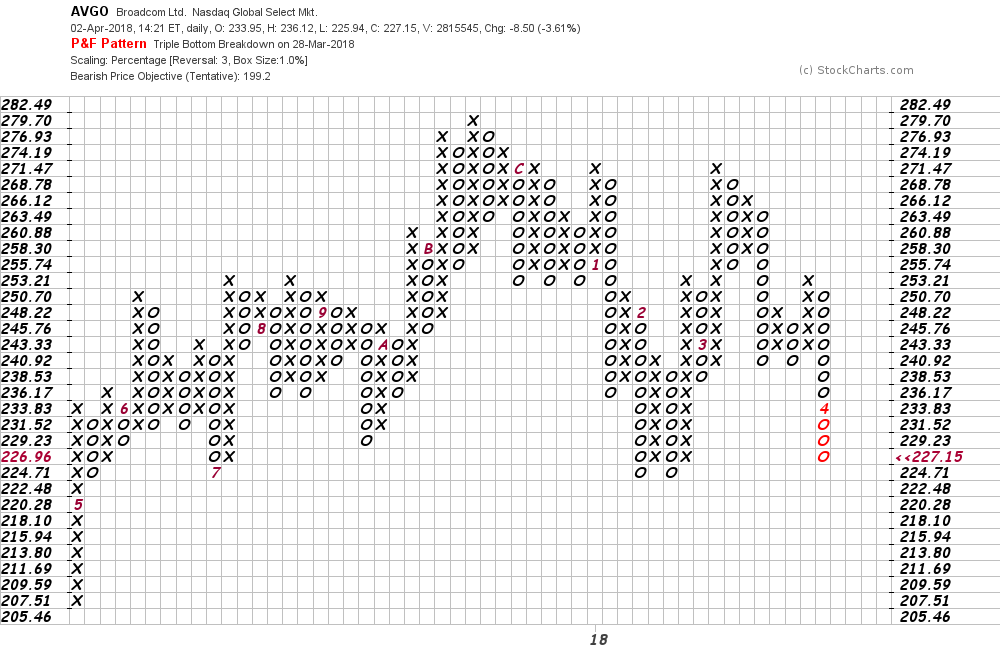 Bottom line -- it looks like AVGO has been topping out for months and a decline to key support around $180 is the next likely price target.