"I enjoyed climbing with other people, good friends, but I did quite a lot of solo climbing, too." -- Edmund Hillary

Is this the death of the FANG stocks? All four FANGs -- Facebook (FB) , Amazon (AMZN) , Netflix (NFLX) and Google/Alphabet (GOOG) , (GOOGL) -- have fallen during the past 30 days, and all but AMZN are down over the past three months as well.

But while it might be hard to remember, this isn't the first time that we've had to ask about the FANGs' possible demise. After all, the four have struggled at times with sideways movement (mid-2017) or even outright contraction (early 2016).

The crux of the matter is that prior to the tech sector's recent overt shakeout, the segment had risen to account for more than 25% of the S&P 500. But remember, the index has 10 other sectors.

Now, the S&P 500's 11 sectors have never been evenly represented, and the index has always been given to overrepresenting the "hot hand," so to speak. That said, investors have long been drawn to passive index investing and away from active stock selection, which can create sector rotations more violent than what most people likely anticipate.

Many index funds that weight by market cap end up overweighting certain stocks as those names outperform the pack. This can look fantastic on the way up, but creates a roller coaster on the way down. That especially applies to wild outperformers such as the FANGs.

Where do the FANGs go from here? My thoughts on that question are complex.

First, I don't see the tech sector experiencing a permanent loss of market leadership. Did you see Jim Cramer's interview Thursday night with Jensen Huang, founder and CEO of Nvidia (NVDA) ? Huang hardly seemed like a man rattled by his stock's recent short-term pullback, or by cryptocurrencies' recent underperformance, either.

My thoughts are that the demand is still there for the stock of companies that create what the future will hold. Areas such as artificial intelligence, virtual reality, gaming and autonomous driving (or really autonomous anything) are here to stay.

That's true for tech in general, but what about the FANGs specifically? Will there be demand in the future for what they offer -- social media, online retailing, cloud services, streaming entertainment and Internet search?

Yes ... but not in equal parts. I think it's likely that we'll end up tossing the FANG acronym away. In fact, we've already seen the FANG acronym changed to "FAANG" or even "FAANNG" as market pundits added Apple (AAPL) and Nvidia.

But the time has come for investors to treat these names as individual stocks rather than as a group. So, let's check the FAANNG stocks out on that basis:

I like Facebook.com, but my kids (who are in their 20s) don't use the service at all. They don't use Facebook-owned Instagram all that much, either.

Still, my thought is that although younger adults have been drawn elsewhere, Facebook.com remains a great tool for staying in touch with friends and family when you're older. Therefore, the site seems like it's here to stay, but in a much more highly regulated way given all of the recent problems that it's had with alleged "fake news" and other issues.

As for Facebook's stock, it found some support late last week around $150 after peaking above $195 in early February. It's my opinion that this name will be tradable for quite some time, but is currently damaged both in reputation and as an investment. So, I don't own Facebook right now.

President Trump did a number on this stock last week with his pointed attacks on Amazon via Twitter. The question now becomes just how much resistance AMZN will find as it tries to retake its 50-day simple moving average of $1,469.

This is the one FANG name that I remain long on. But the problem here for me (and for many other investors, I bet) is that even with a 200-plus-point decline, Amazon is still trading hundreds of points above my cost basis. That makes it awfully tough for AMZN to establish support.

Still, Amazon remains the "Death Star" among retailers, seemingly able to kill off all competitors. The company is also a leader in both Web and cloud services. Bet against CEO Jeff Bezos? Not me.

Now, Apple seemed to be differentiating itself nicely until it went "poof!" late last week after Goldman Sachs cut estimates for both 2018 iPhone sales and revenues. Sales and revenues for 2019 and 2020 remain suspect as well.

Of course, I'm not long Apple because of its product development; I believe the firm to has gone stale in that department. Instead, I'm long because I've personally found it difficult to break myself out of the Apple ecosystem. It's just too much trouble.

If I think that way, I bet that other people feel that way, too. So, think "recurring revenue stream."

I came into 2018 long NFLX, then sold the shares just ahead of earnings, satisfied that I had made a killing. But If you follow the name, you know how much Netflix rose from January until early March.

I think that might make NFLX vulnerable now, but the stock still seems to be outperforming its peers. However, it seems like competition in the space will only grow from here. Walt Disney Co. (DIS) is coming, and armed with loads of content at that.

So, I'm fine with trading Netflix around events like earnings, but am more cautious about owning the stock for the long term.

I'm not only long this stock, but Nvidia remains one of my long-time favorites for the long term.

Still, that doesn't mean that I won't trade around my core position, and last week's action was a gift. Nvidia sold off hard on the announcement that the firm was taking its autonomous-driving program off public roads while waiting to see what it could learn from the recent fatal Arizona accident involving an Uber autonomous vehicle.

This name scares me a bit, as GOOGL dipped below $1,000 last week to its lowest intraday prices since October.

The stock did retake its 200-day simple moving average on Friday, but GOOGL remains miles below its 50-day SMA and technically weaker than some of the other FAANNGs. I'm OK with renting this name on news, but as for buying and holding, the jury's still out.

Chart Of The Day: Lam Research

I'll admit that I took a wee bit of profit on Lam Research (LRCX) during last week's tech wreck. It seems prudent to protect your winners when things get dicey.

Still, LRCX has been one of my long-time top performers, and last week, Mizuho initiated the name with a "Buy" rating and a $250 price target (vs. Thursday's close at $203.16). The week before that, Bank of America Merrill Lynch initiated coverage of LRCX with a "Buy" recommendation and a $305 price target.

All of that said, Lam has serious headline risk regarding any potential U.S. trade war with China.

Let's check out the stock's chart: 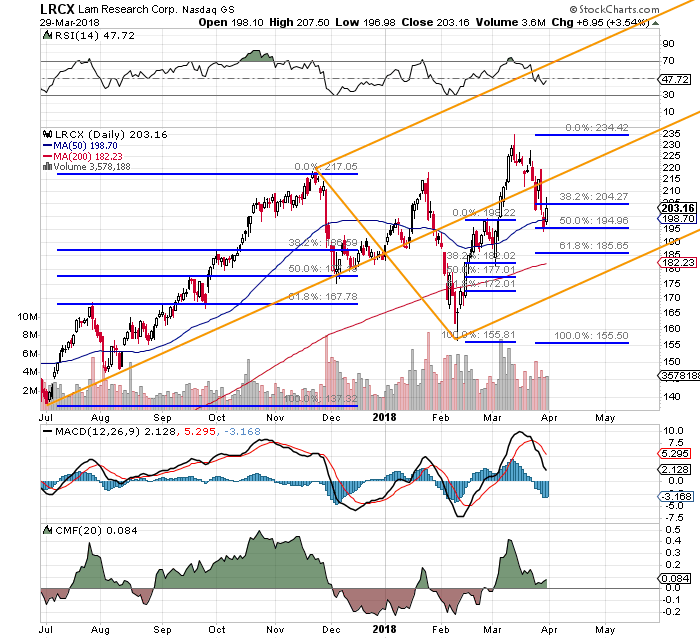 What I noticed first in the above chart is a softer Relative Strength Index (marked "RSI (14)" above) and a suddenly vulnerable daily Moving Average Convergence Divergence oscillator ("MACD" above) now that Lam's nine-day exponential moving average has gone decisively negative.

That said, the stock's Chaikin Money Flow ("CMF" above) has remained in the green since Lam made those positive announcements in early March. LRCX also appears to show some obedience to its Fibonacci levels. The 50% retracement level worked as support back in December and appears to have just worked again, although off of a different timeline just last week.

The most recent Fibonacci retracement level is also close enough to Lam's 50-day simple moving average ("MA (50)") to say that we do indeed hit some traction here. Look further and you can also see that the central trend line provided by the Pitchfork has worked nicely as a rising pivot since early December.

What that means to me as someone who owns Lax is that a break at $194 would allow for movement lower to around $185. But I also think that absent any negative China news, LRCX will be drawn toward $220 as we approach the company's next earnings report.

Also, don't discount how well CEO Martin Anstice comes off at times like that. He's a leader that I would bet on (and actually do).

Now, a $203 stock is kind of a tough nut for a small investor to get involved with, so here's an idea on how to play Lam using a so-called "bull-call spread."

Get an email alert each time I write an article for Real Money. Click the "+Follow" next to my byline to this article.
TAGS: Investing | U.S. Equity | Technology | Consumer Discretionary | Markets | Stocks

SNAP's Cracking, but Will It Pop?

After a rough few days, Snap Inc. appears to be getting some bets that the stock could pop.