Check Point Software (CHKP) broke out on the upside in January, emerging from a multi-month base pattern. CHKP has rallied strongly already, but after a pause we could see further gains in the months ahead.

Back on Dec. 21, we wrote about CHKP, and concluded "CHKP could move higher from here, but it would probably surprise me. The indicators suggest further sideways price action. If CHKP was able to finally clear the chart resistance in the $85 to $90 area then we might see a advance to around the $105 area." As it turned out, CHKP turned up strongly in the latter half of January and has reached $104. Now what?

Notice how the On-Balance-Volume (OBV) line was neutral in November and December, and then moves up sharply starting in January? The buying in January was very aggressive. As prices made a higher high this month, the OBV line has not confirmed the advance with its own new high.

The 12-day momentum study makes lower highs from January to March, giving us a bearish divergence and telling us that the pace of the rally has slowed.

In this weekly chart of CHKP, above, we can see that prices broke out of a much longer base pattern than we could see on the one-year chart. Prices are above the rising 40-week moving average line. The weekly OBV line is bullish and rising, and the Moving Average Convergence Divergence (MACD) oscillator is very bullish. 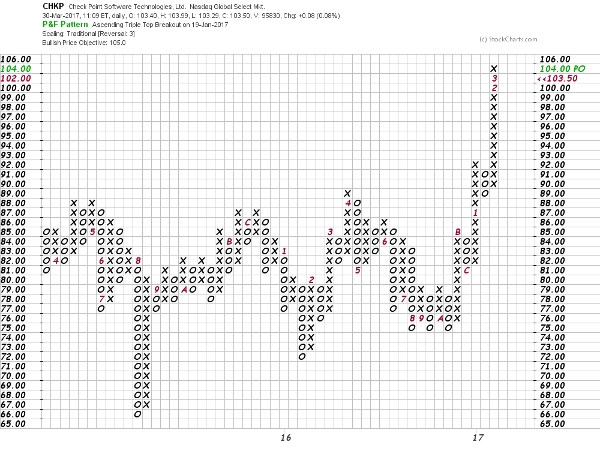 In this updated Point and Figure chart of CHKP, above, we can see that the $105 price target was almost reached. Time for a pause.

Bottom line: Slowing momentum and a divergence with the daily OBV line suggest that CHKP could trade sideways in a $105 to $99 trading range for a few weeks before trying the upside again.

Get an email alert each time I write an article for Real Money. Click the "+Follow" next to my byline to this article.
TAGS: Investing | U.S. Equity | Technology | Features and Commentary