CyberArk Software (CYBR) has been trading sideways since August in a tighter and tighter range. Most chart watchers probably would call this pattern an equilateral triangle. An equilateral triangle has a rising trend line along the bottom and a declining trend line along the top. Visually, the demand (rising trend line) and the supply (declining trend line) are balanced. The problem for technical analysts is to decide, hopefully in advance, in which direction the triangle will break out. On the upside or the downside? Let's dig into the charts and indicators to see if we can glean any clues.

In this daily bar chart of CYBR, above, we can see an initial rally from April to early August. There is a swing lower to an October low followed by a rally to a lower high in November. Another decline unfolds to a slightly higher low in late December and one more advance to a February high. Back and forth in a tighter and tighter range. The pace of volume slows from the best levels in August. The On-Balance-Volume (OBV) line moves sideways or slightly lower as traders lack commitment. This triangle pattern is now very close to its apex, so we are due or maybe even overdue for a breakout.

In the lower panel is the 12-day momentum indicator, which shows both declining momentum readings and rising momentum readings since November. In March we see a small bullish divergence as prices move lower but at a slower pace. Is this enough to tell us to be ready for an upside breakout?

In this weekly bar chart of CYBR, above, we get no clarity. We can see the triangle pattern and prices are just below the 40-week moving average line. The weekly OBV line has been flat for over a year and the MACD oscillator is not displaying any trend strength. 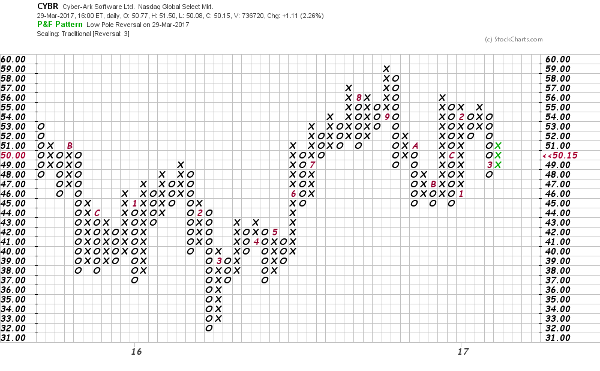 Bottom line: Strength above $54 could mean CYBR is headed higher while weakness below $46 may indicate CYBR will decline to the low $40s. My gut is leaning to a downside break, but that is not a disciplined approach.

The Trade Desk: Another Unhappy Ending for Momentum Traders?

Like other momentum stocks, the provider of software to manage digital ad campaigns traded way over its skis and suddenly finds itself tumbling.

Jim Cramer: Where's the Tech Bottom? The Stocks Will Tell You

Can you buy Tesla, Spotify, Zoom? Each is a different story, so let's look at tech stocks and how they're moving as we go into the reopening.