"Each day provides its own gifts."

The beatings continued specifically for the Tech sector on Wednesday, as well as for the Nasdaq Composite more broadly. This weakness extends itself well past those boundaries, however as most of the economy has become reliant to some degree... on technology. Think technology has not crept into home building, the selling of a pizza pie, or the writing of business articles in the middle of the night? You'd be surprised. The point is that demand for web services, the data center, machine learning, virtual reality, and artificial intelligence will not cease. Not for a minute. The trick comes in properly pricing current and future demand, and then factoring in both margin expansion (or lack thereof), and competition. Oh, I forgot one other negatively biased contribution. This one might be the most difficult factor of them all to price in. Regulation.

A few days ago, only a few folks likely had ever heard of the NYSE FANG+ index. This performance measure that tracks the 10 largest tech associated names saw a 2.4% decline yesterday, and has now become part of the "talking head lexicon". Well, Lah-di-dah. Beat it, kid. The bottom line is that a couple of high tech vehicles were involved in fatal accidents, internet names are likely to face increased regulation regarding the handling of users' personal data, and rumors ran wild that Amazon (AMZN) , aka the "Death Star", had wandered into the administration's cross-hairs regarding the firm's impact on competitor businesses. So, Info Tech has led equity markets lower going into quarter's end.

Passive investment has led to market inefficiencies that are both unfair to the innocent, and create opportunity for those fortunate enough to spot names unfairly, or overly punished. Let's illustrate.

Easter is considered by Christians to be the holiest day of any calendar year. That day, for those unaware, is this Sunday. Outside of religious observation, as always, there is a commercial aspect to the day. Many children around the world will participate in "Easter Egg Hunts". They will search their homes, their yards, and their playgrounds for in some cases...actual hard boiled eggs, but in most others, plastic eggs filled with candy. There is no penalty for not finding very many eggs, and parents usually ensure that every child finds something.

Now, amidst the wreckage of the tech sector... not to mention what's left of the financials, discretionaries, materials, and industrials, we search. We search not for eggs filled with candy, but for equities that might just climb from where they are now. Maybe from the ashes of despair rises a phoenix. or three, or five. Oh, just one thing. There are indeed penalties for being wrong, and nobody is going to make sure you find something nice. Hats and bats, gang.

Closer to Zero Than A Hundred

From my own book, I'll throw two of my longs at you that have both suddenly performed well after recent weakness. Take General Electric (GE) for instance. Trouble funding pension obligations? Even after a 50% cut, a still irresponsible dividend payout? Forward looking numbers that really seem to be anyone's guess after having for years released the most confusing, and complex balance sheets imagine-able. Why am I long these in the first place? You know, I should have been a cop. Suddenly WTI Crude pops. This firm has become in partiality an energy sector play. If WTI reacts well to $64 support, does that bode well for GE? Warren Buffett rumors aside, last week, Melius Research indicated in a piece that perhaps prices here in the $13's undervalued the sum of the parts of General Electric by as much as 25% in the event of a break-up. If one does go there, I like to write something against the name, at least on the call side in order to lower one's basis... just in case the rumor mill swings the other way.

How about Kratos Defense (KTOS) , Sarge? The name just plumbed levels below $9 in the wake of noted short seller Ben Axler's recent stance. Yesterday, the stock soared 8.7%. Who are these guys? They make drones. They also produce other high end products for the Department of Defense, but primarily... they make drones. The firm has landed $270M in military contacts over recent months, and has now received permission from the State Department to sell it's wares to allies. Now comes news that the Air Force Research Laboratory is working on a program known as "Loyal Wingman". In theory, the program would allow an F-35 pilot to surround said pilot's aircraft with multiple unmanned drones that this pilot controls. The drones could both protect the aircraft, and be sent forward to complete the more vulnerable parts of any mission. Two drones being developed for this program are the Mako, and the Valkyrie... both manufactured by yup... Kratos Defense.

Facebook (FB) ? No. Tesla (TSLA) ? No. I mean it's hard to gauge where the ball stops rolling for either of these. You have to figure that the cult following steps in for TSLA at some point. Twitter (TWTR) ? That stock faces the same somewhat more regulatory scrutiny that all of the other internet stocks do. How about United Parcel Service (UPS) ? Old school. The firm has guided higher for fiscal year 2018. The name yields 3.54%. Trade war jitters that may or may not be overblown have impacted the name. On top of that, Amazon (AMZN) has talked about delivering their own packages, and the firm will have to negotiate with their teamsters this summer. The stock had suffered a technical death cross in mid-March, and paid for it. Now the stock has shown some recent support above par. Maybe worth an entry level investment at this point. That labor issue, could by the way, end up being a positive.

Two other very different firms have caught my recent attention, and some of my investment dollars as well. I have started to scale into both of these names, and currently stand at between 10% and 20% of what I consider to be my intended long position in both. In other words, so far, I've played these two pretty well. That said, in both cases, these stocks are getting to the point where I may want to make a more significant stand. First, I speak of Salesforce (CRM) , down largely due to the tech rollover as well as the announced (and pricey) acquisition of MuleSoft (MULE) . No broad exposure to China. Second, how about Walt Disney (DIS) ? The name is transitioning away from some of it's broadcast reliance on cable television. This declining business coupled with the expense of building out futures multiple streaming lines based on the firm's massive vault of content is what's being priced in now. Where to from here for their advertisement income? Maybe lower. No promises, gang. The movies are hot. The cruise lines are hot. The theme parks are hot, not to mention lodging. A few unpredictable quarters could still be in the offing. Then, though, I think perhaps we go... to infinity, and beyond. We need to see 102 support first. That's a ways off. That's also called getting in late. 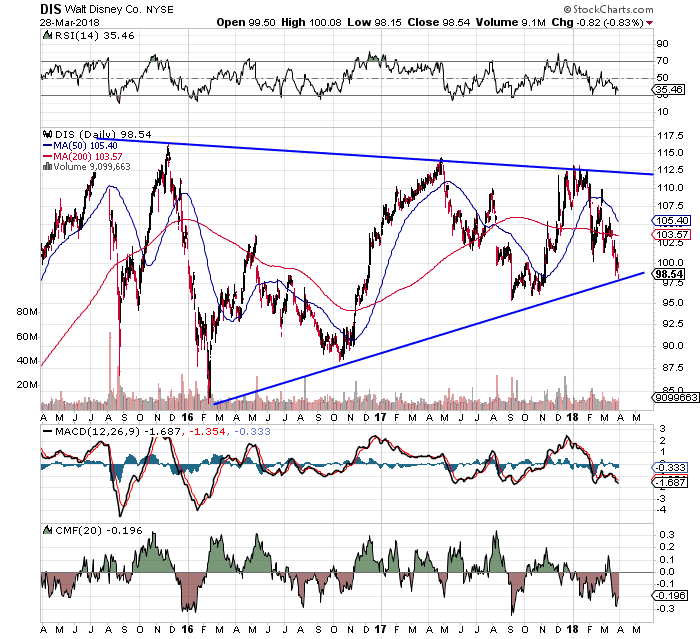 On a three year chart of this name, the most notice-able thing that I see is the steadily declining series of highs coupled with the steadily rising series of lows. Meaningful? Probably. To this trader/investor with more than three decades of experience under his belt, this could mean that something violent for the name is on the horizon. This does not, however, imply direction. For that, let's get in closer. 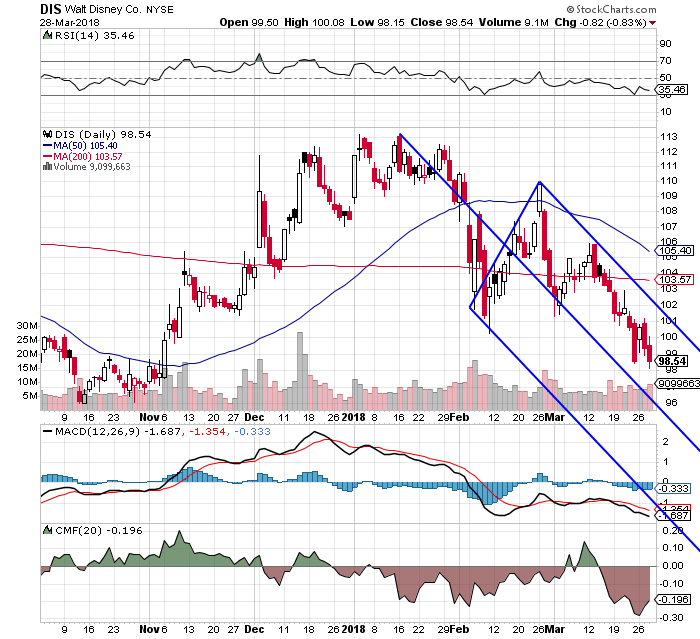 The technical picture, even up close...is still kind of sloppy. Money Flow is awful. The daily MACD offers little help. Relative Strength is anything but. In fact, this stock is not all that far away from a death cross. That said, the name shows fairly strict obedience to a month long Pitchfork model. The implication there, is possible adherence to a short term range of 96 /102. For me, that means that I'll dig in a bit from here down to 96. As you can see, that level held on multiple downside attempts last autumn.

I am only in the early stages of building this position. I think that this name, once it rights the ship could once again be a core position of mine. That is how I am planning. I want to do this incrementally though. Disney reports on May 8th. For those looking to raise capital while exposing themselves to equity risk at a discount, DIS monthly put options expiring on May 18th went out last night at 2.16 for the 95's, 1.54 for the 92.50's, and an astounding 1.10 for the 90's. Think about that. Willing to expose yourself to the possibility of having to buy Disney at a net 88.90 in a month and a half (last sale 98.54), and have someone else buy lunch for you and a couple of pals today? Hmm. You could do worse.

Get an email alert each time I write an article for Real Money. Click the "+Follow" next to my byline to this article.
TAGS: Investing | U.S. Equity | Transportation | Technology | Futures | Entertainment | Gaming | Stocks