It's do or die time for Samsung.

The tech giant will hold an event in New York City on Wednesday to unveil its new Galaxy S8 and S8+ smartphones (leak of the phone seen below) to an eager crowd. Yours truly will be among the group, so be sure to follow my tweets @BrianSozzi. To say expectations are high on these two smartphones is an understatement as Samsung tries to bounce back from its exploding phone debacle last year.

KGI Securities analyst Ming-Chi Kuo is expecting Samsung to ship 40 million to 45 million S8/S8+ units in 2017, TheStreet reports. This is slightly less than the 52 million unit shipments that the S7/S7 Edge saw in 2016 after its March release. Ultimately, this is nothing but a wild guess this time around due to lost consumer trust on Samsung smartphones and the rumored hefty $900 price tags on the new offerings. Samsung's reputation fell noticeably in Harris Poll's annual report on the companies with the best reputations. Samsung was 49th out of 100 at the end of 2016, vs. seventh out of 100 the year before, TheStreet points out.

But if these phones flop it won't be because Samsung didn't try to make something stellar. The smartphones are expected to be the first to use Samsung's new digital assistant Bixby, an answer to Apple's (AAPL) Siri and Amazon's (AMZN) Alexa. Should Samsung sell people on Bixby, it could open up possibilities for the software in smart home applications and autos. Upgraded security features have also been rumored on the phones, as has an improved camera.

If one is feeling lucky and wants to do some trading on the news, Broadcom (BRCM) and Qualcomm (QCOM) are in the spotlight. Each will have prominent roles in the new Galaxy offerings, TheStreet reports.

Count me as not feeling so upbeat on Samsung into the event, however. Not only is the company dealing with impossible expectations, but the Galaxy smartphones arrive before quite possibly the biggest Apple launch of all-time. The play here remains Apple, unless Samsung executives simply blow the crowd away. If they do, it would maybe get Wall Street to temper its strong estimates on Apple's upcoming iPhone at which point rotating into the aforementioned Samsung suppliers could make for a better short-term trade.

Sears and its rich investors: Shares of Sears Holdings  (SHLD) have exploded 32% the last two trading sessions due to buys from major shareholders Fairholme and CEO Eddie Lampert. As TheStreet reports, these Wall Street titans could be banking on the demise of Sears the retailer and the rise of Seritage Growth Properties (SRG) as a major commercial real estate holder. All in all, Lampert remains an embarrassment to the title of CEO.

TheStreet's Lindsay Rittenhouse snapped a photo of a new Primark store that opened in New Jersey, which rents out the top half of Sears (and other Sears locations). All U.S. retailers should fear the arrival of Primark. 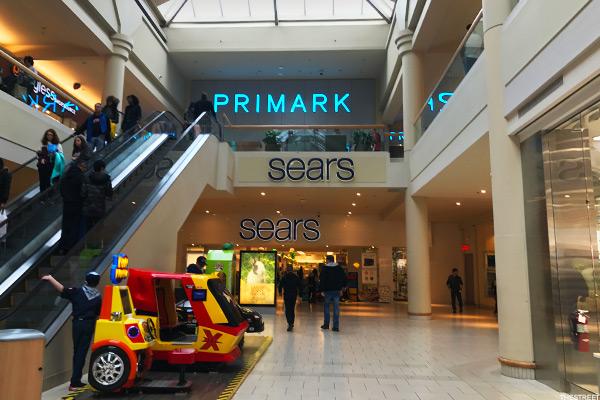 Tesla's Model 3 will be weird in one regard: So yeah, Tesla's (TSLA) Model 3 won't have gauge clusters. The Model 3 won't receive a heads-up display and will rely solely on a large central screen to display all of its key details, reports Car Scoops, which cited tweets from Elon Musk. Doesn't this seem ridiculously dangerous? Most automakers are shifting to heads up displays on windshields so drivers can focus on the road ahead of them, instead of taking a split second to stare at the center console.

@FredericLambert It still has one display

At least people are buying new slick-looking Mercedes: Mercedes-Benz saw a 33% increase in sales in the U.S. of its cars boasting its AMG high-performance badge, reports Automotive News. Mercedes currently has 34 AMG models on sale in the U.S. That figure is expected to grow to 42 AMG models by the end of 2017 as the luxury automaker unveils several new midsize models. Meanwhile, Mercedes said on Wednesday that it will bring new electric cars to market much faster than expected.

Getting wasted in the U.K. will cost more: Joining Apple (which raised app store prices in January) in raising prices in the U.K. due to the slide in the pound post Brexit is liquor maker Pernod. The world's second-biggest spirits company behind Diageo (DEO) will soon hike prices, reports Reuters. U.K. Prime Minister Teresa May will trigger Article 50 on Wednesday, getting the Brexit process underway.

Buzzfeed could be looking at an IPO: If only the people that read Buzzfeed's cat listicles knew what an "IPO" was. The media company is reportedly exploring going public in 2018, reports Axios. The company was reportedly last valued at about $1.7 billion. A Buzzfeed IPO could be a nice windfall for Comcast (CMCSA) , which is a prominent investor.

Apple and Comcast are holdings in Jim Cramer's Action Alerts PLUS Charitable Trust Portfolio. Want to be alerted before Cramer buys or sells AAPL or CMCSA? Learn more now.

Get an email alert each time I write an article for Real Money. Click the "+Follow" next to my byline to this article.
TAGS: Investing | U.S. Equity | Technology | Consumer Discretionary | Consumer | E-Commerce