They ran the market up 170 points yesterday on a strong consumer confidence report. If consumer confidence was a good indicator, then we'd all be gazillionaires. Consumer confidence is, at best, a coincident indicator. That means it tells you how people are feeling now. It says nothing about how they are going to feel three months from now, let alone a year from now. 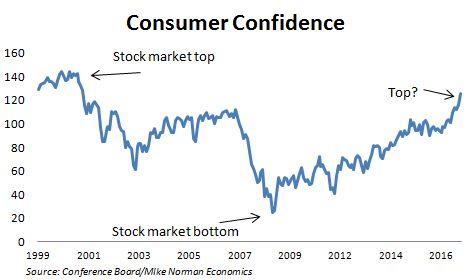 In January 2000 consumer confidence hit an all-time high of 144.7. The Dow Jones Industrial Average and S&P 500 peaked right at that time (Nasdaq two months later) and we went into a fierce bear market for the next two-and-a-half years. The economy went into recession and we only came out of it because of President George Bush's stimulus. That's the one where the government literally sent checks out to people. (Yes, that works.)

In February 2009 the consumer confidence number fell to an historic low of 25. Twenty-five!! That was the absolute bottom of the bear market, Great Recession, or whatever you want to call it. The Dow hit 6500. Did you sell there because confidence was low? If you did you sold in a hole so deep that you still are trying to crawl out from it.

Why, then, are they confident? They're confident because they have jobs. That's great, but employment isn't even a coincident indicator; it's a lagging indicator. The economy kept losing jobs for eight months after the Great Financial Crash ended in March 2009. Better yet, the economy added over 1 million jobs in 2007, right before we plunged into the Great Recession. So, don't lean too much on the job numbers right now. The fact that they're making people feel good doesn't carry a lot of weight.

I use confidence as a contrarian indicator. I like to sell at extreme highs and buy at extreme lows. Is March's reading of 125.6 an extreme high? I cannot know for sure until after the fact, but right now I'm betting it is close. By the way, I sold in January 2000 and I was buying in late 2008 through March 2009 and beyond, when confidence was plunging. It worked out well. Very well. That's all I can tell you.

Get an email alert each time I write an article for Real Money. Click the "+Follow" next to my byline to this article.
TAGS: Investing | U.S. Equity | Economic Data | Markets | How-to | Risk Management | Stocks

Plus, it could be quite a while before the labor market can absorb all those people who are out of jobs.

I suspect that we're more likely to see corrective action in the form of a rotation rather than broad selling in the indices.

I expect trading to remain robust once we are past the big earnings news tonight.

This Latest GDP Report Had No Good News for You

I believe it's time to increase the share of your wealth that's composed of hard assets.

Get Ready for an Earnings Extravaganza