Martin Marietta Materials (MLM) has been correcting lower over the past two months, filling a gap from November. MLM held on a test of the rising 200-day moving average line, but the bigger question is whether the rally from early 2016 can resume. Let's see if the latest charts and indicators can shed any light on the subject.

The daily On-Balance-Volume (OBV) line is flat both times -- and suggests that buyers and sellers are in balance as prices declined. There is a small bullish divergence in September and October between the lower price lows and the higher momentum readings. We can see a similar bullish divergence in February and Marc,h as the pace of the price decline slows.

In this weekly chart of MLM, above, we can see two major trends in the past three years. First, a broad sideways trend from 2014 to early 2016. Since the beginning of 2016, prices have trended higher. Prices are currently testing the rising 40-week moving average line.

The weekly OBV line peaked in early November and has moved lower since. On this timeframe, the declining OBV line suggest that investors have sold into the rally to $240. In the bottom panel is the Moving Average Convergence Divergence (MACD) oscillator, which is pointed down from a liquidate-longs sell signal in early February. The position of the MACD oscillator now is different from the position it was in at the last correction in October -- where the MACD oscillator was turning up to a fresh buy signal. 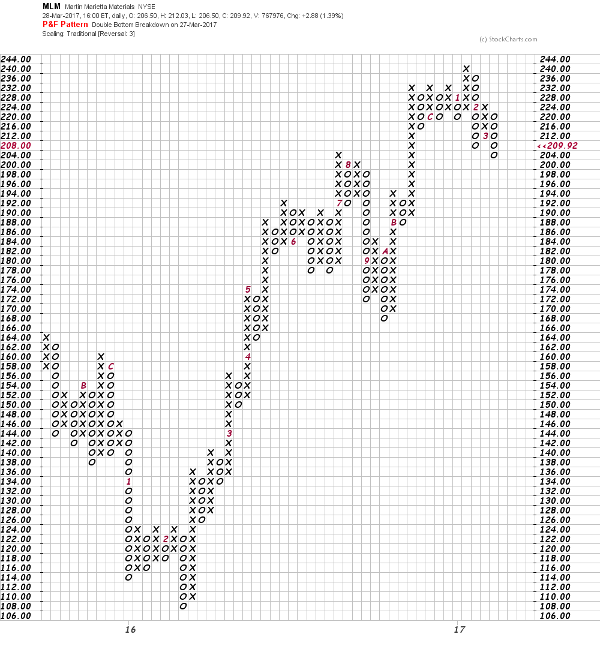 In this Point and Figure chart of MLM, above, we see just the price reversals of $4 or more, and we ignore smaller movements. MLM is in a down column (Os), but should be finding some support around $208 to $204. A rally to $216 will help turn this chart positive, and strength to $228 would be even better.

Bottom line: MLM looks like it wants to stop declining and move higher again, but some more positive price action would be preferred. Aggressive traders should only buy strength above $216 or a close above the 50-day moving average line up around $220.

Get an email alert each time I write an article for Real Money. Click the "+Follow" next to my byline to this article.
TAGS: Investing | U.S. Equity | Industrials | Basic Materials

Looking at This Stock Will Give You a Light Bulb Moment

Here's how to play this Acuity Brands, a global leader in light fixtures.

The intertwined companies made healthy gains at the end of the week, though the reason for them wasn't immediately evident.