The question of what to do with Nvidia (NVDA) has spiraled well beyond Nvidia in my view.

Facebook's issues with privacy might be the first ripple of a wave that grows into a tsunami.

Tesla (TSLA) is finally, finally starting to get a taste of valuation reality although you can't tell by reading Elon Musk's twitter feed.

Twitter (TWTR) ? Yeah, that's another ripple from Facebook, but they've taken their beating as of late and actually look more stable than most other tech this morning, ironically after Citron issued another short view on the name.

Even with everything going on, NVDA was basically untouchable. At least until two days ago. But now there are concerns. The question becomes: are they justified?

For Nvidia, I'm tossing aside the daily chart to focus on the weekly picture. The tricky part about the weekly chart is we can't make a conclusion today. It's not the end of the week. We can get an idea of what the picture will look like after the close tomorrow even looking today. It's kind of like glancing at a polaroid every few seconds while flapping the picture as it develops. Alright, so many of you are too young to even get that reference, but I digress. 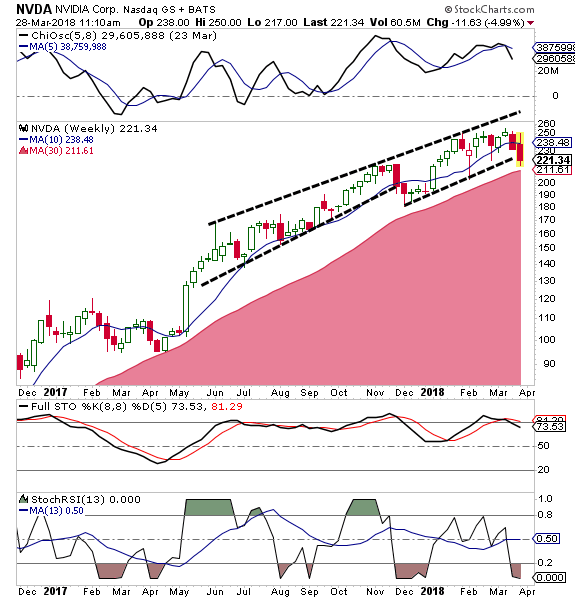 The biggest issue for bulls is the possibility Nvidia will lose the support line that has been there since December. Recent support has been equivalent to the 20-week simple moving average (SMA). This was a change from most of 2017 where the 10-week SMA was support. Logic turns me to the 30-week SMA for the next level of support. If I were going to take my short, it would be around $210-$212 on the thesis the 30-week SMA would hold like it did in April 2017. Unfortunately, that would place a stop around $185, so a trader would have to be willing to take on around 10-12% downside risk. I do think the upside return could be 20-25% if tech can find a base here.

Secondary indicators don't offer much in the way of optimism though. We're not really oversold anywhere of importance. Rather, we are seeing rollovers from overbought positions in the Chaikan Oscillator and Full Stochastics which have both required periods of consolidation before bullishness regained control.

Fundamentally, we're seeing hypergrowth repriced. Nvidia holds a $141 billion market cap, but carries $10 billion in sales, $3B in income along with strong margins and solid growth. While I'd love to see a little less debt, it isn't a major concern, rather me being nitpicky. The issue comes more from perception now. Nvidia pulls income (and potential) from many areas including gaming, data centers, AI, autonomous driving, crypto mining demand, medical imaging, smart cities, and manufacturing.

Gaming is still the core driver and I don't expect that to change. The drag at the moment is crypto pricing cooling off and the tragic death of a pedestrian as a result of being struck by a self-driving car in Arizona. The Uber car, which killed the woman, used Nvidia's hardware; however, it did not use any software from Nvidia. The root cause of the accident is still being determined although I don't think it will fall on Nvidia's shoulders. Nvidia is adjusting to a more cautious approach for testing self-driving vehicles introducing a cloud-based virtual reality program. My main concern with this type of testing is it will be hard pressed to factor in the random actions of people. I believe this will be the biggest challenge for autonomous vehicles.

The idea of a smart city to pair with smart cars holds some logic though. If cars along with other components of the city streets can communicate information, the random actions of people are lessened as people are removed from the equation. Kinda cool, but also scary. It is possible, we'll see more upside in Nvidia from smart cities than autonomous cars. Still, these are both future possibilities of revenue drivers and should be viewed as such: possibilities.

Artificial intelligence is probably the main growth driver moving forward. Crypto will come and go, but with new competition coming from Bitmain in the form of an ASIC chip for Ethereum mining, I'd put my chips on AI and data centers. The total addressable market for data centers should grow to $50 billion by 2023 and with Nvidia's recent deal with ARM, an AI move into the Internet of Things is on hand. With millions and millions of IoT devices, AI should be the next big driver for Nvidia.

Overall, I don't see a glaring negative specific to Nvidia. But Nvidia is a victim of its own success. Every fund owns it. Most investors are exposed to it in one form or another. For now, it will be emotionally driven, and charts provide the best view for that. So, the thesis is either buy on a successful test of $210-212 or buy here and stop on a weekly close under $210. Fortunately, the stock has a liquid options market, so a defined risk approach can be used. I favor a mix, buying one-third here, and looking toward $210 for the rest with $185 as my stop.

The Market Is Setting Up for the Next Big Move

Despite the lackluster action there are some pockets of good stock picking again.

Jim Cramer: 3 Companies for the Moment

Splunk, Palo Alto Networks, and Nvidia thrive when so many others are faltering.

How to Trade Nvidia Now

My expectation is that at some point Friday there will be some profit taking after the run that we have seen.