"The present time, together with the past, shall be judged by a great jovialist."

What now? Has the music stopped? Was that the last dance for tech. Sure looked like the group recovered on Monday. Everything seemed okay on Tuesday... until mid-day. The investor inside this middle aged man's head has always believed in the sector, still believes strongly in the demand story that had propelled the semiconductors, and the purveyors of software to ever higher levels. As readers know, there is a cautious side to me. I hedge many of my positions through the options markets, and my cash level has not been below 27% at any point since the third week of January. That level is currently at 31.2%, and has been as high as 47.5% over that time span.

A trader more than an investor has to be proactive. You guys are well aware that I love the Nvidia (NVDA) name. If you read yesterday's column, you are cognizant of that fact. You would also be well aware that in that morning note, I warned that if the Pitchfork model broke, the stock could trade down to 226 from the 244 plus where it had gone out on Monday. The name closed at 225.52. I ended the day as long as I was at the opening. Understanding your levels is key. I don't know where the stock goes from here, but I sold 50% of my stake the second I saw that Pitchfork break. I re-purchased my shares close to the low of the day, only because I had just come off set, and the regular session was running out of time. Not because I am some kind of genius, but I saw the name trading well below my low level. I also closed my short put options position that I had come into Red Hat (RHT) earnings with. Why? Because the name opened above my target. Thank goodness. That stock came in 14 points after that.

My P/L was negative yesterday, as was almost every net long investor's. Yet, my losses were less severe than they probably should have been. My most active book (I run several) suffered a 0.7% loss on a day that the S&P 500 gave up 1.7%, the Nasdaq Composite ran to a 2.9% decline, and the sector that I am most heavily exposed to (Information Technology) lost 3.2%. There are three ways to keep yourself from blowing up on an awful day.

1) Preparation. When you know the market is volatile, do not be embarrassed to be at a much higher cash level than the rest of the Street. Remember, only you can defend you. Only you can defend those that you love. In fact. that's your highest responsibility.

2) Discipline. Have a target for everything. Know where you want to go. Obey those targets. You can see that this worked for me in RHT. I had a 176 price target on Apple (AAPL) . That target was hit, in fact the stock went to 182 in March. I allowed my discipline to lapse. Guess what? The stock closed at 168.34. I knew better. I am known for my strict adherence to my set of disciplines. Egg on face. Lesson learned, even this late in my career.

3) Plan of Action. Yesterday was NVDA's big investor day. CEO Jensen Huang was going to offer the keynote address at their GPU conference. On most occasions, this would be an upward catalyst for the share price. I knew what I wanted to do, if a certain technical factor changed. That saved my day from a real disaster. Not a pat on the back. The result of actually skipping mindless entertainment at night, and putting in the homework.

From my perch, high above the field, I watch the action. Equity index futures take another leg lower as European markets open. The US ten year Treasury Note gives up a mere 2.754%. The spread between the yield on that product and the yield on the two year variety is now "up" to 50 basis points after having been even lower. This is not a good thing for traditional bankers. These products have not acted right since the FOMC policy meeting last week. It was in the wake of that meeting that I reduced exposure to the space, and completely exited my Bank of America (BAC) long. I will hang onto my long in Citigroup (C) , based on the $20B that they have pledged to return to shareholders and I will remain long 60% of my original size in Goldman Sachs (GS) . I won't sell the rest of those shares until I see how they fared trying to trade this volatile environment. They do have an 0-2 count and have now fouled off a couple of pitches though.

As for the Tech sector, I have one rule that works here. Your quality of life matters. If you have an investment that bothers you when you are trying to sleep, or interacting with your children, then you have violated your personal tolerance for risk. Regardless of the fundamentals, or technical story in place, you need to trim the size of whatever it is that is distracting you from the rest of your life.

Markets appear to now be clearly in distribution mode. Since peaking in late January, the Dow Jones Industrials have surrendered nearly 7.3%, but the S&P 500, the Nasdaq Composite, the Russell 2000, the Dow Transports, and the Dow Utilities are all sporting minus signs. At -1.9%, that Nasdaq Composite would be your "out-performer". The US dollar looks a little stronger today. That's not going to help anyone.... not even the gold crowd, unless haven seeking really kicks in.

Consumer packaged Goods is where the crowd went yesterday. Think Pepsico (PEP), think Proctor and Gamble (PG), think Clorox (CLX). That implies to me a winner for now, as far as sector rotation goes. As far as the bond proxies go, there is some strength there now, but I don't really trust it. Not unless the central bank admits defeat, which is not yet, from my perspective very realistic. On that note, you will need to watch tomorrow's February Core PCE data for signs of increased consumer level inflation.

My hiding spot will remain defense. Yes, the president wants to take the extra money now planned to be spent in that space and build his wall with it. I believe that money far more likely to be spent on missile interception. That's why I added to Lockheed Martin (LMT), and maintained my long in Raytheon (RTN) last week. I've also initiated a long in General Dynamics (GD) on the belief that some of that money finds it's way into fast attack type nuclear submarines. To me Boeing (BA), though clearly a benefactor, remains highly exposed to headline risk regarding China.

Charts Of The Day: The Nasdaq Composite (COMP) 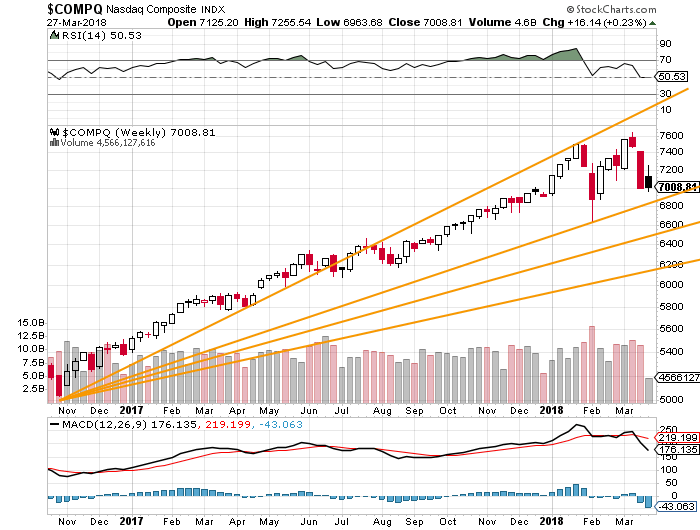 One quickly sees on this weekly chart going back to the 2016 presidential election that the volatility induced correction in February sharply obeyed the first line of support offered by a simple Fibonacci Fan model. On the surface, are we headed for another test of that rising line of support in the near term? Let's get a little more granular. 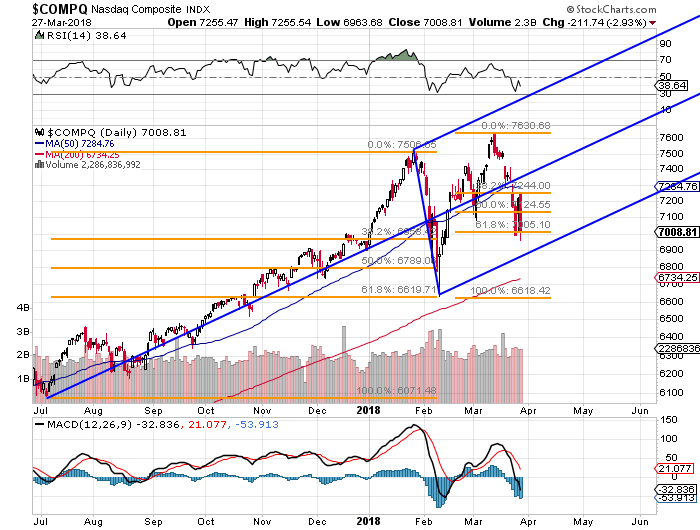 We all know that the 200 day Simple Moving Average has stood out as a line of support for the S&P 500. That spot currently stands at 2587. That moving average is not nearly so relevant to the Nasdaq Composite, and I have removed it from the chart, so as to make a neater appearance here.

What I find interesting in the here and now is how sharply the COMP responded in February to a 61.8% re-tracement of the move from the lows of July through the January peak. You can also see how this index has wrestled with a similar 61.8% re-tracement level of the move from that low through this month's high over the past few sessions. There is real danger here. If the index does not hold that line, the next offering we'll see is the rising lower trend line illustrated by the Pitchfork. That spot is currently 6900, though within a month, that line meets last night's closing level.

The problem with that, is that this would create resistance at this level, and then a broken Pitchfork... well, you did see what happened to NVDA yesterday. That said, this index could still remain on trend. In this algorithmic driven, passive (certainly not docile) investment style environment, volatility has increased, and nothing should surprise. For now, you will have to grow calloused to wild day to day fluctuations in the marketplace. Either that, or get yourself to a level of exposure that meets your tolerance for risk.

Get an email alert each time I write an article for Real Money. Click the "+Follow" next to my byline to this article.
TAGS: Investing | U.S. Equity | How-to | Markets | Stocks