Red Hat (RHT) has been stuck in a broad trading range market for a little more than two years, but now it is poised for a breakout on the upside. Here is our technical reasons and upside price targets.

In this daily bar chart of RHT, below, we see a fairly erratic trading pattern -- with sharp runups and selloffs, and several gaps in both directions. Until recently, rallies to around $82 have failed and declines to around $70 were bought.

The turns from up to down and down to up were fairly abrupt and extremely difficult to time -- at least to me. Traders trying to use moving average signals would have been whipsawed with many false signals. In early January, the price action changed. RHT rallied and rallied and broke above the resistance at $82. Prices are above the rising 50-day moving average line and the rising 200-day line.

The On-Balance-Volume (OBV) line, or indicator if you prefer, was in a decline for much of 2016, signaling more-aggressive selling. In January of this year, the OBV began to rise with the price action, showing us a new and bullish pattern to the price and volume data. The Moving Average Convergence Divergence (MACD) oscillator gave a cover-shorts buy signal in January and an outright go-long signal in February as it moved above the zero line.

In this weekly chart of RHT, above, we can see the two-year trading range. RHT crosses above and below the 40-week moving average line several times, but it is currently above the rising moving average. The daily OBV line gave us a bearish interpretation for 2016, but this weekly OBV line has been rising the past three years, shows strong accumulation and is very bullish. The weekly MACD oscillator turned up to a bullish mode in early February. 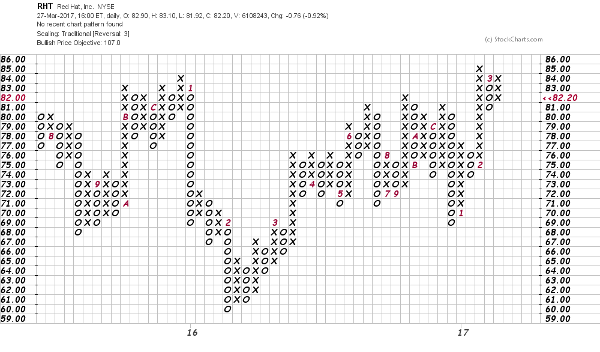 In this Point and Figure chart of RHT, above, we show the price action in a different format. Here we can see a recent breakout at $85, which cuts through the late 2015 high of $84. A rally to $86 will be a double-top breakout and allow a Point and Figure "count" to the $107 area. If we took the height of the trading range on the weekly chart ($12 or so) and add it to the breakout at $82, we would have a price target of $94.

Bottom line: RHT is more than ready for further strength. Aggressive traders could buy RHT here and add on strength above $85. Our price objectives are $94 and then $107. I would risk below $79 for now.

The news doesn't necessarily matter when markets are in a roaring bull trend.

Nvidia and Netflix's Rebounds Contain a Lesson or Two for Investors

Though very different companies, Nvidia and Netflix's 2018/2019 selloffs and subsequent rallies each carry lessons about maintaining a sense of perspective when bad news arrives.

With just a few hangups, FIVN has over the past two years on post-earnings day seen double-digit moves -- here's how to play it.

Hold Nvidia Until It Gives You a Reason to Sell

As NVDA enjoys strong double-digit top-line and triple-digit bottom-line growth thanks to the huge ramp in data center revenue, there's a lot to like.

Strong-Looking Leidos Could Soar Even Higher

Let's look at the charts of this defense and information technology research company.