The S&P 500 flirted with a sideways move for most of the day Friday, but then took a severe pounding in less than two hours at the session's end. So, I added to a number of sagging long positions, which is almost automatic for traders like us when the market takes it in the teeth like that.

We should also feel compelled to reduce exposure in the areas that are getting hurt the most. So, I sold my long positions that I felt had the worst risk/reward ratio even as I beefed up other positions.

There are some positives after the bell Friday that merit mentioning. For one thing, forward-looking valuations have come in quite dramatically. The S&P 500 and the Dow industrials both now trade at just between 16 and 17 times next year's earnings.

The Dow Transports? They're trading at barely 15 times forward earnings. And even the Nasdaq Composite has come in sharply, just hanging onto a 20 handle.

And while visible support doesn't really show up on charts, Friday's S&P 500 low occurred precisely at 2,585 -- the index's 200-day simple moving average (the magenta line below): 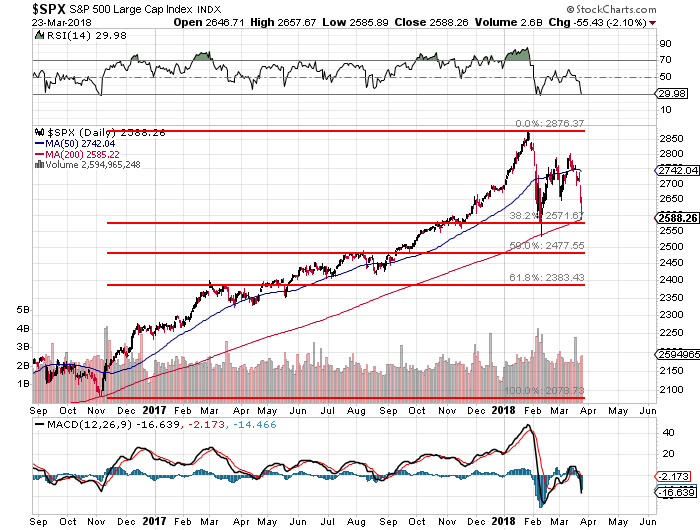 For those of you who love nostalgia, this is the same line of defense that protected the bull market in both February and during the market turbulence's going into Election Night 2016.

By the way, Friday's low was also close enough to a 31.8% Fibonacci retracement of the entire move upward since November 2016 to allow for some kind of technical improvement on Monday morning. Equity-index futures markets seem to have already gone there (at least as I write this).

Where to hide now (or to put it a little more smartly, where to start digging out)? Well, the pros have been rolling out of techs and financials and into defense and energy names. Techs with little or no China exposure in particular have gotten hurt in this ETF-run environment, but you would think that those names present a good buying opportunity.

We still have nearly two weeks to wait for a list of detailed tariffs from the Trump administration. Then a 30-day comment period will commence, allowing for aggrieved U.S. companies to make their case against the levies.

I'm not sure of many things in life, but one thing I think that I've learned is that the entire shape and scope of these proposed tariffs will shift and evolve. Entire impacted sectors will be subject to prolonged periods of headline risk moving forward.

Our choices are to either deal with it or whine like a bunch of lost puppies. Personally, I'm not much for the latter.

Getting Offensive on Defense

All 11 S&P 500 sectors bled red on Friday, but if you looked at individual industries, you would have seen green on the screen for aerospace and defense.

How does the newly approved federal omnibus-spending plan impact military expenditures and who benefits the most? Well, Boeing (BA) gets a lot of help here.

For one thing, it looks likes the U.S. Missile Defense Agency will get $2 billion to modernize ground-based interceptors in Fort Greely, Alaska. It also appears that the U.S. Navy will receive more F/A-18 Super Hornets and the U.S. Air Force more KC-46 tankers than either one of them had requested. The Army also received funding for 17 new AH-64E Apache attack helicopters. Boeing builds all four systems.

In fact, the only problem with Boeing at this point is that China is a large customer on the civilian side, exposing BA to outsized headline risk from all of the trade-war talk. Still, the European Union is also known to be frustrated with Chinese trade practices.

What does that mean for EU-based Airbus (EADSY) ? China will need to be slow in threatening one of these two commercial-aircraft makers.

Now, let's talk Lockheed Martin (LMT) , a name that I had reduced my exposure to previously but started adding back to this past Thursday. I bought some LMT specifically because of the new spending bill, as the measure calls for Lockheed to receive orders for an additional 20 F-35 Lightning II fighter planes.

That brings the total to 90 for fiscal 2018. Lockheed will also see more business for its C-130 Super Hercules and Sikorsky UH-60 Black Hawk lines.

And while Boeing and Lockheed will benefit the most here, Northrop Grumman (NOC) , Raytheon (RTN) , United Technologies (UTX) , and General Dynamics (GD) all stand to do well either on their own products or as subcontractors on bigger systems.

Forget the FANGs and Look at FANG

So, the energy sector -- which I had considered the bane of my existence for much of 2018 -- actually offered my book a helping hand last week. A weaker dollar surely helps.

Of course, oil made a similar attempt in late January, but later reversed. My thought is that crude has to test $64 from above and survive before anyone can think about celebrating oil's buoyancy.

However, there are two new factors in place now that could propel crude -- incoming U.S. Secretary of State Mike Pompeo and new National Security Advisor John Bolton. Both men have been elevated to high levels of influence within the Trump administration, and both are replacing far more moderate predecessors.

Both are also hardliners when it comes to dealing with oil-rich Iran, making it more likely (at least to commodities traders) that America will reimpose sanctions on Tehran. I'd note that while stocks gave up a rough 6% last week, WTI picked up nearly the same amount.

While my energy focus remains on oil services, one Permian driller that's been on my radar for a bit is Diamondback Energy (FANG) . This Texas-based trades at just 13 times next year's earnings and has seen earnings growth averaging more than 200% over three quarters.

Total debt is a bit gaudy, which always makes me uncomfortable, so I'm not in the stock yet. I've also been slow to act because I'm still long Apache Corp. (APA) .

However, I took my APA stock down to tag ends on last week's surge. I now feel free to wet the beak, so let's look at FANG's chart.

Chart Of The Day: Diamondback Energy

The first thing you'll see on this chart is that Diamondback's Chaikin Money Flow (denoted with a "CMF (20)" way down below) has been ugly for nearly a two-month period: 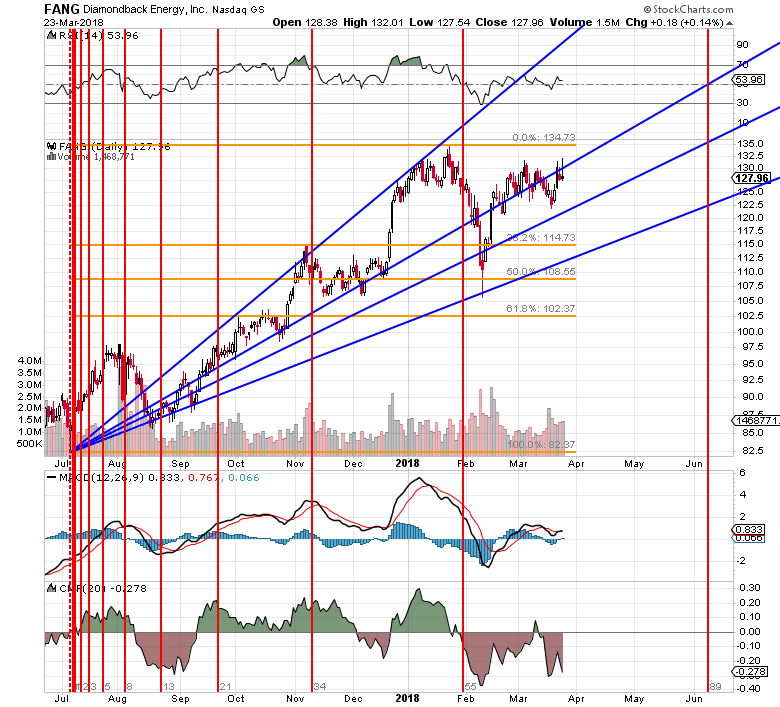 Still, with the exception of the February volatility boondoggle, this name has largely traded sideways during the period above. Using the dip seen in early July as a starting point, we can use all of the tricks that 12th century Italian mathematician Fibonacci has to offer.

First, the stock's flat Fibonacci levels seem to suggest support between $114 and $115, although nowhere else on the chart is there evidence that this would work. However, the Fibonacci Fan levels indicate past successful support on both the first and second levels should the name stay on trend.

That's a big if, but if it proves true, then Diamondback's upside would be wildly above where the stock trades now. Fibonacci time intervals also show that FANG hit a high just prior to the last three time hacks and then sold off. The next time hack seems to be coming up in early June.

Does that mean you should prepare for the stock to hit a high point by late May? That certainly isn't the stupidest idea that I've ever heard. The firm reports on May 15, by the way.

So, I'll likely take a small position in this name, but the real positive risk/reward comes in the options space. June $135 Diamondback calls went out at $5.96 on Friday. If that's all that you buy, spending 600 bucks will give you a potential $1,600 return.

And if you also write June $150 calls for nearly $2, that will reduce your initial net debit to roughly $4, although it will cap your potential gain at roughly $11.

Get an email alert each time I write an article for Real Money. Click the "+Follow" next to my byline to this article.
TAGS: Investing | U.S. Equity | ETFs | Funds | Stocks

Plus, a look at the box that the U.S. economy is in.

As the Fed tries to steer the smoking U.S. economy into a soft landing, many funds have been reduced to cyber rubble. But we can find some working -- or workable -- parts amid the rust and embers.