Color me guilty of being a die-hard Apple (AAPL) stock fanboy so far this year.

To be sure, it has been easy to take that position (actually, I did just that on Monday). Apple holds more than $246 billion in cash overseas. Some of that repatriated cash (assuming a Trump tax holiday) could be used for higher dividends (maybe a profound special dividend that enriches Apple shareholder Warren Buffett even more), stock buybacks and an epic bid for Netflix (NFLX)  . Meanwhile, sentiment on Apple's product pipeline has never been stronger, with investment banks anointing the iPhone 8 as the trigger for something called a "super cycle."

"Our analysis of App Store data and recent Asia Tour insight fuel our conviction that the iPhone 8 super cycle will be significantly larger than consensus anticipates," wrote Nomura analyst Jeffrey Kvaal on Friday. Rest assured that Kvaal's stance is shared by almost everyone on Wall Street. This damn iPhone 8 better be a game-changer, or else.

In addition to sentiment on product, Apple's stock continues to be untouchable. Shares of the tech giant have nicely outperformed the Dow Jones Industrial Average and S&P 500 during the surprise pullback this week. It's as if Apple's stock is no longer being viewed as a risky stock; instead it's seen as some form of amazing government savings bond that pays interest daily and promises a big future payoff, too. Hence, with all of these factors in place I have been steadfast in saying Apple could be the first-ever company to be valued at a $1 trillion within the next 12 months. 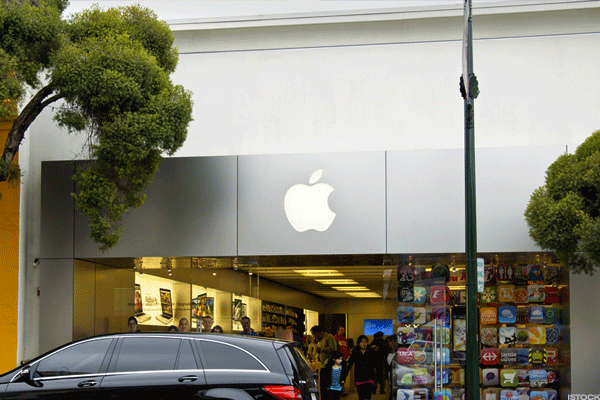 While that happening shouldn't be ruled out, it's important to remember some risks to that never occurring. That is especially so given how bullish Wall Street is right now on Apple and the stock's ascent the past year.

"It is too early to think of Apple being a $1 trillion company," tech analyst Shejal Ajmera at CrispIdea told TheStreet.

Ajmera outlines three risks that are worthy of consideration:

Apple is not seeing a drastic increase in shipments. For example, the iPhone shipped 78.3 million units for the quarter ended Dec. 31, up from 74.8 million a year ago. In effect, the iPhone 8 will have to spur blowout shipment increases for Apple to reach a $1 trillion valuation, suggests Ajmera. The price point on the iPhone 8, rumored to be $1,000, may prevent huge shipment increases.

Apple may not be able to crack the Chinese and Indian markets big-time due to the proliferation of low cost phones. For Apple to reach a $1 trillion, it may have to come up with a smartphone as cheap as those burner flip phones for sale in 7-11 to be sold in emerging markets.

While it's difficult to hop off the Apple train at the moment, the point to lighten the load may be coming.

Here's a real investment: For those high rollers out there looking to diversify their investments, you may want to buy a ticket to the Mecum auto auction in mid-May being held in Indianapolis. The first hard-top Ford (F) Mustang will go on the auction block. The 1965 Mustang has a VIN ending in 00002, meaning it comes after the 1965 Mustang convertible, with VIN ending in 00001 presently on display at The Henry Ford Museum in Dearborn, Michigan, reports Motor Authority.

About that dollar: The U.S. dollar is headed for its second weekly loss on signs the Trump administration may accomplish next to nothing this year. Dollar weakness has lit a semi bid under some large-cap multinationals such as PepsiCo (PEP) and Procter & Gamble (PG) . After seeing their sales and profits hurt last year due to dollar strength, these large-caps could certainly use relief.

Completely random: Head to TheStreet's Facebook page at 11:00 a.m. to watch a live review of Ford's new F-650 dump truck. While I won't give away entirely what I will be discussing, the company's F-650 and F-750 lines (aka super trucks) have been hot-sellers for Ford due to the recovery in the U.S. housing market and broader economy.

One company is benefiting from Twitter's failures: Owned by Match Group (MTCH) , dating app Tinder is on a hot streak when it comes to hiring former Twitter (TWTR) executives, reports CNBC. The new hires are part of a push to bring the app to more places overseas. Because, hey, who doesn't want to swipe right while on a solo trip in Italy?

Jim Cramer and the AAP team hold positions in AAPL, GOOGL, PEP for their Action Alerts PLUS Charitable Trust Portfolio. Want to be alerted before Cramer buys or sells any of these stocks? Learn more now.