"Deep into that darkness peering, long I stood there, wondering, fearing, doubting, dreaming dreams no mortal ever dared to dream before."

President Trump is not wrong. This newly pursued policy does attempt to make more even a playing field that has long been tilted against the home team. Past U.S. presidents have tried to even things up a bit. Those were weak attempts.

The kitchen gets hot rather quickly when equities get slapped around. The Nikkei 225 took an overnight beating of 4.5% largely due to related yen strength/dollar weakness. Even the base that policy such as this is intended to benefit may back away should there be an inflationary impact.

It is now that this most business-friendly administration in decades, that has proven its value as such through corporate tax cuts and deregulation, takes from the perspective of the one percent, an unfriendly turn.

Most of our favorite large-cap names have a great deal of Chinese exposure. The list of S&P 500 companies with the largest revenue exposure is simply littered with tech names, many of them from my beloved semiconductor group.

We know that the demand is there. We also know that the time has come for the "Ugly Stick" to pay this group a visit. I will not abandon the industry, but there is no doubt in my mind that quality will be separated from average. I'll stick with quality. So, let it be written.

Remember Gary Cohn's resignation as director of the National Economic Council? That was only two weeks ago. Seems eons ago, as John Bolton replaces Lt. General H.R. McMaster in the role of National Security Advisor. In between the two, the position of CIA director has also rolled over.

Volatility in leadership is never a good thing. Change can be, but volatility? No.

Our president is a populist, not an ideologue. Volatility around an ideologue might be considered less disruptive. A populist, by definition, responds to those around him or her. It is this forward-looking uncertainty that must be priced into financial markets, and as we all well know by now .... prices move faster than they ever did when actual humans did the pricing.

Did I mention John Dowd? One of the president's lawyers? Yeah. That too.

The Senate passed the spending bill in agreement with the House just a couple of hours ago. A government shutdown has been averted, as long as President Trump signs on to the deal.

While I cannot say that I am on board with this increase in deficit spending, it is our job to adapt to the environment. We can question this environment, and prepare long-term by getting long some physical gold, but short-term there will be some winners that arise.

Defense spending is slated to rise by $80 billion just this year, under the plan. That's a 15% increase. You know the names. Lockheed Martin (LMT) , Raytheon (RTN) , General Dynamics (GD) , and Northrup Grumman (NOC) may all struggle in real time with the rest of the marketplace, but there is now a very real bid under these names for their very expensive goods and services. Other industries just don't have that.

As for this group, I remain cautious on Boeing BA, as the firm's projected numbers are at least, in part, reliant on aircraft sales based in China.

Well, before I was a stupid middle-aged man from Long Island, I was a stupid teenager from Queens, NY. There was, in my youth, a patch of woods known as Cunningham Park that left a small, but largely undisturbed area a hill, precisely where the long Island Expressway intersects with the Clearview Expressway. You sort of had to risk your life to get there, but once there, nobody was going to bother you.

This spot was known to a few of us, and it became our weekend "hangout" while we were still in high school. This is far ahead of the invention of the cell phone, so we could sit there, on broken-down beach chairs, and watch the traffic speed past while discussing such important topics as sports, rock and roll, and who had to get up early for work the next day.

If only there were a place for equity traders to pass the time, away from it all... and watch the traffic speed past. Hmm. Let's go to the chart. 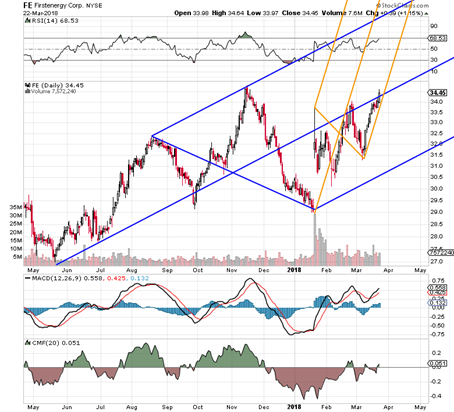 There was indeed one SPDR sector ETF that closed in the green yesterday. Flight to safety? Boosted by the unexpected rally in U.S. Treasuries? That's right, the Utilities Select Sector SPDR ETF (XLU) actually gained 0.4% on the day. The group has not done well year to date (-5.5%), but clearly the environment that provided that backdrop is not the environment we now deal with.

One of that ETF's better-performing components in Thursday's trade turned out to be FirstEnergy Corp. (FE) . Great company? I don't really think so. I mean, like with many utilities, debt levels absolutely dwarf cash levels. Your Current, and Quick ratios... don't even ask. Still, for fourth-quarter 2017, profit margins expanded significantly, as has net income. The stock trades at 14 times forward-looking earnings, and the firm pays out a quarterly dividend of $0.36, or $1.44 annually for a yield of 4.18%.

Turing to the chart, the stock has performed well throughout this winter of turbulence, and despite mostly negative Money Flow. Currently both Relative Strength as well as the daily MACD (moving average convergence divergence) offer bullish signals. Longer term, I want you to look at the two Pitchforks.

The orange pitchfork appears unsustainable. It does place most of the month of March directly upon support. The blue pitchfork, in place since the stock took a directional turn for the better last spring, puts the trend on resistance, but looking closely one might see that the line was actually pierced to the upside in Thursday's session. There is an excellent chance that the lower blue trend line, should the risk-off atmosphere persist throughout the session, become new support.

Short-Term price target: If the pajama traders are right (about the broader market), I think you'll get $35 for these within a few days. You might even see $38. If I am wrong, there is that dividend we just mentioned. The name next goes ex on May 4.

Get an email alert each time I write an article for Real Money. Click the "+Follow" next to my byline to this article.
TAGS: Investing | U.S. Equity | Transportation | Utilities | Futures | Economic Data | Earnings | China | Markets | Economy | Politics | How-to | Newsletter | Stocks

These 3 High-Dividend Canadian Stocks Are Worth a Look

We like Canadian stocks for their relatively low valuations compared to US peers.

Tap Into a Steady Dividend Stream With These 3 Water Stocks

Do You Know the Way to the Bottom in SJW?

The shares of this utility stock have turned lower from a choppy sideways pattern.