Retailer Five Below, (FIVE) , has been stuck in a sideways trading range for the past five months. FIVE is poised for a breakout soon -- but the question remains, in what direction? Let's dig into the indicators to see if we can garner any worthwhile clues.

In this daily bar chart of FIVE, below, we can see that the stock of this retailer can rally -- like in May, when it started a two-month markup. And we can see when prices are cut sharply -- from August to November. Since early December, FIVE has moved in a tighter and tighter trading range -- the highs are lower and lower, but the dips keep holding in the $38 to $37 area. Chartists would probably call this a descending, or bearish, triangle. I might also, but there a number of problems with this "triangle."

Typically, triangles -- ascending, descending and equilateral -- break out 2/3 to 3/4 of the way through the pattern. This "triangle" is nearly at it's apex and that is not typical. Second, let's look at the volume pattern and the On-Balance-Volume (OBV) line. Typically, the pace of volume slows through a triangle pattern. The slowing of volume is easy to understand, because the trading range has become tighter and tighter, the prospect of making money has shrunk and the interest of traders has moved to stocks that are trending.

We might suggest that the pace of volume slowed from the surges in early December and January, but I would say the pace of volume is heavier than in June and July when FIVE rallied. See it? Now look at the rising OBV line -- yes, it's rising.

If this was really a descending (bearish) triangle, I believe we should see the OBV line decline as sellers should be more aggressive in this pattern. Somehow, the OBV line suggests that buyers of FIVE have been more aggressive on up-days. Finally, the Moving Average Convergence Divergence (MACD) oscillator has been holding just below the zero line for the past three months and could easily move above the line for a buy signal.

In this weekly chart of FIVE, above, we get more history, but maybe not more in terms of clarity. FIVE is trading sideways, like the daily chart, below the declining 40-week moving average line. The weekly OBV line is neutral, which is different from the daily line. The MACD oscillator has been below the zero line for four months and adds little to the discussion. 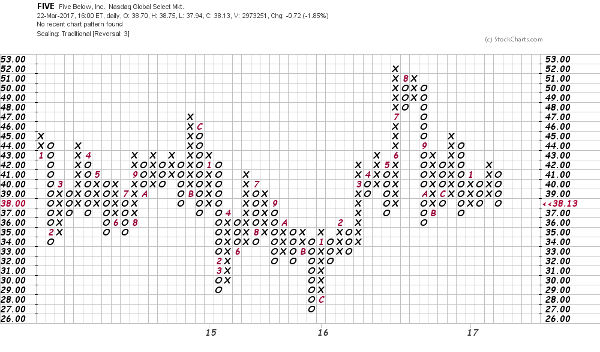 In this Point and Figure chart, above, we can see the tightening trading range, and we can identify what levels are bullish and bearish. A rally to $43 would be bullish and a break of $36 would be bearish. If we draw a horizontal line through the middle of this pattern, we find that there is more "action" in the bottom half. The assumption of this observation is that the price action is accumulation -- and it shows that there have been more tests of the downside than  the upside. If a stock cannot move lower, it should move higher.

Bottom line: Because the technical clues on FIVE's "triangle" do not really fit, I would look for an upside breakout. Aggressive traders could consider going long on a close above $41 and add on a close above $42, risking to $36.