"Work hard, stay positive, and get up early. It's the best part of the day."

The March FOMC meeting has come and gone. To the surprise of no one, the committee decided to increase the Fed Funds Rate by one quarter of one point to a target range of 1.5% to 1.75%. The accompanying statement came off, to me, as slightly confused. In the statement's first paragraph, the Fed suggests that both household spending, as well as business fixed investment have moderated from higher levels in the fourth quarter. The language also refers to economic activity as rising at a "moderate" rate, where as in December, the word used in place of moderate was the word "strong". Sounds kind of soft.

In the second paragraph however, an entirely new sentence was added to this statement. Add: "The economic outlook has strengthened in recent months." That certainly makes the committee sound much more confident than do those changes made to the first paragraph. The quarterly economic projections also paint the picture of a central bank unsure of where it should be headed on policy.

While GDP is now seen spiking a little higher in 2018, and that growth being sustained a little better in 2019, the Fed sees growth waning from 2018 on, and falling below 2% in the long run. The FOMC also, despite the statement, sees nearly no measurable increase in consumer level inflation either at the headline, nor the core going deep into the future. That said, with growth stalling after 2018, and inflation merely staying on pace, the group somehow thinks that unemployment will continue to fall into 2020, then spike sharply higher in the long run, all while they consistently increase the Fed Funds Rate. Three hikes remain their expectation for 2018, but the group somehow sees themselves hiking rather aggressively into 2020 (median expectation 3.4%), despite falling growth, and even keeled inflation.

Only time will tell, but my expectation is that these expectations are about as useful as a screen door on a submarine.

More important to your day today than the expectations of a few, and the ramblings of a middle-aged Fed watcher who wakes up in the middle of the night to write about it are two significant items. First and foremost, it appears that our legislators in Washington have agreed to a plan on government spending.

The largest benefactor seems to be defense spending, which ramps up by $80B. Domestic spending on such items as health care, child care, opioid research, veterans' programs, and infrastructure improvements will see increased spending of roughly $63B. The wall on the Mexican border? Only $1.57B appears to be earmarked for such a project, far less than the president had requested.

The bottom line is that there is enough here for both parties to claim political victories, but we all know that this plan in fiscally irresponsible. Not that this irresponsibility is new news. The $1.3T spending limit was already agreed upon. The only news here is how that total is to be sliced and portioned out. The bill contains 2,232 pages. Both houses have to pass this bill by 12:01 am Saturday morning. Think many of them will really read the bill? Me neither.

Remember, just one senator is able to slow down an entire process. We've seen it done, and I am sure that we'll hear from the fiscal conservatives on this matter over the next couple of days, and before you become impatient with those fiscal conservatives.... they're not wrong.

Expectations are also that we'll hear from the White House today regarding somewhere between $30B and $50B in punitive measures that might be taken versus China in addition to the already announced tariffs on steel and aluminum. This has a lot to do with why equity index futures are lower this morning. In response, it is said that China is considering a "proportional" (China's word) reply that would target soybeans, sorghum, and live hogs.

It is also said that China would be willing to allow greater outside investment in financial firms to include insurance companies. How I see that is that there is clearly room for negotiation. As with the recently made exceptions to the steel and aluminum tariffs that were made for our North American neighbors, there is always room for deal making. That's why President Trump comes out swinging, and President Xi seems to understand this well.

We will know more shortly, and I am reasonably sure that both sides will develop their positions from where they are first reported. Expect China, as with the EU in response to the earlier tariffs to threaten tariffs of their own that would in effect, target states where President Trump's electoral base would feel the most impact. Game on.

Today's news looks, at least this morning, to likely cause a risk-off reaction. That typically puts some high priced tech names in a precarious spot. Is what you see before you a falling knife to be avoided, or is what you see before you merely opportunity knocking? This morning, I will contrast two stocks, both high priced in dollar terms, yet seemingly, at least to this guy... headed in different directions over the longer term. Both will likely be somewhat adversely impacted by trade troubles with China.

Lam Research (LRCX) services and manufactures wafers for the semi-conductor industry, and counts on revenue more from South Korea and Taiwan, than it does mainland China, but also gains more revenue from China than the United States. Just yesterday, Bank of America Merrill Lynch initiated the name with a Buy rating, and placed upon it a 305 price target. Cloud computing and artificial intelligence were named as drivers of growth in secular memory demand, and the stock was names a top pick by analyst Vivek Arya. This stock was my portfolio's best name in 2017, and remains one of my favorites.

Two weeks ago, the firm announced a more than doubling of the shareholder dividend, and a $2B boost to the share repurchase program. 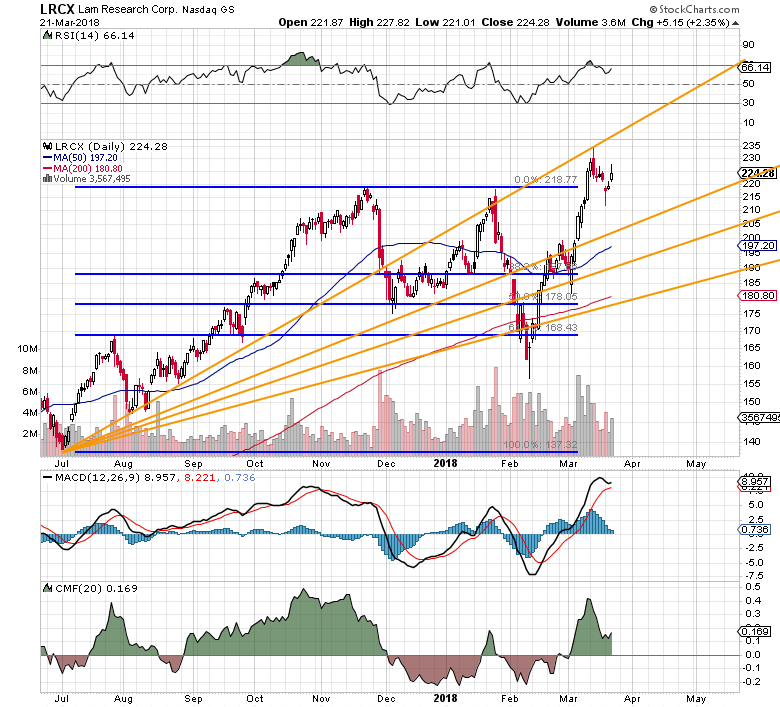 One is immediately drawn to the rising trend line that provided support throughout most of 2017. The line, though now resistance, continues to rise. One is also drawn to the first line of support illustrated by the Fibonacci Fan model. That line, lost in the winter correction had been short-term resistance itself, before breaking, and now may be looked at as re-established support.

I would expect this morning to see Relative Strength and Money Flow ease from superior levels after the daily MACD suffers a bearish cross-over... probably on, or shortly after the opening bell in New York. Volume, mind you over the recent charge higher in share price, has been exceptional. What do I think?

This chart supports what the Bank of America analyst was thinking. I think 305 is aggressive, but 265 by summer certainly is realistic. Do I jump in right here? No. I need more of a discount to add to my long. However, I see prices anywhere between 205 and 215 prior to May 1. I likely add to this name trading at just 13 times next year's earnings. LRCX reports on April 25.

First off, I am flat Tesla (TSLA) , and have never been long the name. This stock, over time, has been my most often shorted stock. These short positions have ended both victoriously, and at other times...far from victoriously. Do I have a mental bias? Perhaps. Keep that in mind.

Tesla shareholders easily approved a complex pay package for CEO Elon Musk that appears grotesque when all one sees is the headline. The plan grants Musk $2.6B in stock options that could net the CEO more than $55B (yes, these are B's not M's) over a decade. There is a catch. All of this compensation is tied to performance, and will be doled out in 12 tranches over 10 years. Tesla will have to grow in market cap more than tenfold. Each of these tranches is tied to a target. If what I am reading is correct, then if one target is missed, Musk receives no compensation. Interesting. Seems farcical. Let's go to the chart. 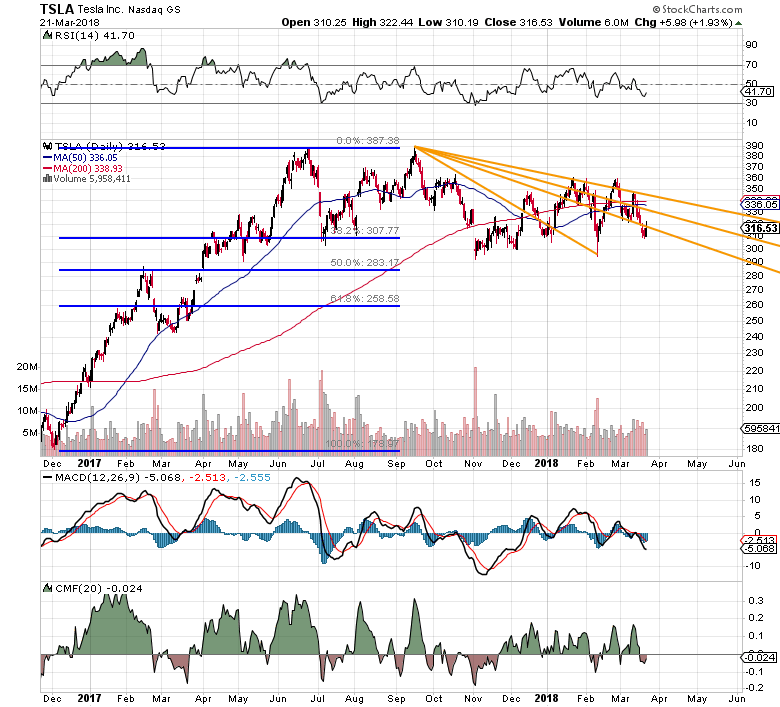 As you can see, the name stalled late last Spring, and has weakened since, though gradually. The stock has regularly entered and left, and then re-entered bear market territory for nearly half a year now. Unlike the above profiled company, TSLA trades at 135 times forward earnings. Yes, lines of production have obviously improved, but the name can hardly be called cheap.

The stock has found some jagged support in between a 38.2%% and a 50.0% re-tracement of the December 2016 through mid-2017 move. Once again, we'll refer to the Fibonacci Fan, as the recent trend illustrates a series of lower highs. The central line indicates to me some resistance at last night's closing price. A failure there, would in my opinion allow for the name to gravitate toward the trend line, where it's next challenge would come in the 295ish area.

Fans of the stock almost caught some relief as the 50 day SMA closed in on the 200 day SMA. A golden cross there would have triggered some algorithmic traders to take the stock higher. Without that, my opinion is that the name can be shorted here small. Not large, because this is a dangerous stock. Those looking for a buying opportunity might get away with waiting until mid-April on this stock. TSLA reports on May 9.

Get an email alert each time I write an article for Real Money. Click the "+Follow" next to my byline to this article.
TAGS: Investing | U.S. Equity | Technology | Transportation | China | Markets | Economy | Politics | Stocks