The financials -- a.k.a. the banks -- are a key sector of the stock market, both here and across the pond, so it pays to pay attention to their price movements. Many market watchers consider the financials the "front end" of the market. What is the front end? Banks tend to turn up (and down) before other sectors. Materials and energy names tend to turn up later in the cycle.

So this Wednesday morning, let's take a look at the technical clues on the yield of the U.S. 10-year Treasury. The direction of the 10-year is kind of a shorthand for the net interest margin, or NIM, that is an important measure of a bank's profitability. And we want to look at JPMorgan Chase  (JPM) . Of course, we'll pay a visit to some of the big names overseas.

In this chart of the yield on the 10-year, below, you should be able to see that the yield turned up, or bottomed, in late June/early July, and the yield moved up even sharper/faster in November and December.

Investors should have seen this rise in yields coming, with strong economic numbers and increased anticipation that the Fed would raise interest rates. Rates got up to 2.60% and have been moving sideways for the past three months or so -- between 2.60% and 2.40%.

The key question is where yields are headed. Is the 10-year going down to 2.25% or 2.00% again, because the prospects for or perception of U.S. economic growth are being shifted downward? Has the stock market rally run into trouble, and will there be a shift out of stocks and into bonds, which pay more than the average yield on the S&P 500 now?

There are lots of questions, but the 20-day momentum study in the lower panel does not suggest significant weakness, as momentum readings have been making higher lows. If asked where I think the next 50 basis points move in the 10-year is heading -- up or down -- I would go with up. A neural network program I follow (www.pfr.com) is anticipating a "turn" in bonds around Mar. 30, so I will be watching closely.

In this daily bar chart of JPM, above, we can see how the movement in JPM mirrored the 10-year yields. JPM turned up, or made its low, in late June. Prices moved gradually higher over the next four months and then soared in November and December, as election promises gained clarity. The slopes of the 50-day moving average and the 200-day moving average have been positive since September. JPM did close below the 50-day average yesterday but we did not see increased selling ahead of this minor sell signal.

The On-Balance-Volume (OBV) line moved up strongly with the price action since November, telling us that buyers of JPM have been aggressive. The OBV line leveled off a little this month, but it does not show a significant bearish divergence. In the lower panel is the 12-day momentum study, which shows slowing momentum from November as the pace of the rally slowed.

In this weekly chart of JPM, we do not see a large pattern of distribution or a top formation to worry about. That is not to say that prices cannot decline, it means that we do not see the normal selling and distribution that comes at a meaningful top.

JPM is still above the rising 40-week moving average line. The weekly OBV line only shows a dip for this month so far. The Moving Average Convergence Divergence (MACD) oscillator has turned flat and crossed to a liquidate-longs or take-profits sell signal. A sell on the MACD when it is above the zero line is not a sell short signal, as prices are still in an uptrend. 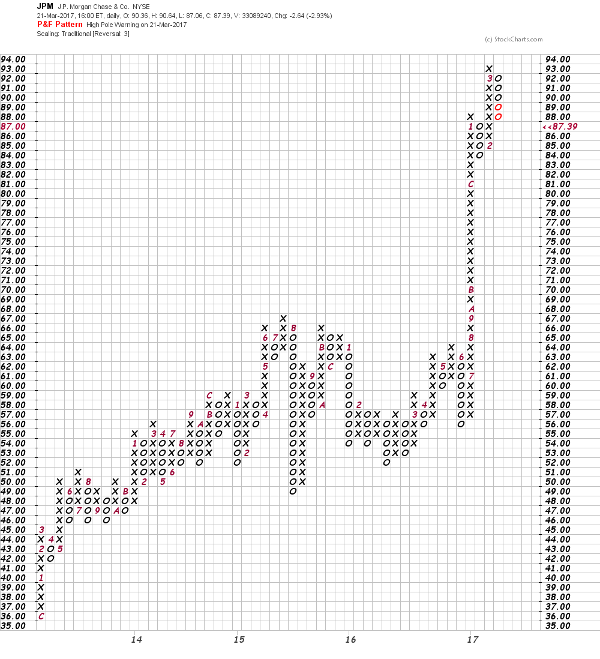 In this Point and Figure chart of JPM, above, we only focus on the price action, no indicators. JPM is in a down column with the "Os," and could decline to $84 (actually $83.01) without a downside breakout.

Bottom line: We will monitor the movement of the 10-year and JPM and the other money-center banks going forward, as this dip could be a "shot across the bow." But at this current juncture we are not overly bearish.