Deutsche Bank (DB) has had its share of fundamental problems in the past year, but it has still managed to rally from $10 to over $18 from late September to late January. This was a significant percentage move in a relatively short period of time for the German bank's ADR, and prices have been moving sideways in the past two months as some investors have taken profits.

DB could well continue with its sideways price action, building a bigger base for a larger rally in the future. Considering its large decline in 2014 and 2015, a bigger base is anticipated and expected.

In this daily bar chart of DB, above, we can see that the low on DB did not occur until late September, unlike many banks that bottomed in late June/early July. Volume was extremely heavy at the September nadir, in what could easily be called a selling climax. There is a bullish golden cross of the 50-day moving average line and the 200-day moving average line in mid-December. In the past few weeks, DB has traded around the now flat 50-day average.

The On-Balance-Volume (OBV) line moved up steadily with prices from October through February, but it has recently softened a little. A rising OBV line is a sign of more aggressive buying, and a declining OBV line signals that the volume of trading has become heavier on down days. Heavier volume on a down day is a sign that traders what to get out of longs. The trend-following Moving Average Convergence Divergence (MACD) oscillator recently moved below the zero line for an outright sell signal.

In this weekly chart of DB, above, we can see what could be a developing inverse head and shoulders bottom pattern. The left shoulder is in early 2016 at $14. The head is at $10 in September and the right shoulder is still evolving. Prices are above the rising 40-week moving average line.

The weekly OBV line made new highs for the move up from the September low and is more bullish than the daily chart. The MACD oscillator is above the zero line on this timeframe, but the two averages that make up this indicator have narrowed and could cross to a liquidate longs sell signal. 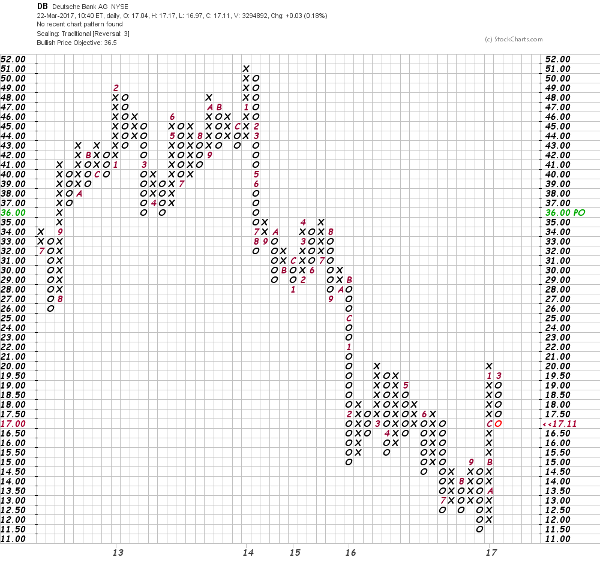 In this longer-term Point and Figure chart of DB, above, we can see how prices broke a downtrend that was in force from 2014. Prices should have support above the $15.50 breakout. After further consolidation or sideways price action, this chart suggests a potential upside price objective of $36.

Bottom line: DB might soften towards $15 in the weeks ahead or it may just stay in the $16 to $19 range. We'll see. At some point, a close above $19 should restart the bulls.

Get an email alert each time I write an article for Real Money. Click the "+Follow" next to my byline to this article.
TAGS: Investing | U.S. Equity | Financial Services | Markets | How-to | Stocks