Credit Suisse Group (CS) made a significant rally from an early July low to a January peak -- from $10 to $16. For the past four months prices have been in a sideways or neutral trend. Short-term traders are trying to figure out whether they should stay or go on the banks.

In this daily bar chart of CS, below, we can see a low in early July and a small "retest" in early August. CS moved up as the yield in the U.S. 10-year moved up (see our story on JPM from earlier today). The slope of the 50-day moving average line turned positive in early September and it crossed above the 200-day moving average line in November for a bullish golden cross. The rally in CS stalled in January and those levels have not been breached. CS has crossed above and below the now flat 50-day average.

The On-Balance-Volume (OBV) line made its low in June as prices bottomed and rose to a December high. A rising OBV line tells you that buyers are more aggressive with the volume of trading being heavier on days when CS has closed higher and lighter on down days. The OBV line has drifted sideways the past three months as prices have been stalled. The Moving Average Convergence Divergence (MACD) oscillator is neutral at this point.

In this weekly chart of CS, below, going back three years we can see the major markdown since 2014 from $33 to $10 in two years. CS is above the rising 40-week moving average line and the MACD oscillator on this timeframe is above the zero line, but the weekly OBV line suggests that selling a liquidation has been aggressive the past four months.

In this Point and Figure chart of CS, below, we can see the decline going back to the peaks made in 2010. The pattern of lower lows and lower highs is still intact and we should see support for CS at $14 based on this chart. Is prices move up to $16.50 the uptrend is restarted and $20 becomes the price objective. 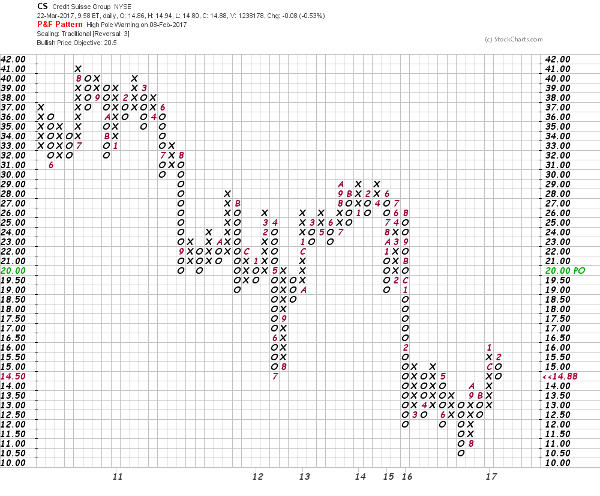 Bottom line: Can CS decline? Absolutely. Will CS suffer a major decline? No, it's too late for that but we are likely to see more sideways price action in the weeks ahead.

Wells Fargo's Quant Downgrade Signals the Stagecoach May Be Slowing Down

This is a good time to check out the charts of WFC.

The shares have made a good run since early April.

Here's how to play BCO stock.

Europe's biggest bank, HSBC, is in an impossible political situation, caught between London and Hong Kong. South Africa's TymeBank will have it easier expanding into the Philippines.

Now that prices are within striking distance of our target, let's review the charts.