"There cannot be a crisis next week. My schedule is already full."

The policy statement made by the Federal Open Market Committee this afternoon will be the story of the markets today. We'll all look more toward forward guidance and the press conference than we will the expected increase for the fed funds rate.

Much will be made of the dot plot. Much will be made of Fed Chair Jerome Powell's understanding of the relationship between unemployment, wages, and inflation at the press conference. Markets will largely be quiet until late in the day. We get that. I think most of us, by now, understand this condition.

There are however, other monsters stalking this marketplace, and those monsters may just be getting a pass right now in terms of both media coverage, and market impact.

The most recent of a string of stop-gap government funding measures expires this Friday (Actually 12:01 a.m. Saturday morning). Yes, the Fed is the bigger story today. We have covered that story up, down and sideways. This, however, is a story that should disappear periodically, and not come up every few weeks.

Last night, we heard that our legislators were close to a deal that would fund the government at least until October, which is when the fiscal year rolls over. We already have a deal in place for the year's spending to come to $1.3 trillion. It's the slicing and the dicing that divides.

The border wall? A new rail tunnel beneath the Hudson River? Immigration? Infrastructure? Defense (trade idea below)? It's as if the members of Congress start from scratch every few weeks, and pretend that all is solved every time that they pass something temporary just to keep the doors open, and the lights on. In fact, Rep. Nancy Pelosi (D-Cal), and Sen. John Cornyn (R-Tx) have both already raised the possibility of doing so again this week, just to avoid the federal government's third embarrassing partial shutdown of the calendar year.

The plan had the House of Representatives voting on the entirety of the proposal by Thursday, but that plan was put in place with the understanding that the text of the bill was to be completed by Tuesday night. It was not. Any delays from here, mean a later potential passage, as well as a later arrival in the Senate. The Senate might then slow things down themselves.

This story may weigh on the markets as we approach week's end if this crew does not look toward getting their act together after markets digest the Fed decision Wednesday afternoon.

Monster Under the Bed

Three-month dollar LIBOR stands at 2.25%. This is the highest this rate has gone since November 2008, and is up from 2.025% since Friday, March 2. That's fast. How much does this matter to financial markets? To the economy? How much does the much-ballyhooed gap between the three-month LIBOR rate for dollars, and the overnight indexed swap (OIS) rate matter right now? Is this still the "go to" measure of short-term funding risk?

Technically speaking... maybe not. It's easy to blame the parabolic widening of this spread on the sheer size of Treasury bill issuance since worries over the U.S. debt ceiling were put to bed. Has repatriated cash, under the re-written U.S. tax code also reduced corporate America's need to reach for short-term funding? Likely.

If this is indeed the case then it stands to reason that this is less of a liquidity concern than it might otherwise be. As a retail investor, I would not change anything I was doing for a sentient reason based on this, but I am certainly going to keep this in my periphery.

That said, if there is equity risk to be associated with this relationship, and there might not be in this evolving environment, it won't be to the upside. Not trying to scare, just trying to increase retail level cognizance.

Word is that the President Trump will release a plan tomorrow aimed at China that will include more than $30 billion worth of tariffs on imports from the Asian nation. The obvious intention here is to try to make the environment more difficult for China to gain advanced technology either by investing directly in U.S. companies, or by requiring U.S. companies to surrender certain intellectual property rights to Chinese competitors just to be allowed to compete for the Chinese consumer.

The administration intends to take this slowly, and will look for opinion from impacted U.S. firms before implementing in the real world, any part of the plan. Perhaps, the president is waving a stick, looking for something conciliatory from the Chinese side. That would fit with the administration's behavior on such matters in the recent past.

How far the U.S. government is willing to go here truly is an unknown. A lot may depend on how much support the administration gets from other nations known to be affected by Chinese trade practices, and how the Chinese government reacts. Obviously, Japan would be of interest here. The support of the European Union would also be important.

Some people might ask why a nation seeking simple reciprocity in trade is made out to be the villain. I might be (I am) among them.

How interesting is it that word spills out that Amazon (AMZN) is considering making a bid in bankruptcy court for certain Toys R Us locations? Geoffrey lives? Not exactly. After acquiring the Whole Foods grocer and the 450 locations that came with it, it now appears that the leader in e-commerce, also known as the "Death Star" would like to increase the firm's bricks-and-mortar footprint.

After already aligning itself with non-mall retailer Kohl's (KSS) in order to showcase Amazon's own products such as the Echo line of home-based devices, the firm appears ready to broaden the effort through the use of vacant retail space that might also be used as distribution points in order to further decrease lag time between the time a consumer places an order, and the time an already ordered good arrives at the consumer's doorstep. It never stops. 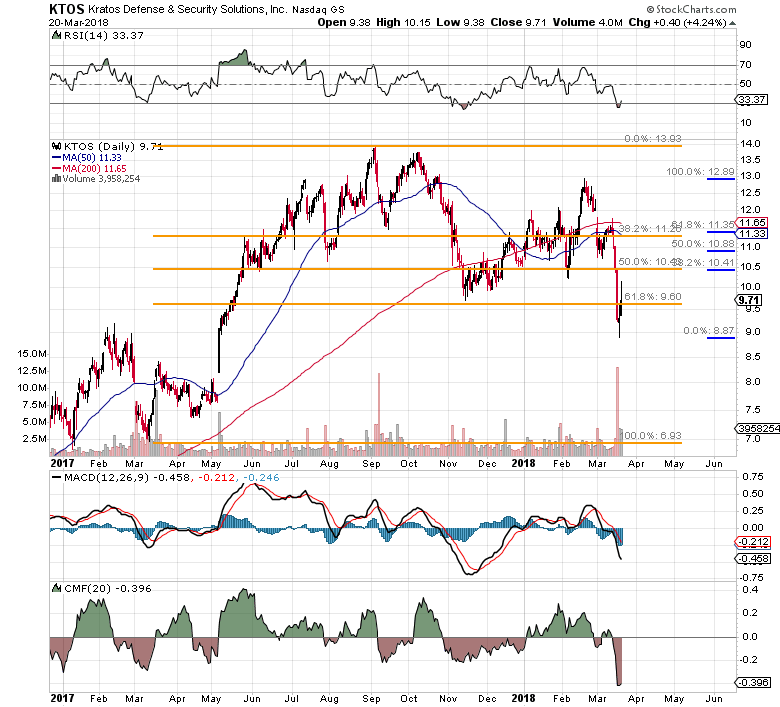 A number of emails and tweets have been coming in regarding Kratos Defense & Security (KTOS) since it started falling out of bed. Perhaps because I am a known long. Perhaps because I have backed the stock in the past on more than one national financial news network. That does not mean that I don't trade around my core position. However, you don't care about that. I understand. You contact me because you are nervous.

Last week noted short-seller Ben Axler of Spruce Point Capital made his case for a 40% to 70% decline in the share price of KTOS. The stock was trading in the area of $10.25 at the time. Axler is good, by the way. No dope. His case is that the firm does not deserve it's 28 times forward looking earnings valuation. I think the Kratos is heading in the right direction, however. Together, let's take a look.

Fundamentally, Kratos reported fourth-quarter earnings in late February where it beat consensus for both earnings per share and revenue. From Q3 2016 through Q3 2017, profit margin widened to 25% from 17%, cash on hand (and cash equivalents) grew from minuscule to $231 million, and total debt declined to $369 million from $445 million.

The company's current ratio runs at 2.49, and the quick ratio (less inventories) stands at nearly the same level (2.43). What this means is that Kratos, while maybe not such an efficient debt manager, should have no problem whatsoever in meeting short-to medium- term obligations.

The firm has landed $270 million in Department of Defense contracts over recent months, and has received permission form the State Department to market its MAKO drones to U.S. allies.

Looking at the chart, one easily sees the impact that Axler had on both the share price and the trading volume on the day that he made his case -- not to mention Relative Strength, and Money Flow.

The $9.60 area is important from a technical perspective as that spot stands as a 61.8% re-tracement of the 2017 range. Since last week, the spot has been regained but just barely, and remains pivotal. I have added to my long position on this weakness.

November 12.50 KTOS calls went out last night at $1.00. The stock itself closed last night at $9.71. I will use these prices for my example, though they will obviously fluctuate between now and the time you read this. A retail investor who buys 100 shares of the equity, and writes a covered November 12.50 call against the position will have reduced his or her basis on the trade to 8.71. Simple? yes, but extremely smart people tell me all the time that they are not ready for options, so bear with me.

Do you understand that this allows this investor to, in essence, purchase the stock at a 10.3% discount, while not increasing the downside risk one bit. The only risk associated with writing a covered call is the limitation of profit. In this example that means that any rise in the stock above $12.50 by November will not be yours to keep. What would be yours to keep if the stock went higher would be everything between $8.71 and $12.50. How does 43.5% on your money sound? Good enough? Want to go out to January on this? That one last paid $1.25.

It appears that if the stock does break down, there is some legacy support in the $8.50 area. First-line resistance on a technical bounce shows up around $10.40. Just remember if you implement this trade, and then sell the equity, you also need to cover the call option that you would now be short in order to keep the risk in check.