Over the last few years, Tesla's (TSLA) market cap, revenue and cash burn have all skyrocketed, as markets have given an enthusiastic thumbs-up to a strategy under which Elon Musk's company has aggressively raised capital to finance giant investments meant to aid its goal of becoming a large-scale EV, solar system and battery supplier.

Musk's eye-popping new pay plan -- just approved by Tesla shareholders in spite of opposition from shareholder advisory firms ISS and Glass Lewis -- gives the celebrity Tesla founder and CEO major incentives to keep pursuing this strategy, and to wager that Wall Street will continue to reward it.

The pay plan, originally floated in January, features no salary, cash bonuses or guaranteed stock awards.
milestones. The potential awards are broken up into 12 tranches that each contain 1.69 million shares, or 1% of Tesla's outstanding shares as of January. 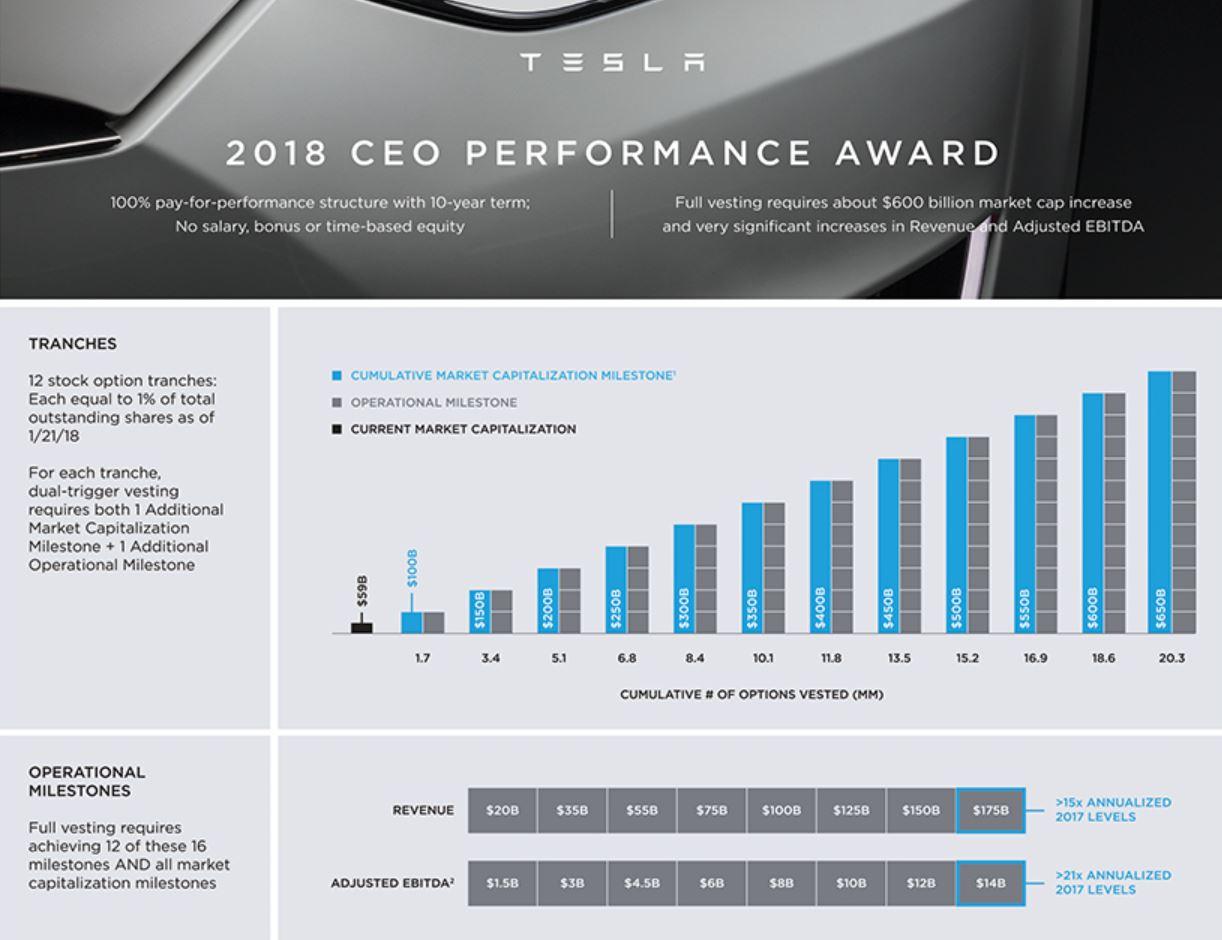 The first 1.69 million stock options, currently worth $535 million, will vest if Tesla, which currently sports a $53 billion market cap, achieves a $100 billion market cap and either $20 billion in annual revenue or $1.5 billion in annual adjusted EBITDA. This market cap milestone, like all the others, requires Tesla to maintain the milestone valuation for 6 months on a trailing-average basis, at least unless there's a change of control.

For the 12th and final tranche to vest, Tesla would need to achieve a $650 billion market cap and 12 revenue/EBITDA milestones. If 6 of each were achieved, this would translate into revenue of $125 billion and adjusted EBITDA of $10 billion. Under such circumstances, Musk would have been granted 20.3 million stock options. At present levels, those options would be worth $6.4 billion. If Tesla was to have a $650 billion market cap, they would naturally be worth a lot more.

At first glance, the plan does -- as some of its defenders put it -- align Musk's financial incentives with those of Tesla shareholders. If Tesla's top line, bottom line and stock price all see major improvements, then Musk will be richly rewarded. If they don't, then he gets nothing. But there are a few qualifiers. Perhaps the biggest one: Following the initial revenue and adjusted EBITDA milestones, EBITDA milestones appear much easier to achieve than revenue milestones.

Why do analysts expect Tesla's adjusted EBITDA to grow so quickly? Because achieving positive adjusted EBITDA is a far cry from achieving positive free cash flow (FCF) or GAAP profits, since it excludes (among other things) interest expenses on debt, depreciation expenses on capital investments and stock compensation expenses. This especially holds for a company like Tesla, which ended 2017 with $10.4 billion in debt/capital leases and expects capex to rise slightly this year for a steep 2017 level of $3.4 billion to help pay for its giant Model 3 production ramp.

Just as importantly, if Tesla embarks on a strategy aimed at growing revenue much faster than analysts expect it to by raising funds to make huge new capital investments, the additional depreciation expense growth caused by this strategy (and interest expense growth, if Tesla raises money by issuing debt) won't hurt its adjusted EBITDA. Rather, EBITDA will likely get a boost from all that additional revenue.

The counterargument to this: If Tesla's market cap soars, as it needs to in order for Musk's option tranches to vest, Tesla investors shouldn't care if the company is still burning cash. But between how high the market cap and revenue milestones are, and how achievable the EBITDA milestones look over the near-to-intermediate term, the pay plan does give Musk an incentive to pursue a high-risk, growth-focused strategy that may or may not ultimately be rewarded by Wall Street.

Moreover, as Bloomberg's Liam Denning points out, Musk's pay plan actually serves as an incentive to raise cash (and dilute existing shareholders) via stock offerings, since doing so would increase Tesla's share count and market cap. Throw in the additional revenue and EBITDA Tesla might get from products sold with the help of capital investments made using this raised capital, and the move serves Musk's interests (though not necessarily those of Tesla shareholders) in multiple respects.

The pay plan could also create a disconnect between Musk's interests and those of Tesla investors when it comes to M&A. If, say, Apple (AAPL)  was to offer $85 billion (a 60% premium to Tesla's current valuation) tomorrow to buy Tesla, Musk would be incentivized to turn them down, since none of his option tranches would vest at that level.

On the flip side, the pay plan arguably gives Musk an incentive to pursue revenue and EBITDA-boosting acquisitions. Though the plan comes with a provision increasing market cap, revenue and EBITDA milestones to account for any increase in those figures caused by a large acquisition, this doesn't account for any revenue or EBITDA growth produced by the acquired company following the deal's closing. Thus if Tesla bought a company doing $2 billion in annual sales and expected to grow its revenue 50% in its first year following the purchase, that extra billion in sales would count towards the achievement of the revenue milestones.

It doesn't necessarily follow, of course, that Musk will let such incentives affect how he runs Tesla. Certainly, it's hard for long-time Tesla investors to complain about how shares have performed under Musk's leadership in recent years. But investors should keep in mind that the pay plan incentivizes some behavior that might not cleanly mesh with the interests of Tesla shareholders.

Dividend Aristocrats McDonald's and Cintas Corp. will continue to offer a solid payout as life reaches a new normal.

A look at those stocks likely to lead in the short- and long-term, the headlines out of China and Hong Kong, and the import of fiscal stimulus.

Seven of the eight indices we follow are in short-term uptrends.

Target and Walmart have become online grocery destinations, which could be an advantage even after the pandemic loses steam.