BP (BP) is another top stock that trades in London and as an ADR here at the NYSE across the street. BP has been in a downtrend for several years, but 2016 may have been its turnaround year in a new bull.

Let's check the latest charts and indicators for clues.

In this daily bar chart of BP, above, we can see prices have been in a rough uptrend the past 12 months. I call this a rough uptrend because there isn't one simple trend line we could draw, but we still see higher lows and higher highs, which is the simple definition of an uptrend. The February/March lows are higher than the November lows but prices are below the declining 50-day moving average line and below the rising 200-day average. The On-Balance-Volume (OBV) line softened in January and February but looks like it is firming again this month. The Moving Average Convergence Divergence (MACD) oscillator crossed below the zero line for a cover-shorts buy signal.

In this weekly chart of BP, we can see part of the previous bear market. In this three-year chart, BP weakens from 2014 to early 2016. Since the winter of 2015-16, prices have slowly improved. The slope of the 40-week moving average line is now positive, but prices have been trading below it in recent weeks. Since March 2016, the strength in the OBV line has been impressive. The OBV line has made a strong accounting of itself rising to a January 2017 peak (for now). The weekly MACD oscillator signaled an outright go-long buy in July but is back to the zero line again. 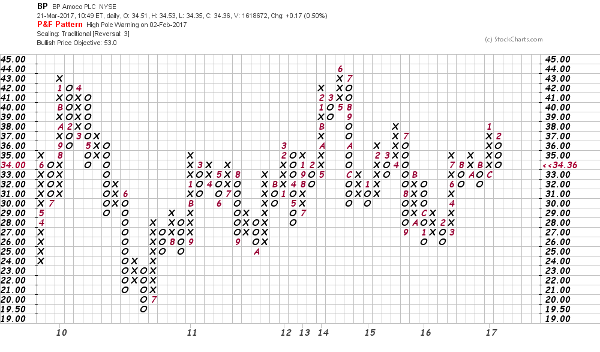 This long-term Point and Figure chart of BP, above, shows a very large base pattern. A rally up to $39 would be a breakout on this chart and yield an upside price target of $53.

Bottom line: A bullish price chart with a 7% dividend sounds like a winning combination today. Traders could go long BP on a close above $35 risking to $32.50. Traders could add to longs at $39.

3 Canadian Stocks With Higher Dividend Yields Than Their U.S. Counterparts

Sometimes it pays to look north of the border for companies with great dividends.

It definitely is starting to feel like some of the beaten-down groups are starting to bottom.