"He who knows when he can fight and when he cannot will be victorious." -- Sun Tzu

Anyone who's ever pursued a higher level of physical conditioning knows just how awful it feels to get started. The calloused hands, the achy quadriceps, the shock to the system that's broader than what's merely physical.

This is how many traders and investors are probably starting to feel about the market's new condition as they're forced to trade around volatility. All of us knew that this kind of environment was likely in the offing, and all of us know that there are far greater beasts in the forest than what we're now dealing with.

The good news? Nearly two months into this new environment after 15 months of nearly zero market volatility and years of an artificially induced bull market, our minds are adapting.

The sharp stab of pain once caused by red ink on the blotter now seems to be an understandable condition of what it is we do. In the end, that will be a good thing.

The Nasdaq Composite gave up 1.8% on Monday. Internet stocks led the way lower, while the semis took their share of the heat as well.

The S&P 500 also retreated to the tune of 1.4%. Much will be made of the SPX giving up the 50-day simple moving average, but anyone who bothers to look at a chart will know that the 50-day SMA had provided more resistance than support for almost six weeks. But hey, why ruin a good narrative?

As for tech stocks, the assault came from multiple avenues of approach, including:

As you probably know, data-mining firm Cambridge Analytica ran into trouble with Facebook (FB) because 250,000 folks voluntarily surrendered their information to strangers, and that put some 50 million others associated with these people at risk.

But there was more to Monday's tech sell-off than just that. All of the FANGs -- Facebook, Amazon (AMZN) , Netflix (NFLX) and Google/Alphabet (GOOG) , (GOOGL) -- had problems.

All four will face regulatory scrutiny both here and abroad regarding customer security. The FANGs will also face the added burden of a threatened European Union 3% gross revenue tax that's becoming more probable thanks to President Trump's protectionist path. Lastly, research firm eMarketer forecast Monday that Google and Facebook will lose some of their dominant U.S. digital-ad market share to the likes of Amazon.

Making matters worse for many of our favorite chip stocks (and those who supply and service them), an Uber sell-driving car allegedly killed a pedestrian in Arizona on Monday.

Self-driving autos are a key demand driver for the chip group, as well as for Waymo, the Alphabet spinoff that planned to offer a commercial car-hailing service in Phoenix at some point this year. Does this event slow down these efforts? My thought is that it likely will.

The final pressure on the tech sector came from Apple, for not one but two reasons. First, a report made the rounds that Apple is designing its own microLED display screens in private, away from the company's own suppliers. On top of that, Nomura Instinet cut its projection for 2018 iPhone sale from slightly above consensus to slightly below.

Meanwhile, Back at the Fed

The Federal Open Market Committee begins its two-day huddle on Tuesday, with a policy announcement expected Wednesday afternoon. Chicago futures traders are pricing in a nearly 95% probably of a quarter-point rate hike, but there's much, much more going on than that.

First, the three-month LIBOR has been on the move, increasing short-term borrowing costs. My colleague Peter Tchir noted Monday on our sister site Income Seeker that the Federal Reserve "seems extremely focused on raising rates in March, and on sending a hawkish message just as every major bank is reducing its estimates for first quarter U.S. GDP growth. It might be too early to say 'policy mistake,' but this should be in the back of your mind."

Also consider the Fed's balance-sheet management. The central bank's quantitative-tightening program started to unwind the Fed's massive $4.46 trillion balance sheet back in October. rolling off $67 billion as of Feb. 28. This "reverse tapering" will rise to $30 billion a month starting in April.

This shouldn't scare you, but understand what you're up against as an investor and adjust your expectations accordingly. Your only friends are quarterly earnings growth, reduced corporate taxes and corporate cash balances that might or might not be enhanced by overseas-profit repatriation. Economic growth might or might not be there once the rest of the planet moves toward tighter monetary policy.

New Fed Chairman Jerome Powell will step to the plate on Wednesday for his first post-FOMC press conference, armed with a shiny new set of economic projections.

His forward guidance will undoubtedly impact where debt and equities finish the week. Will the Fed's "dot plots" show a fourth rate hike sometime in 2018 (or a double whammy somewhere along the way)?

I think even more important will be the way in which Powell presents the FOMC's views on the inflationary pressures that wages and personal consumption are putting on the U.S. economy. In other words, how does Powell -- who's not a classically trained economist (which might be a good thing) -- see the Phillips Curve? That will matter.

Charts Of The Day

Fortunately, you can see where the index did find some help close to a 31.8% retracement of the entire move from the S&P 500's correctional winter lows through its early March high: 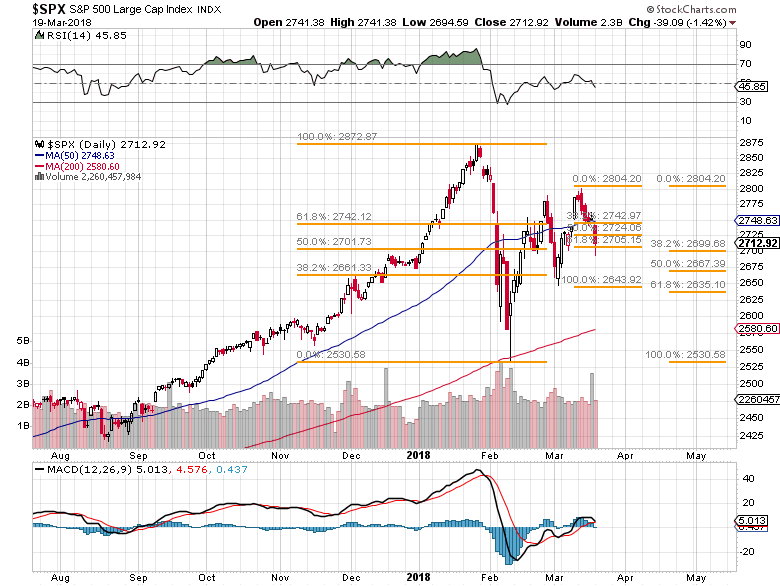 And while the names below all took a beating on Monday, do their charts look broken to you? Not to me. 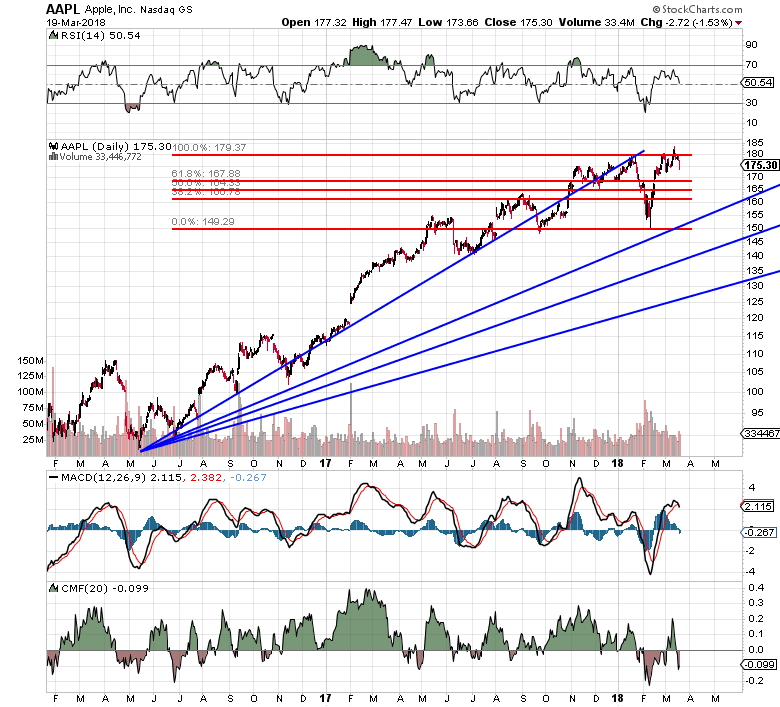 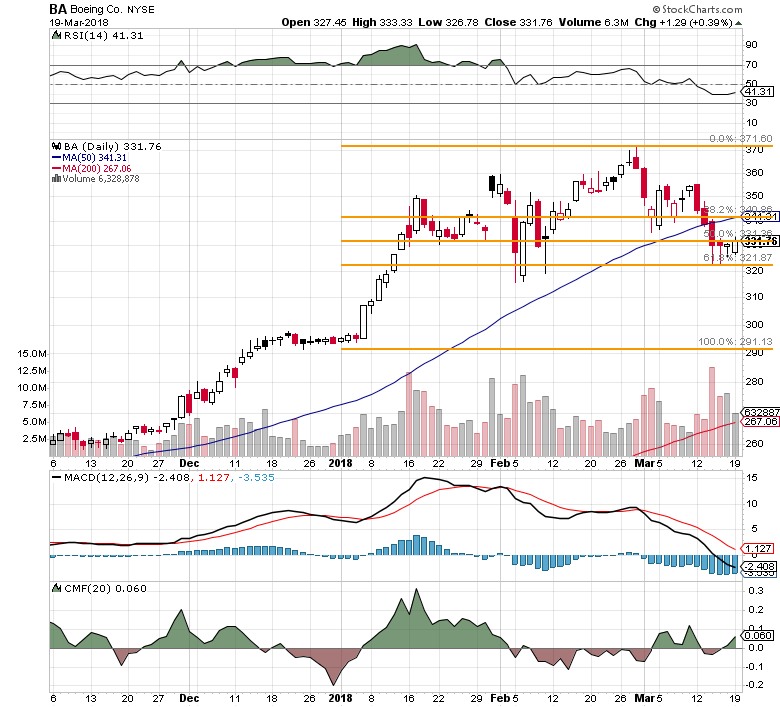 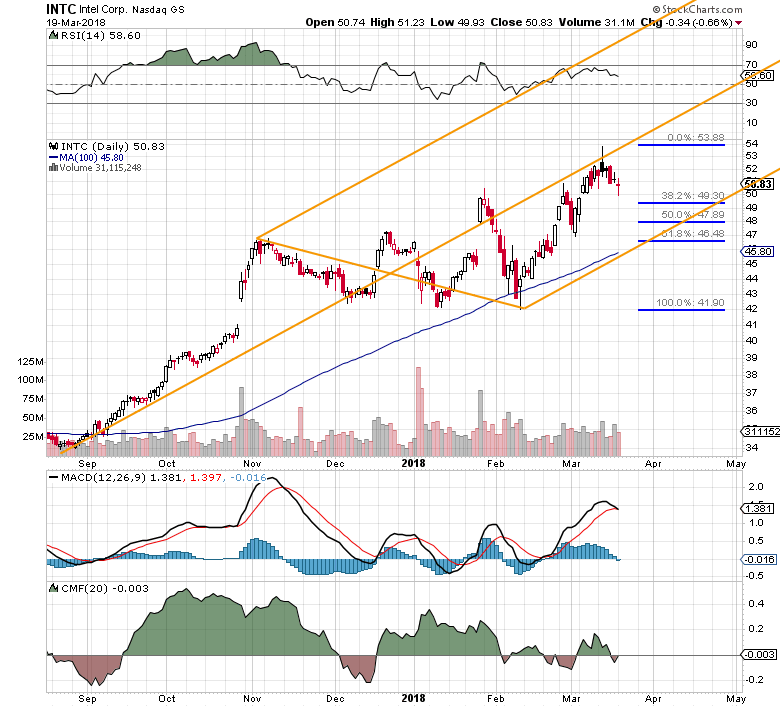 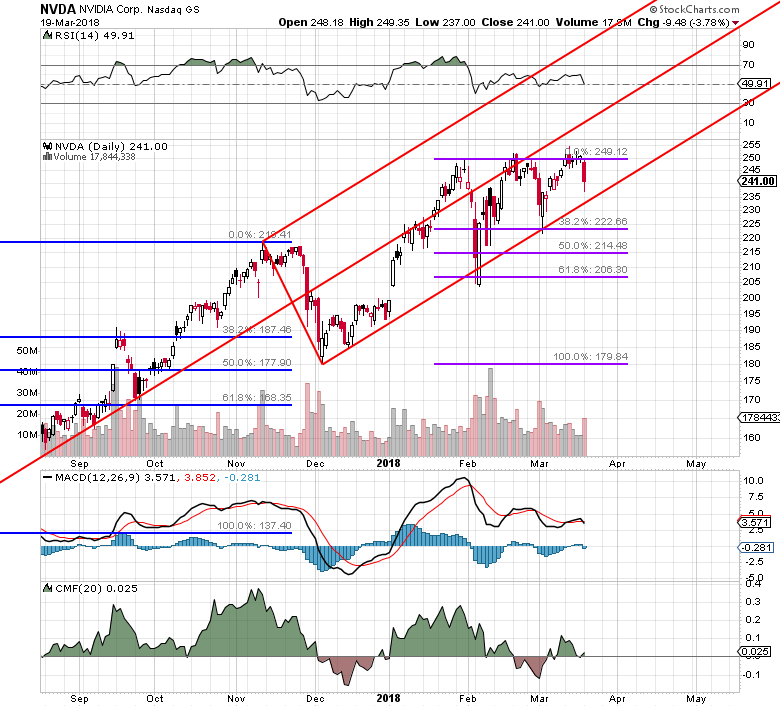 A lot of these stocks might have had a rough day (or several rough days), but they either held at technical support or remain on trend. But look at General Electric (GE)  . It's remained on trend, but has failed at technical resistance: 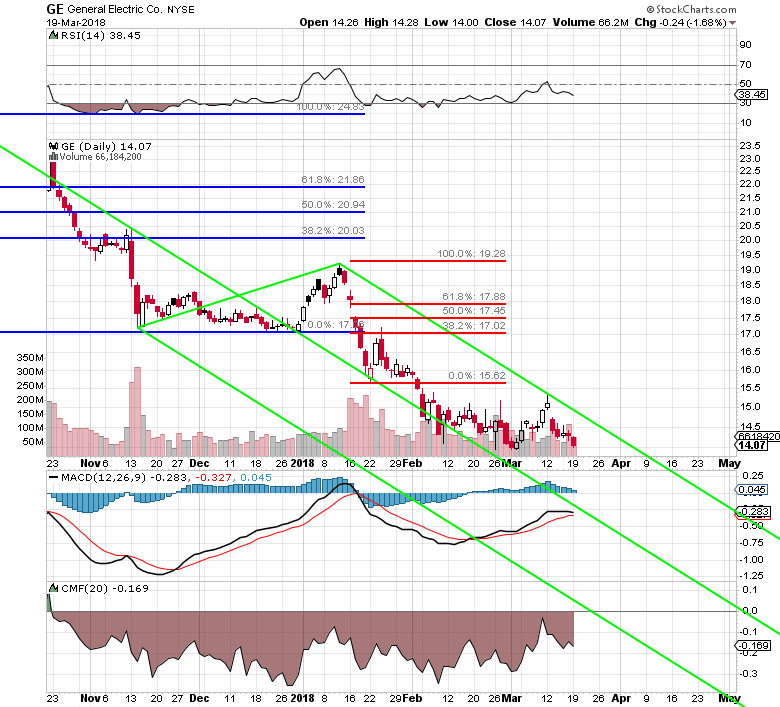 These are my levels to watch on Tuesday for where I think that the S&P 500 and the Russell 2000 might either pause or turn:

Get an email alert each time I write an article for Real Money. Click the "+Follow" next to my byline to this article.
TAGS: Investing | U.S. Equity | Financial Services | Technology | Consumer Discretionary | Stocks