I know that many of the oil analysts out there have gone weak on me. Unable to believe in the inevitable rebalancing of the oil market, they continue to see long, flat markets in oil prices coming for the next year, perhaps two. Even OPEC and the IEA, in need to put out conservative projections, are only looking for $60 oil at best by the end of 2017.

You know I think they're all wrong. But that's not what this column is about.

In searching for investments in an oil environment where I still think that oil prices are going much higher, we've been picky -- staying away from certain sub-sectors, particularly offshore drillers. But one thing you can say about the offshore players is that if and when oil makes a big move higher, those stocks are going to be among the biggest percentage winners.

But which one, if any of these, is worthy of even a speculative position? The inventory of rigs for offshore work has greatly overrun demand for likely many years to come and needs to be generally cut. The impetus for offshore assets to be developed has dulled in light of onshore shale assets and the relatively flexible and short commitments needed to bring those to market. In comparison, offshore assets require very long-term commitments of capital and crews.

So in the family of offshore players, including Transocean (RIG) , Noble (NE) , Seadrill (SDRL) , Diamond Offshore (DO) and Ensco (ESV) , I've thought that at least one of these, if not two, would ultimately need a restructuring or outright bankruptcy to again make the sub-sector investable. And those that were likely to remain would be those that had somehow managed to both scale down and update their fleets during this period of weakened cash flows and strained debt positions. A very tough charter, to say the least.

That's why today's move from Transocean in its sale of its complete jack-up rig fleet for $1.35 billion has piqued my interest. Now, Transocean has in many ways been one of the worst of the offshore players, despite being one of the largest -- its fleet is the oldest and its moves to update rigs has been an ongoing battle for the last four years. Debt has been a constant problem too, with continuing service of some of the most expensive high-yield issues hanging over its head. Still, the company's expertise in ultra deepwater drilling is unsurpassed, and that unique ability is what Transocean and its investors are counting on, as oil prices improve.

Looking at Transocean today, however, it's not a pretty picture: Of its 30 ultra-deepwater rigs, 19 remain either stacked or idled.

Yet, the sale of its complete shallower rig fleet of 15 jackups, including five that are yet to be completed, indicates that it is making the very tough choices going forward -- concentrating on becoming specialists with its deepwater expertise going forward. 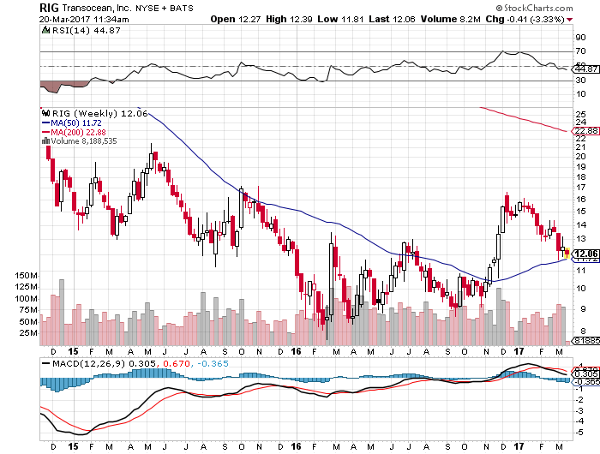 Looking at the chart doesn't inspire a ton of confidence either, but there are one or two good signs here. Despite the general downtrend the stock has been carrying since it's mini-breakout in November last year, its 50-day moving average, which once was strong resistance, now looks like it could be a support line for the stock's next trend -- upwards.

In playing a very tough waiting game for oil to rebalance and finding stocks to invest in for the long haul, offshore has been one of my least favorite sub-sectors to play. But it has to be admitted that finding the right offshore player could be one of the better opportunities once oil begins to trend solidly higher -- and Transocean could be that player.

Get an email alert each time I write an article for Real Money. Click the "+Follow" next to my byline to this article.
TAGS: Investing | U.S. Equity | Basic Materials | Energy | Markets | Mergers and Acquisitions | Oil Equipment/Services | Stocks