We wrote about Baxter International (BAX) not quite a month ago, and we thought this was a good juncture to review our bullish stance. A month ago, BAX was just breaking out over its 2016 highs. Prices have continued higher, with confirming indicators. Let's take a look.

In this updated daily bar chart of BAX, above, we see the rising 50-day and 200-day moving averages. In the latter part of February, we can see a bullish golden cross as the 50-day average moves above the 200-day average line.

It is hard to see what volume is doing right below the price chart, but the On-Balance-Volume (OBV) line turns bullish in December and its subsequent uptrend tells us that buyers of BAX have been more aggressive the past four months.

The Moving Average Convergence Divergence (MACD) oscillator gave a cover shorts buy signal in December and an outright go long signal in January as it moved above the zero line. The MACD oscillator has crossed recently to a take profits mode.

In this weekly chart of BAX, above, we can see how prices broke out above $50. The trend-defining 40-week moving average line is rising and prices are not too far above the line.

The weekly OBV line has been bullish since January 2016 and is close to a new high. The weekly MACD oscillator crossed to a buy above the zero line in late January and remains positive. 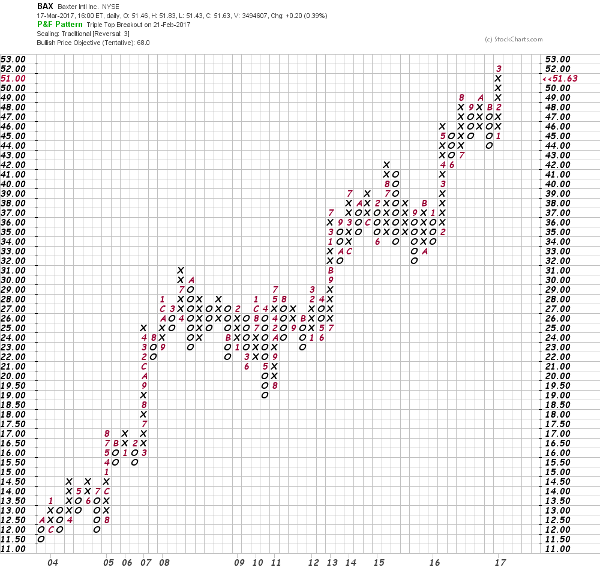 In this Point and Figure chart of BAX, above, we can see the breakout at $50. The potential upside price target for BAX measures to $68 now.

Bottom line: traders can maintain longs with the breakout above $50 and sell stops could be moved up to a close below $49; $68 is our price objective.

Get an email alert each time I write an article for Real Money. Click the "+Follow" next to my byline to this article.
TAGS: Investing | U.S. Equity | Markets | How-to | Stocks