"That's another fine mess you've gotten me into." -- Oliver Hardy

Markets took Gary Cohn's resignation as National Economic Council director a bit better in hindsight than most of us had anticipated. Perhaps some of that relief came from the fact that Wall Street already knew and was comfortable with Larry Kudlow, his replacement.

But likely more than that, markets also noticed that the Trump administration has carved out a "special place" for both Canada and Mexico as far as those much-hyped steel and aluminum tariffs are concerned. (Or at least Canada and Mexico will get special treatment for as long as NAFTA negotiations drag on.)

Of course, the spotlight will continue to shine ever more brightly on trade as players watch how President Trump approaches China and protection of U.S. intellectual-property rights. Many clearly placed bets on this last week, as EPFR Global reported that U.S. equity inflows hit a record $43.3 billion for the week ended last Wednesday.

Equity inflows are now running ahead of bond inflows for the first time in roughly five years. But don't look for that in Monday morning's equity-index futures, as S&P 500 futures seem to have rolled off of a cliff after European markets (also trading in the hole) opened for business.

However, how the week plays out will have less to do with Monday's trading and more to do with the Federal Open Market Committee's forward-looking guidance this Wednesday. (Not to mention how new Fed chair Jerome Powell presents himself at his first post-FOMC press conference.)

Yes, there's near certainly among players that the FOMC will tack on another quarter point to the Fed funds rate. That's already priced in. As of December, the famous Fed "dot plots" indicated a consensus of three Fed rate hikes this year.

However, Chicago futures traders have flirted for weeks with a roughly one-in-three chance of a fourth rate hike by year's end. For now, that's the key market variable to watch.

Order in the Court

A trial over the proposed merger of AT&T (T) and Time-Warner (TWX) finally starts Monday, and just about everyone who invests in media or telecom stocks will be watching. The U.S. Department of Justice and AT&T will present their respective cases before U.S. District Court Judge Richard Leon in response to the DOJ's lawsuit blocking AT&T's intended $85 billion takeover of Time Warner.

What's at stake? More than you think -- for one thing, the question of just who's a competitor and who's not in today's media market.

Does the government recognize the impact of cord-cutting upon cable TV? If so, then this deal isn't quite as significant as it would otherwise seem.

In my opinion, why would you not consider Netflix (NFLX) , Amazon Prime from Amazon (AMZN) and other so-called "over the top" streaming services to be part of the modern TV world? That's how many of us watch everything other than news and sports these days.

Of course, if the court views these services as a different type of business altogether, that would mean the merger of AT&T's DirecTV and Time Warner Cable would create a much more dominant player in the TV marketplace. (A dominant position in a dwindling business, if you ask me, but I don't get a say in this.)

If the DOJ successfully blocks the AT&T/Time-Warner merger, what will that say about the 2011 merger of NBC Universal and Comcast (CMCSA) ? Will that deal need modification?

And what about the plan by 21st Century Fox (FOXA) to buy the portion of Sky Plc (SKYAY) that it doesn't already own? Or the $31 billion bid that Comcast has already made for Sky? And what about the agreement by Walt Disney Co. (DIS) to buy much of Fox -- an agreement that prevents Disney from preparing its own bid for Sky?

Who are the potential winners and losers here? I think the winners will be whoever comes away with the most content and the most potential client exposure.

There will be short- to medium-term movement based on how the DOJ defines the TV business. But over the long term, does anyone really see demand for cable-like entertainment making a comeback as my generation withers in numbers and is replaced by Millennials who cut the cord upon adulthood?

Has anyone noticed how NFLX's stock price has risen since the company released its latest earnings report? It doesn't take a genius to see why Disney chief Bob Iger has take DIS in that direction.

At the end of the day, Disney is the king of content in my opinion. And after placing one foot in each part of the TV world (old media and new), DIS might be one of the few companies in the business with any pricing power left.

Facebook (FB) is down some 3.6% in premarket trading on Monday as I write this.

Cambridge Analytica reportedly used the data while doing work in Donald Trump's 2016 presidential campaign, but denies that it misused or even held onto information that it gained from up to 50 million Facebook users.

The company also claims to have fully complied with Facebook's terms of service, and Facebook Deputy General Counsel Paul Grewal insists that there was no breach of those terms. He claims that Cambridge Analytica "requested and gained access to information from users who chose to sign up ... and everyone involved gave their consent. People knowingly provided their information, no systems were infiltrated, and no passwords or sensitive pieces of information were stolen or hacked."

However, both U.S. and U.K. lawmakers made noise about this over the weekend. Massachusetts Attorney General Maura Healey indicated through online posts that she would investigate. British Parliament member Damian Collins also expressed interest in having Facebook CEO Mark Zuckerberg testify about the possibility that social-media manipulation impacted the 2016 Brexit vote.

Facebook is outperforming the S&P 500 so far this year -- up about 5% vs. 2% for the broad market -- but badly lags the other FANGs. That might not be a fair comparison given the incredible year that both NFLX (+65%) and Amazon AMZN -- which is up 34% -- seem to be having. But FB lags despite being debt free and boasting the FANGs' best profit margins.

What gives? Do these concerns weigh on the stock's performance?

Zuckerberg has already laid out plans to improve security and slow down the prevalence of "fake news" even if that impacts ad revenue. But believe it or not, that commitment could be putting a dent in investor perception of the firm's direction.

Let's go to the chart to explain why I won't buy Facebook if it gaps down Monday.

Those who bet against the FANGs tend to get hurt, so I won't be so bold as to short FB. But I might just take a pass when it comes to a likely dip on Monday.

There are only two things that I see on this chart: 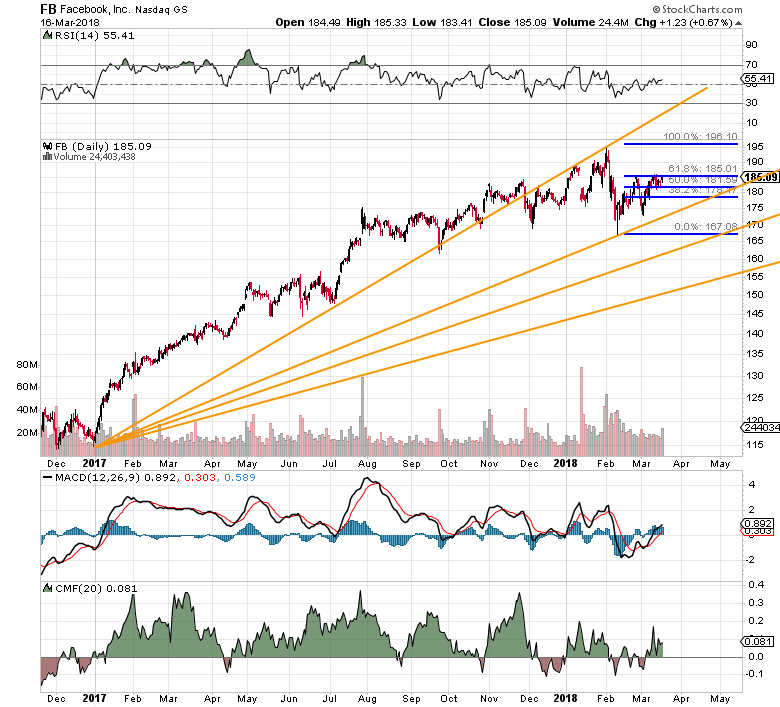 First, the Fibonacci Fan is telling us that the stock will have to reach prices in the $210 area within a couple of weeks for FB to regain trend. If it takes longer than that, Facebook will have to attain considerably higher prices on the same trajectory. One can also easily see a flattening of the stock's ascent so far 2018.

But the second thing that I see is a positive for Facebook. The stock has found help at the fan's first line of support twice now.

That said, the negative is that coming off of January's highs and through the lows of the stock market's February correction, FB has twice been rejected at a 61.8% retracement of that move.

On top of that, the fan's first line of support will likely face a third test on Monday morning. A prudent investor might want to watch this open before taking any action.

Chart Of The Day 2: Oracle

Oracle (ORCL) reports fiscal-third-quarter earnings Monday after the close, and Wall Street is looking for 72 cents in earnings per share (+4%) on $9.77 billion of revenues (+6%).

Oracle disappointed in December with its outlook for the company's all-important cloud-computing business. But let's not forget that the competition there from Amazon, Microsoft (MSFT) , and Salesforce (CRM) is tough.

We've seen lots of volatility in ORCL following the past few quarters' earnings releases. On top of that, we can see here that the name continues to make higher highs and lower lows (although not really in such a tidy pattern): 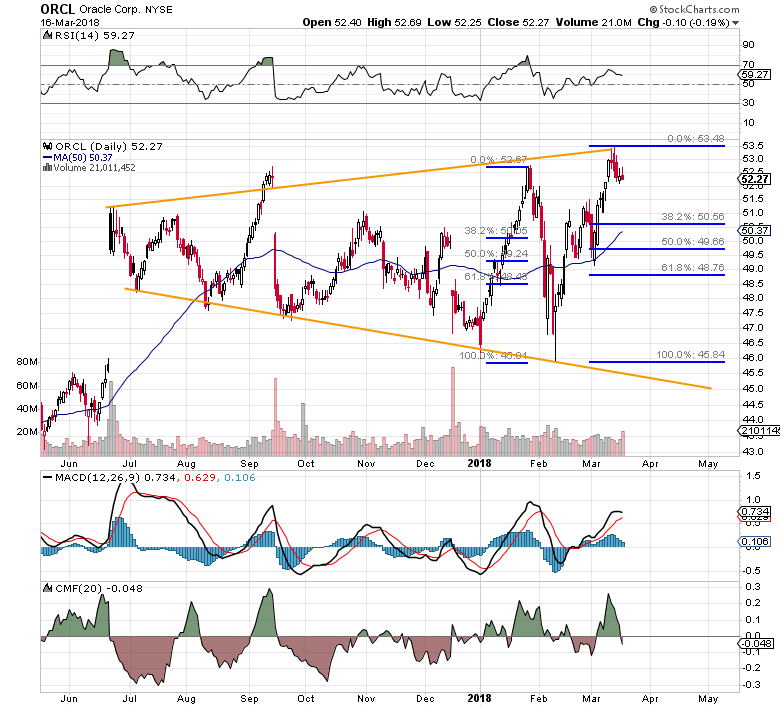 This broadens the range of potential outcomes following Monday evening's earnings report. So, let's say you're long the name heading into Monday's release. Do you just hope for the best? Maybe, if that's worked for you before.

But while I'm long Oracle as well, I've cut my exposure in half. I'm looking for a move of $3-ish overnight on Monday night.

According to my handy dandy Fibonacci levels, there could be some support in the $50.50 area, although a February pullback reached a 100% retracement of ORCL's previous rise. That said, that was during February's "flash correction" for stocks, so I don't know how trustworthy the move is.

The risk would be in having to pay $50.50 for shares (or buying back the puts) when ORCL is trading lower. Now, that $50.50 is well above my current cost basis, but at least this would reduce my shares' net to something like $49.69 thanks to the premium that I'd receive on my options trading.

Of course, Oracle's last sale price will impact the relevant strike prices and premiums offered after options markets open Monday morning, but I think you get the idea.

These are levels to watch Monday for where I think that the S&P 500 and the Russell 2000 might either pause or turn:

(An earlier version of this column incorrectly referred to trading Oracle options with a Feb. 23 expiration date rather than the correct March 23 one.)

Why I'm Building Positions in This One Group of REITs

Want to invest in a sector that's getting bailed out? You've found it here.

Universal Stainless & Alloy Products Is a Stock Worth Following