First Horizon National (FHN) has weakened slowly this month. I cannot clearly tell if investors have been scale-down buyers or if FHN has fallen of its own weight. Until things are clearer on the "horizon," I would defer purchases of FHN.

The On-Balance-Volume (OBV) line is an issue in that it peaked in December and has been slowly declining. A declining OBV line is a sign that selling has increased during the price weakness. Increased activity selling on a decline says that investors and traders want out. The Moving Average Convergence Divergence (MACD) oscillator is in bearish territory below the zero line -- an outright sell signal.

In this weekly chart of FHN, above, we can see that prices made a big markup last year. It may be hard to see, but the recent price action shows a downside reversal -- a close below the low of the high week. This reversal does not give us a price target, but it is relatively quick turning compared to other reversal patterns. The weekly OBV line has been trending lower over the past three months and the MACD oscillator just crossed to a take-profits sell signal on a weekly timescale. 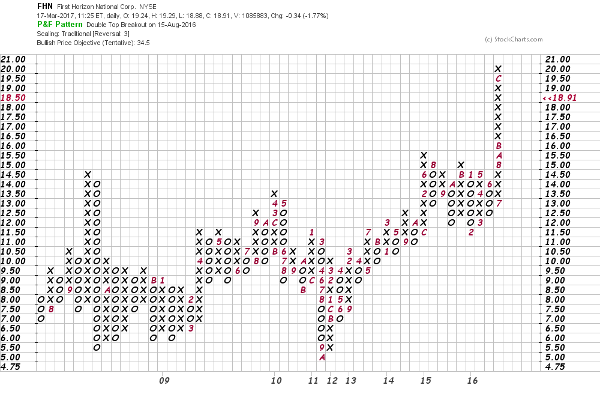 In this Point and Figure chart of FHN, above, we can see an upside breakout from a large base. We have an initial upside target of $34.50 for FHN, but it is almost in a 3-box down column and a deeper dip to $18.50 will do it.

Bottom line: FHN looks like it could achieve higher highs in the long term, but unfortunately in the short term it looks vulnerable to further declines. I would not look to buy or short FHN here. I plan on standing aside until things look clearer.

Get an email alert each time I write an article for Real Money. Click the "+Follow" next to my byline to this article.
TAGS: Investing | U.S. Equity | Financial Services | Technology | Markets | Stocks