Vertex Pharmaceuticals (VRTX) broke out to new highs this month, breaking the highs of July and late January. Can the rally continue and what price targets might the charts reveal? We last checked the indicators back in early September, and said, "The bull market in shares of VRTX does not want to stop. Trade from the long side, but have a sell stop below $149 in case of a reversal. On the upside $195 and $200 are our next potential price targets." Let's check how the charts look now.

In this daily bar chart of VRTX, below, we can see that longs would have exited in late October as prices broke to the downside. A new uptrend did not get underway until late December and a pullback February may have shaken out short-term traders again. This month VRTX finally broke over its July and January highs. Currently VRTX is above the rising 50-day moving average line and the rising 200-day line. VRTX dipped towards the 200-day line in early December and again in February. The On-Balance-Volume (OBV) line has been in a new rising trend since early December and the Moving Average Convergence Divergence (MACD) oscillator is above the zero line but poised for a possible crossover and take profits sell signal.

In this weekly bar chart of VRTX, below, we can see a base in 2016 and a strong rally beginning in March of 2017. The rising 40-week moving average line was successfully tested twice.The weekly OBV line has been positive since late 2016. The weekly MACD oscillator has recently turned up to a fresh outright go long signal from above the zero line.

In this Point and Figure chart of VRTX, below, we can see a large accumulation pattern and a triple top breakout. A $197.78 price target is shown. 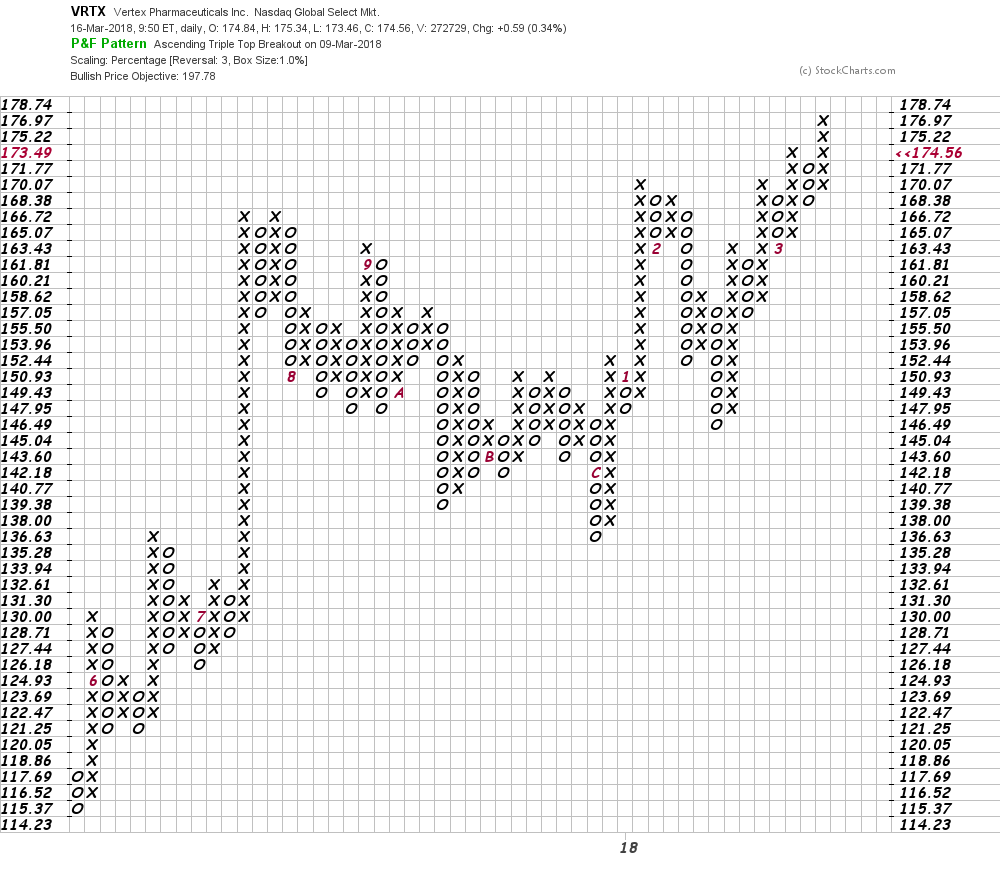 Bottom line -- our previous trade suggestion on VRTX was stopped out but that does not mean we don't get back on the horse. Traders could approach VRTX from the long side again looking for gains to the round number of $200 risking below $155 now.