Oracle (ORCL) may be considered "old tech" by some market observers, but it can really get up and go like "new tech" when it has an earnings beat. ORCL rallied strongly overnight in response to their latest numbers. Our charts do not reflect this pre-market activity, but they were already bullish. Let's take a look.

The On-Balance-Volume (OBV) line turned up in June last year and got a fresh rally going in late October. A rising OBV line tells us that buyers of ORCL have been aggressive in accumulating shares. The trend-following Moving Average Convergence Divergence (MACD) oscillator turned up above the zero line (bullish) in late January and could issue a new go long signal in the next few sessions.

In this weekly chart of ORCL, above, we can see that the gains in price go back to late 2015. ORCL has emerged from a base pattern that goes back to mid-2015 -- and you can draw a neckline across $42.

Prices are above the rising 40-week moving average line. The weekly OBV line is OK, but a new high on this indicator would reinforce the price strength we see. The weekly MACD oscillator turned bullish the end of January. 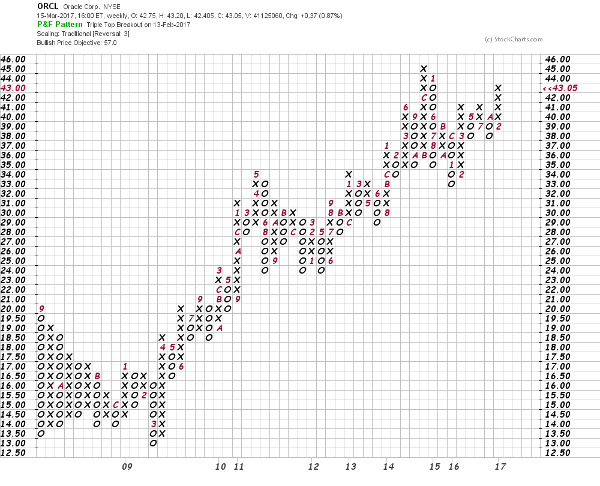 In this weekly Point and Figure chart going back to 2008 we can see that the strength in ORCL is not a new event. A trade at $46 would be a breakout on this chart and give us the opportunity to project a potential target of $57.

Bottom line: the latest gains in ORCL are just a continuation of the rally that was already underway. The long side remains attractive as long as $42 is not broken. The $57 to $60 area is our upside price objective.