Cisco Systems (CSCO) broke out of a sideways consolidation pattern in February and has leveled off after a quick sprint higher. Can CSCO resume its rally and march to still higher highs? I think so, but let me show you the latest charts and indicators. (Cisco is a a holding in TheStreet's Action Alerts PLUS portfolio.)

In this daily chart of CSCO going back 12 months, below, we can see a rally from a May low to early September followed by a triangle-like consolidation to an apex in January. A fresh uptrend gets under way in late January that seems to have stalled a little this month. CSCO is above the rising 50-day moving average and the rising 200-day moving average. The 200-day average was successfully tested in December and January.

The On-Balance-Volume (OBV) line has been bullish the past year and mirrored the rallies and consolidation pattern. The Moving Average Convergence Divergence (MACD) oscillator has been above the zero line for much of the past year and dips in October and December below the line were short lived.

In this three-year weekly chart of CSCO, below, we can see a different view. One way of looking at this chart of CSCO is to imagine a broad consolidation pattern from early 2014 through mid-2016. Prices swing sideways in a $22 to $29 range before an upside breakout and rally to $32. From $32 there is a slow pullback to the breakout at $29, which coincides with the rising 40-week moving average line. The weekly OBV line recently moved up with the price action and the MACD oscillator has been bullish since May.

This long-term Point and Figure chart of CSCO, below, goes back to 2008. An important breakout level was $29 and opened up the possible target of $58 for CSCO. 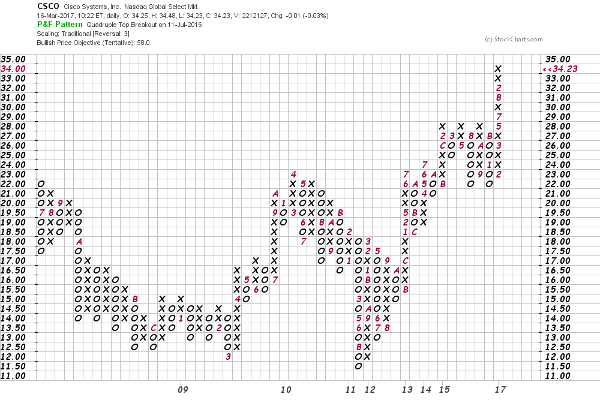 Bottom line: I suggest trading CSCO from the long side risking below $32 for now.