I have been focused on Square (SQ) since August when I first began writing about the name on what feels like a bi-weekly basis. The stock traded in the mid-upper $20s back then. What I wouldn't give for the buy-and-hold approach rather than the options trading strategy knowing what I know now. Of course, we can say that about every trade, can't we?

Just last month, I played with the stock into earnings as the shares traded $46.65. My upside target of $52 has been surpassed, and after adjusting my earnings straddle into call spreads, I can cash out for a maximum profit Friday or take a bit less and cash out today removing the overnight risk. I am cashing out. The reason: I believe we'll need some time to consolidate if shares are going to take another leg higher. 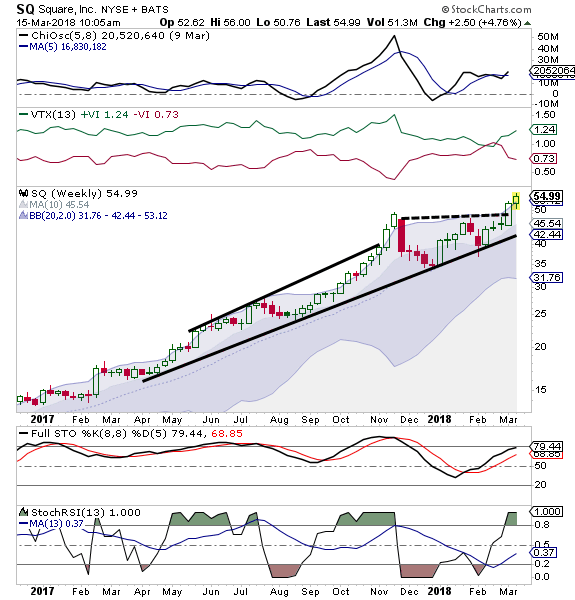 Ironically, this view comes in some contrast with the weekly chart of Square. With the close over resistance (black dotted line), Square broke out last week and the continued push higher this week confirms that move. The strong uptrend can be seen dating back to early 2017 when shares were in the low teens. That's quite a run. But the best buying opportunities in terms of risk versus reward have come on a test of that uptrend line which is all the way down at $42.50 right now. That doesn't mean Square can't continue higher. I could argue we're extended trading through the Upper Bollinger Band with a StochRSI maxed at 1.00 and Full Stochastics approaching 80, but that didn't stock the stock in October 2017.

The difference I see now is that October-November run was boosted by the Square Cash Bitcoin application announcement. I don't foresee another announcement like that one forthcoming in March or April. I've seen Jim Cramer talk about how Square should decouple from bitcoin chatter and I disagree. The shares have remained strong recently even as bitcoin has sold off hard yet again.

I believe the market is beginning to interpret the link correctly. Square would simply facilitate transactions, likely more on a peer-to-peer basis than a consumer-to-business one. In that sense, the greater the volatility, the better. It often means more trades among Bitcoin  (BTC) buyers and sellers. Since Square is simply looking to be an exchange of sorts making small money from each transaction (think (ICE) , (CME) , or Nasdaq) this should benefit them. While it's great for businesses to say they will accept bitcoin through a Square app, find me a consumer that will spend their bitcoin. That's the greater challenge, so our focus should be on the peer-to-peer trading facility offered by Square. In that sense, the more volatility, the better. So remind folks of the link, but make certain they understand the link.

As far as the core business goes, Square is pushing all the right buttons. The company has moved well beyond the individual or small business and into enterprises. Neither Venmo nor Apple (AAPL) Cash is gaining ground on Square in any of its key markets. At some point, that may change, but I'm surprised at how many folks I meet who have still not heard nor never used Venmo. As Square (and Venmo) reach outside U.S. borders, top- and bottom-line numbers should continue to expand.

Yes, I do like Venmo parent, PayPal (PYPL) as well. I think you can own both. That being said, I'd wait for both to be about 10% lower for jumping in on the share side. If I were looking to make any move, I'd be a seller of puts or put spread far out-of-the-money expiring no later than June. Otherwise, I favor being patient here and waiting for both SQ and PYPL to come to you.

Get an email alert each time I write an article for Real Money. Click the "+Follow" next to my byline to this article.
TAGS: Investing | U.S. Equity | How-to | Options | Stocks